Vivaldi
Dorilla in Tempe – Opera/Melodramma eroico-pastorale in three Acts to a libretto by Antonio Maria Lucchini [sung in Italian, with Italian surtitles] 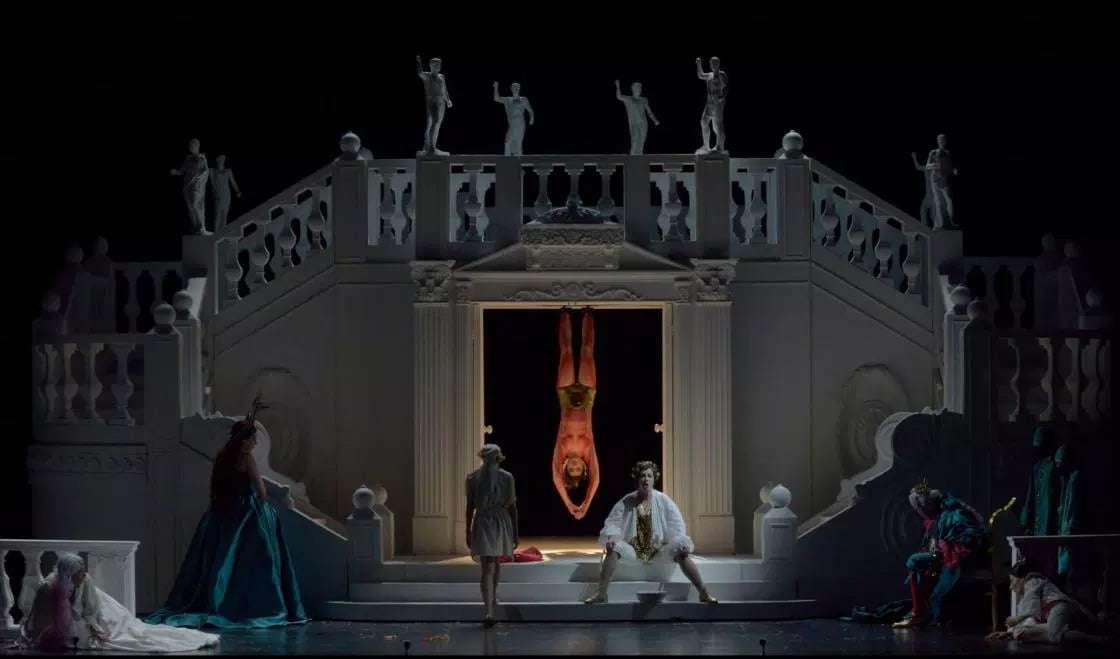 If Vivaldi’s Dorilla in Tempe (premiered 1726) is known at all, it is probably for the fact that its opening chorus in praise of the season of Spring borrows the music from a certain Concerto by the composer, published just the previous year and already widely famous. That prompts Fabio Ceresa to follow the idea of the seasons through his production, an imaginative stroke that works rather well. Once the threat of the dragon, Python, to the peace of Admeto’s kingdom of Tempe in ancient Thessaly has been eliminated (requiring the sacrifice of the latter’s daughter, Dorilla, but averted by the heroic action of the shepherd Nomio), Dorilla and Elmiro celebrate their love at the height of Summer, after the languid passage of that Concerto’s first movement is played as the prelude to Act Two, and during which shepherds and nymphs disport themselves in the heat. Autumn is heralded with some bars of the slow movement, calling forth the banquet in which the fruits of harvest may be enjoyed, and a hunt (both of which are specified in the opera itself), whilst Act Three begins with the shivering chords which open the ‘Winter’ Concerto, a pathetic fallacy for the icy confrontations between Dorilla and her father (who demands that Elmiro be sentenced to death for their absconding after requiring that Dorilla be married to Nomio as a reward for her salvation) and Eudamia and Filindo (both caught up in events in that Eudamia loves Elmiro, and Filindo loves Eudamia, hopelessly in each case). The suggestion, then, is of a cycle that returns to order but only after undergoing a series of trials and conflicts, through which the characters come out at the end on a higher plane of experience and insight.

An underlying order of classical Arcadian beauty is implied not only by Nature in this production, but also by the man-made environment, as Massimo Checchetto’s set constitutes a double staircase with balustrades, as though leading up to the piano nobile of a villa by Palladio – as central a figure in the art and culture of Venice and the Veneto region, as Vivaldi is in its music. That set facilitates the stylish choreographic flow of the characters from one scene to another, whilst also reminding us that such Palladian architecture is as thoroughly theatrical as Baroque stage-sets could also be essentially architectural; and if both art-forms are rooted in Nature in one sense, they are also both highly artificial in another. In the deliberate but artful gestures of the characters, Ceresa’s production is correspondingly sympathetic to the Baroque ethos of Vivaldi’s opera without being drily authentic or historicist. Actions are updated to some extent in order to make a more direct emotional appeal (the skinning of a human corpse to evoke the possible death to which Elmiro is sentenced is the most striking such scenario) and though the vibrant costumes are generally of the eighteenth-century, the togas of the nymphs and shepherds are a nod to the ancient world. Having Dorilla crowned May queen during the floral festivities which open this opera is a canny touch which coincides with the shift from April to that month in the calendar.

In following the deliberate, even almost ritualistic, gestures of the production, Diego Fasolis’s performance with the Orchestra of La Fenice would otherwise tend to seem rather lax, given the usual rhythmic propulsion usually encountered and expected of Vivaldi’s vigorous music; his recording of the opera for Naive’s Vivaldi Edition demonstrates that he is able to adopt a more lithe reading. But here the performance achieves a sensitive and cogent rapport with the staging. Furthermore, the received score is technically a pasticcio as it is only the version which Vivaldi prepared for a revival in 1734 which survives, not that for any previous runs, and which interpolates some stylistically different arias by Leo, Hasse, Giacomelli and Sarra. Altogether the musical interpretation runs seamlessly with the production, pointed up by Fasolis with intermittent points of drama to sustain tension or provide contrast. For example Admeto’s recitatives are accompanied by organ, not harpsichord like the other singers, ostensibly underlining his regal authority, but Michele Patti’s interpretation of him as a somewhat blustering, ineffectual figure makes that ironic, bringing some comedy that leavens the near-tragedy of the plot. It reminds us again of its theatricality, and that we need not take it too seriously perhaps, or at least that it comprises just a hint of the wry humour of Vivaldi’s Venetian, literary contemporary, Carlo Goldoni. If anything, Patti’s delivery is slightly dry and he could play it up a little more.

Manuela Custer sings a generally demure but solid account of the title part, which only occasionally calls for extravagant coloratura. More of that is given to her lover, Elmiro, for which Lucia Cirillo combines tenderness and vocal force. Véronique Valdès is impressively agile as Nomio, bringing rigour to her equally vivid music accompanying the character who turns out to be the god Apollo in disguise; after seeing the steadfast loyalty of Dorilla and Elmiro, he commands that they shall wed, relinquishing his own claim upon Dorilla, and ascending over the stage in a panoply of sunrays, bringing the opera back to its bright Spring-like opening. Eudamia and Filindo – dressed in the same sumptuous turquoise as Admeto to bring their scheming to upset the partnership of Dorilla and Elmiro visually and dramatically within the orbit of the king’s stern control – tend to be a point of light-hearted contrast to the courage of the latter pair, and are eventually also commanded to wed by Apollo. Valeria Girardello expresses something of her character’s wiliness and determination, whilst Rosa Bove is an excitable Filindo – like Cherubino, somewhat impetuous and at the mercy of his passions.

This is a successful production, then, which is both visually lavish within well-defined parameters and musically colourful, making sense of the rhythms and contours of a Baroque opera, showing how it is possible to realise, and even thrive upon, those elements of that genre which can often now seem alien to audiences, without making effect for its own sake.