Elena Langer
Figaro gets a Divorce – Opera in two Acts to a libretto by David Pountney after Ödön von Horváth’s play [sung in English, with English surtitles] 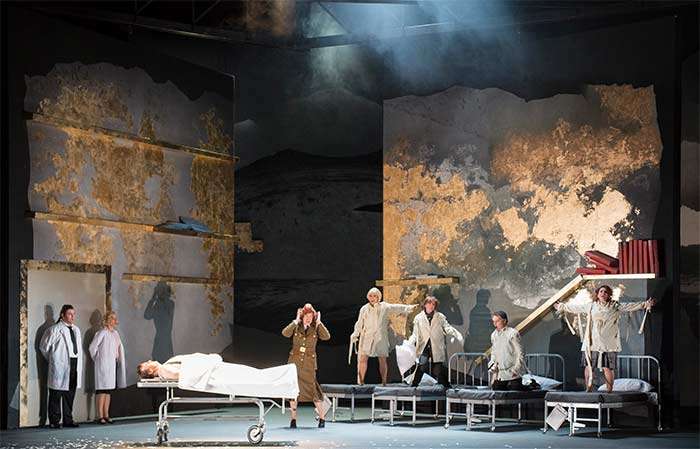 Well! Welsh National Opera’s Figaro trio ended on an impressive note with strands brought together from what had gone before in the Rossini and Mozart operas. The principal characters had traces of costuming that linked their previous incarnations and in many cases the same singers followed-though their previous appearances. However, Figaro gets a Divorce is not Beaumarchais-based but an adaptation of Ödön von Horváth’s harder hitting re-invention of Beaumarchais’s work dating from the 1930s, a setting of much relevance today with turmoil on Europe’s borders. David Pountney’s production draws that parallel vividly.

At this juncture in the story, Figaro and Susanna’s marriage is under stress; she wants children, he seems to be undergoing a mid-life crisis. The Count and Countess’s relationship is also under stress – he has a child by Barbarina called Angelika whom he and his wife have raised as a ward, and she has a child by Cherubino, named Serafin, whom the Count believes was his. The young of the next generation are in love. Cherubino is believed to have been killed in battle but faked his death. Add an enigmatic character called The Major, intent on exposing the protagonists’ secrets, and you have the plot. Brilliant idea to have the singer of Don Basilio, that wily intriguer, as The Major, and he has designs on Angelika. 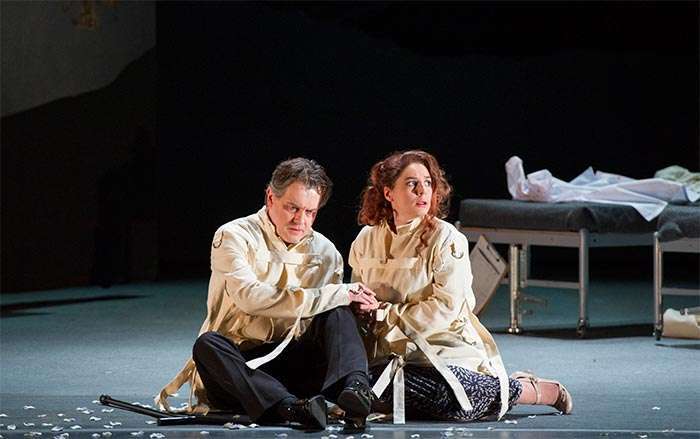 Elena Langer has composed a score of brilliance and beauty, using Mozart’s Figaro orchestra, adding accordion, piano and much percussion. There are shades of Shostakovich, Richard Strauss, Berg, Ravel and elements of cabaret, jazz and tango – yet this is hardly pastiche. There’s also a deft operatic wit at play. The score lilts and jerks but is always ear-catching, and the singers have grateful and occasionally ravishing music to sing, no more so than a duet for Serafin and Angelika accompanied by woodwinds, which has all the intensity of Strauss in similar vein.

The singers were all excellent. Mark Stone’s burnished baritone was an asset as the Count, and David Stout was a stalwart Figaro. Elizabeth Watts lavished her warm soprano around Langer’s vocal lines and was an engaging stage presence throughout. Marie Arnet was a super Susanna, every word audible, and with personality in abundance. As Cherub/Cherubino, Andrew Watts caught the various facets of his role using not only his full-sounding countertenor but skilful deployment of his natural low-baritone register. Central to the success was Alan Oke, whose penetrating tenor made every word of this mysterious figure brim with implied menace and yet managed this with vocal allure. The lovers, from Naomi O’Connell and Rhian Lois, blended superbly.

Figaro gets a Divorce would certainly bear repeated listening and is well-worth catching.