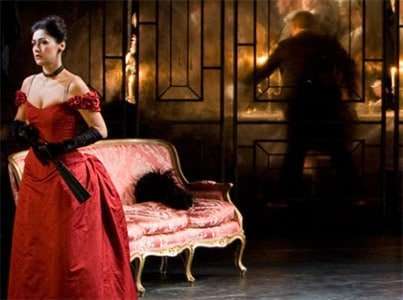 This was a frustrating evening. With sections of the audience suffering from tubercular diseases considerably more serious than Violetta, all the quiet moments where much of the dramatic tension is built were punctuated by energy-sapping coughs and splutters. One could only feel sorry for the singers, Linda Richardson especially, under these circumstances. That her performance, both vocally and dramatically, improved as the evening progressed made this the more regrettable. She has the vocal guns and technique for all facets of the part, but dramatically this Violetta was rather cool and did not always engender sympathy until racked by disease. Her passionate “Addio, del passato bei sogni ridenti” was the highlight. It was at this moment also that the conducting of Simon Philippo and the playing of the WNO Orchestra came into their own – the simplicity and emptiness of the accompaniment to each stanza judged perfectly.

There were other orchestral revelations too. The off-stage banda effects of the first Act were most effectively managed; even the contribution of the percussion was clearly audible, rarely so. Elsewhere, Philippo was in a bit of a hurry, not always singer-friendly, and in the choral finale of the second Act there were some rather forced-sounding tempo changes. That being said, the orchestra was in fine fettle: responsive, playing with warmth and a great deal of energy. 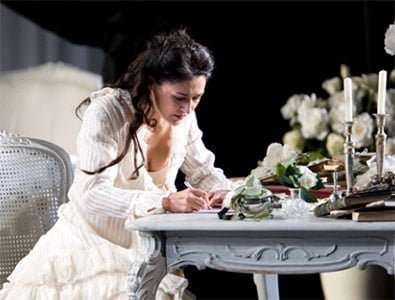 As respectively Germont père and fils were Alan Opie and Ji-Min Park. Opie raised the temperature every time he appeared. He has great presence and knows how to sing off the words and to convey their meaning. This Germont was stern but fair, and he revealed the character’s niggling sense that he had done something morally wrong very clearly at the end of his second-Act encounter with Violetta. Opie’s voice remained firm and incisive, and full of colour. Park’s Alfredo was less certain. Intonation was somewhat wayward, and he delivered his lines with little finesse at an unremitting forte. It felt as if he had not had a chance to rehearse in the Birmingham Hippodrome acoustic and was feeling his way into it. In Act Two he rallied and delivered some really fine singing. Act Three was less nuanced and dynamic light and shade was lacking. Alas, there was not much chemistry between this Violetta and Alfredo, except in anger.

There were some good cameos amongst the comprimarii, notably Jack O’Kelly’s prickly and humour-less Baron Douphol and Rebecca Afonwy-Jones’s mettlesome and meddlesome Flora. Indeed, some of the asides at Flora’s party were very dramatically pointed. The Chorus and dancers were on good form, too.

David McVicar’s dark, un-romanticized 2009 staging with Tanya McCallin’s cleverly suggestive and fluid designs create a series of powerful images throughout and help keep the drama moving along. Those who like a chocolate-box opulence to this opera might be disappointed, but the unpleasant social and moral core of the story is truthfully realised.