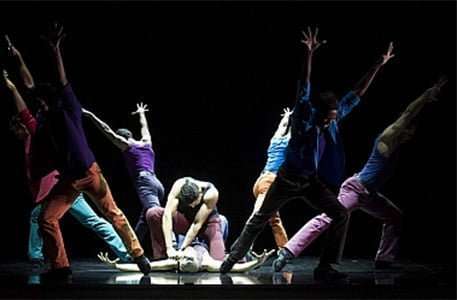 Conceived in the years immediately following the Second World War, as a commentary on the rise of anti-Semitism, by the time West Side Story arrived on Broadway in 1957 the theme had become the ever-growing gang-wars that had developed across America during the 1950s. Acclaimed as possibly the best musical ever written, although it defies such categorisation, the show presented challenges from the start as it required young performers whom could dance, act and sing to a standard higher than previously required. Those challenges remain today.

This current run is of the original production with choreography by Jerome Robbins. The director, Joey McKneely, danced for Robbins in the show’s 1989 Broadway revival – so musical heritage has been maintained. It is right that the director is also a dancer – the first conception belongs (arguably) to Robbins and though the story and music developed much in rehearsal there is little doubt that the spectacular dance routines are a key ingredient.

The roles of Maria and Tony rely on acting and vocal abilities more than dance. Katie Hall, with credits including Cosette in the West End production of Les Misérables, is excellent and outperforms Louis Maskell, whose lyrical tenor voice is no match and with acting, on occasions, that can be wooden. The cast of Jets and Sharks is largely made 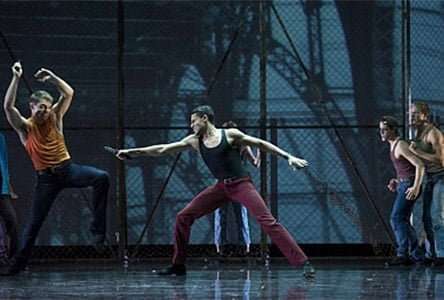 up of professional dancers – and there are great performances throughout. Sympathetic amplification of the cast and orchestra kept nearly every aspect audible, even if the rapid pace of American and Spanish dialogue meant that the odd word was lost.

Anita, played by understudy Sinead Kenny, was streetwise – appreciative of the benefits that America has to offer but realistic enough to know that being a minority race wouldn’t be easy. A delicious highlight was her duet with Maria towards the end (‘A boy like that’) sung in an acerbic counterbalance to Maria’s protestations of love. Musical direction occasionally felt rushed, most notably in the dress-shop routine – ‘One Hand, One Heart’. Elsewhere dance dictated the tempo, which are faster than you might hear in a concert performance.

‘Gee, Officer Krupke’ was splendid – a full-on, no-punches-pulled song and dance number. And, clearly out of breath by the end, Matthew Hawksley, making his professional debut, together with his fellow ‘Jets’ brought light-hearted relief to the evolving dramatic tension in the second half. And when the poignant ending was reached, it was given with genuine pathos. With music, dance and a great narrative, it is hard to go wrong with West Side Story – if you play it as it was intended. This is exactly what happens here. It is as relevant today with street gangs and post-code killings and has an enduring universal appeal.

The show runs in Stoke-on-Trent until Saturday 16 November and then moves to the New Wimbledon Theatre and continues to tour until June 2014. This is an excellent don’t-miss production.