Elizabeth – ballet with choreography by William Tuckett and a libretto by Alasdair Middleton drawn from letters, diaries, poetry and plays, including material written by her famed suitors 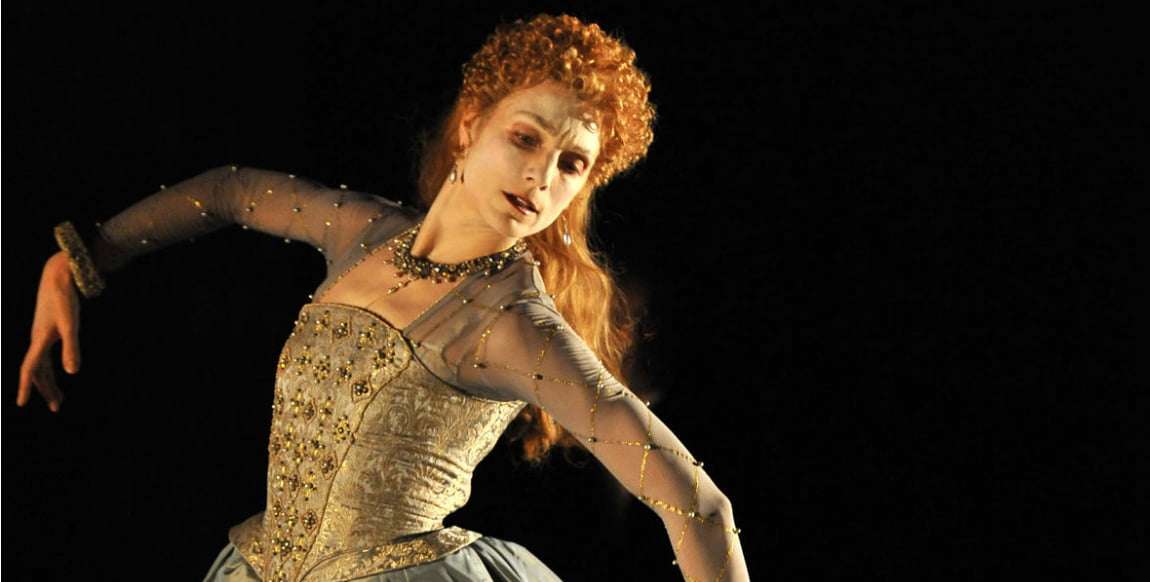 Elizabeth I would not feature high in many people’s choices as the subject for a dance work, but for William Tuckett, her relationship with the many men who featured in her life, from Walter Raleigh to the Duc d’Anjou, from the Earl of Leicester to the Earl of Essex, fired his choreographic imagination. Created in 2013 in Covent Garden’s Linbury Theatre, Elizabeth is now revived at the Barbican, and comfortably fills the larger auditorium with focussed lighting and performances.

Tuckett has gone for a distinctly old-fashioned approach, eschewing a fully-danced work in favour of something more multi-sensory: a cellist (the incomparable Raphael Wallfisch), actors who speak the words of Elizabeth I and others, a baritone who sings songs, and two dancers, Zenaida Yanowsky, recently retired as a Principal from The Royal Ballet, as Queen Bess, and her older brother Yury as the five men in Elizabeth I’s life, parts originally created by Carlos Acosta. It is, in essence, an evening of words, music and dance that, although admirably brought together, never adds up to more than the sum of its disparate parts.

Much thought has been given to the fusing of these performing worlds, and the structure of a passage through Elizabeth’s life by highlighting the men who featured in it, is deftly done, one episode seamlessly following another. Lighting is effective and there is a striking abstract red and gold arras at the back, while costumes are evocative of period without being slavish to detail. The same is to be said about Martin Yates’s musical arrangement which also hints at the historical setting without tipping into hey-nonny-no pastiche.

Miss Yanowsky has lost none of her stage presence and acts as a fascinating centre to what is not entirely focussed as a concept. She moves, as ever, with a graceful athleticism and makes every gesture tell. If she is more successful as the older Elizabeth, that is perhaps that there is more to portray; Tuckett’s combination of ballet with modern movement is serviceable enough. When it came to the other Yanowsky, things were less cut-and-dried. It is a thankless role, or set of roles, having to portray a series of preening men who, in the large part, tried to use the Queen as a stepping stone to the English throne. For them, Tuckett gave more virtuosic movement, given that Carlos Acosta premiered the work, but it is that element which sits most uneasily in the concept – ballet leaps and spins simply seem out of place. He worked hard to differentiate between the various suitors, using his artistry to mask perhaps the fact that he is the older sibling to his retired sister.

It is telling that the most striking moments in this 90-minute work were not conveyed in dance (indeed the Yanowskys were the only mute members of the cast) but rather in speech, never more so than when Samantha Bond intoned some of the eponymous queen’s own words and, most powerfully of all, Richard II’s great Act Three, Scene 3 speech from Shakespeare’s play of that name.

The cast members, whatever their function, performed with both verve and aplomb, but the underlying concept, that of a fusion of dance, speech, instrumental music and song, does not quite hold together. The quality of the performance itself could not be faulted, but the work remains resolutely dramatically low-key; admirable rather than enjoyable.