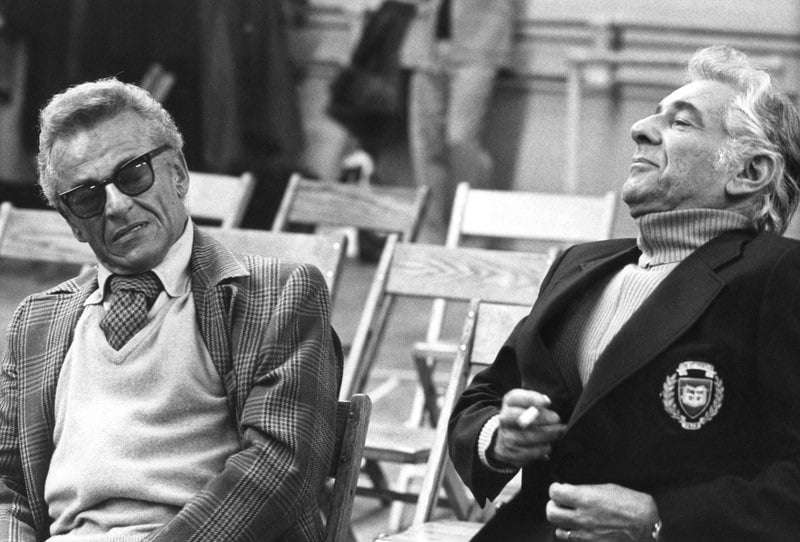 Alan Jay Lerner was born on 31 August 1918 into a wealthy family of shopkeepers. He enjoyed a good education at Bedales in England, The Choate School in Connecticut and Harvard University, the last two alongside John F. Kennedy. His musical education started in college and he subsequently studied composition at Juilliard. His career began with him writing radio scripts, during which time he met Austrian composer Frederick Loewe who was to become his most successful musical partner. Following some minor collaborations on shows that either didn’t reach Broadway or closed soon after opening, they hit gold with Brigadoon in 1947 and subsequently created what is arguably the best – and certainly the most popular with some 2,700 performances – musical of the second half of the twentieth-century, namely My Fair Lady.

This centenary tribute to Lerner opened with the Overture to that show, which, in 1956, must have been the most exciting theatrical event of the year. Just imagine hearing all those marvellous songs for the first time sung by Rex Harrison and Julie Andrews. The BBC Concert Orchestra then played three of the most memorable numbers from Loewe’s perfect score with guest singers performing Lerner’s immaculate lyrics. Ben Forster asked ‘Why Can’t the English?’ to good effect, Charlotte Page declared ‘I Could Have Danced All Night’, and Rob Houchen walked ‘On the Street Where You Live’. For an encore David Bedella did his cockney interpretation of ‘With a Little Bit of Luck’. 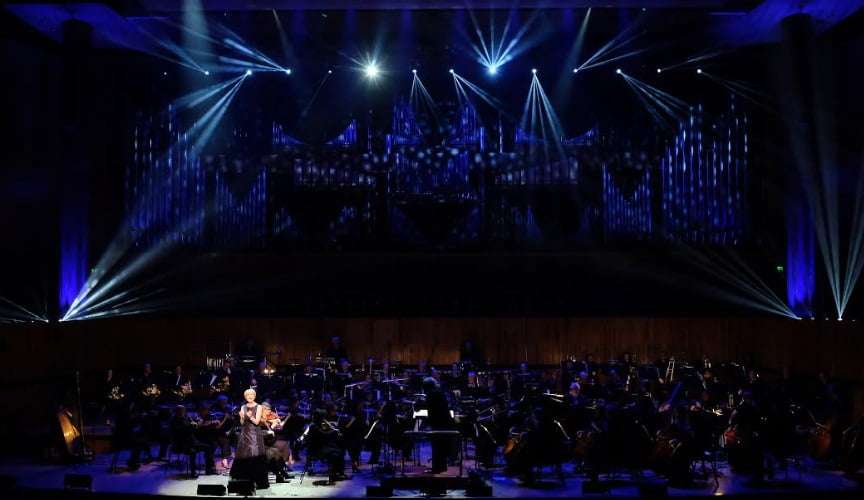 Prior to My Fair Lady, Lerner & Loewe enjoyed their first real success with Brigadoon (nearly 600 performances in 1947), a whimsical tale of a magical Scottish village that only appears once every century. A little hard to swallow now, perhaps, but the show fielded some great songs including ‘The Heather on the Hill’ and ‘Almost Like Being In Love’, here sung with requisite emotional power by Caroline Sheen and Julian Ovenden plus the Guildford School of Acting Choir.

In 1951 Lerner & Loewe enjoyed another success with Paint Your Wagon, set against the California gold rush of 1853. The BBC Concert Orchestra played the Overture in a very fine orchestration by Ted Royal presenting a medley of the great songs. Matthew Ford with Jamie Lambert and Rob Houchen and the choir performed the evocative ‘They Call the Wind Maria’. Incidentally, Lerner & Loewe’s only chart hit was with ‘Wand’rin’ Star’, which gravel-voiced Lee Marvin sang in the film version. 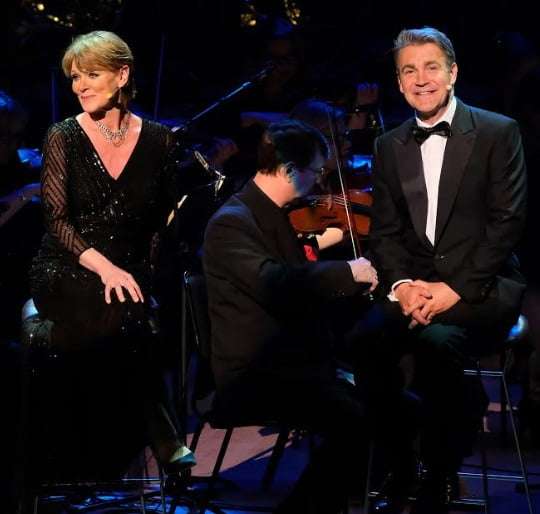 Gigi was a great success as an original film musical, winning nine Academy Awards, although its subsequent adaptation for the stage was less happy. Maybe it had something to do with the film’s stars, Leslie Caron, Maurice Chevalier, Louis Jourdain and Hermione Gingold and their director Vincente Minnelli, as much as the Lerner & Loewe score. For this concert David Bedella sang the title song and Samantha Bond and her husband Alexander Hanson performed the delightful duet ‘I Remember It Well’, still indelibly associated with Gingold and Chevalier, and concluded with Caroline Sheen, Linzi Hateley and Alexia Khadime celebrating ‘The Night They Invented Champagne’.

The final collaboration by Lerner & Loewe was Camelot in 1960, an adaptation of T. H. White’s novel The Once and Future King, about King Arthur and the Knights of the Round Table. Less successful than My Fair Lady – Camelot played under 900 performances against My Fair Lady’s 2,700. In this concert Ben Forster sang ‘How to Handle a Woman’ with consummate poignancy, while Jamie Lambert (what a voice!) put his all into a blazing account of ‘If Ever I Would Leave You’.

The five works just mentioned were the best of the Lerner & Loewe collaborations. However, Lerner also worked with other composers but, if the results were not always successful, often great songs came out of the shows. Lerner wrote with Burton Lane on the Fred Astaire film of Royal Wedding (1951) from which David Bedella and Christine Andreas did the amusing duet of ‘How Could You Believe Me When I Said I Love You When You Know I’ve Been a Liar All My Life’ (allegedly the longest song title ever) which is akin to ‘I Can Do Anything Better Than You’ from Irving Berlin’s Annie Get Your Gun, or ‘I Wish I Were in Love Again’ from Rodgers & Hart’s Babes in Arms, or ‘I Can Do Without You’ from Sammy Fain and Paul Francis Webster’s Calamity Jane. Here Christine Andreas sang that beautiful torch song ‘Too Late Now’. 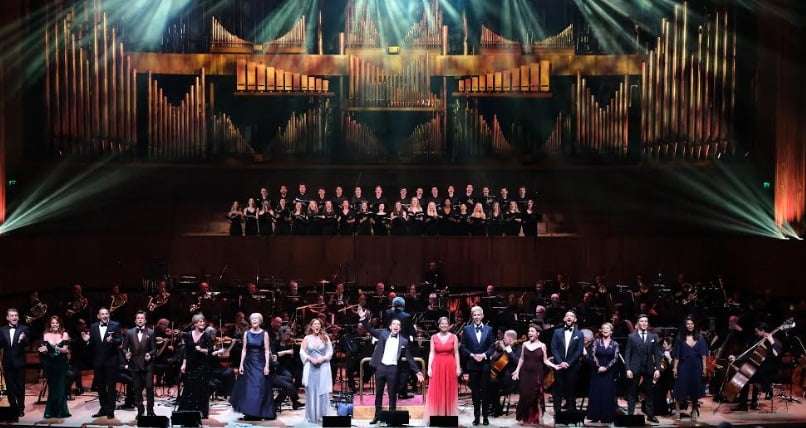 In 1965 Burton Lane and Lerner had a modest success with On a Clear Day You Can See Forever, starring Barbara Harris as a woman with ESP in a run of 280 performances. Minnelli directed Barbra Streisand in the 1970 film version. An unsatisfactory show it nevertheless produced some good songs, here including ‘Come Back to Me’, ‘Hurry! It’s Lovely Up Here’, ‘What Did I Have That I Don’t Have?’ and, of course, the title song, fervently sung here by Rachel Tucker. Another show Lerner wrote with Lane was Carmelina, adapted from the film Buona Sera, Mrs Campbell, but it lasted a mere fortnight, despite having a good number like ‘Why Him?’.

Lerner also worked with Kurt Weill on Love Life (252 performances in 1948); with André Previn on Coco (370 performances in 1969 with Katharine Hepburn, no less); with John Barry on Lolita, My Love (1971) but this one never reached Broadway; with Leonard Bernstein on 1600 Pennsylvania Avenue (seven performances in 1976 and starring Patricia Routledge). In 1985 with Gerard Kenny, Lerner adapted the comedy film My Man Godfrey as a musical but the show was left uncompleted when Lerner died on 14 June 1986 at the age of sixty-seven.

Liz Robertson, Lerner’s widow (he was married eight times and had three daughters and a son) told us that her husband was a perfectionist who worked on a lyric sometimes for days, weeks or months, just to find the right word or phrase. On Gigi Lerner was worried about a line in ‘Thank Heaven for Little Girls’ in which he says “Those little eyes / So helpless and appealing / One day will flash / And send you crashing / Through the ceiling.” Lerner reckoned you could only crash through a floor, not a ceiling. Loewe’s answer to that, however, was that they were Lerner’s lyrics and that he could do what he liked with them. No changes were made.

With composer Charles Strouse, Lerner wrote the show Dance a Little Closer for Liz Robertson and here she performed her big number, ‘Another Life’, with great passion. Sadly the show closed on opening night and was dubbed Close a Little Faster.

Where Frederick Loewe was a brilliant melodist, Alan Jay Lerner was a consummate professional wordsmith. When it came to writing lyrics he was deft, witty and urbane and wrote with the singers in mind, producing lyrics they could easily enunciate. With his command of the English language Lerner created a kind of conversational flow that had a simplicity rising out of the hard work he put into his lyrics.

For this tribute the BBC Concert Orchestra was in fine form under Larry Blank. The line-up of soloists was impressive, the Guildford School of Acting Choir added depth to some wonderful music, and the whole evening was held together by hosts Samantha Bond and Jamie Lambert. You will be able to savour the best of Lerner on BBC Radio 3 on Friday 22 June at 7.30.