A mere 50 minutes after wrapping up the evening’s ‘main’ Prom, Daniel Barenboim and members of the West-Eastern Divan Orchestra continued to make music in the Royal Albert Hall with an enticing programme far removed from the Austro-German concert which preceded it.

The prospect was mouth-watering; a Proms debut for legendary French director/sometime-actor Patrice Chéreau, best known here for his remarkable and controversial centenary production of Wagner’s ‘The Ring’ at Bayreuth in 1976 with Pierre Boulez conducting. Since then his career has followed a hugely successful path across film, theatre and opera, his productions awaited with eager anticipation. Who better then to narrate “L’histoire du Soldat” (The Soldier’s Tale) in the original language?

Boulez’s short (6-minute) Mémoriale, completed in 1985, was first up and an apposite companion piece to the Stravinsky. ‘… explosante-fixe …’ was originally prompted by the death of Stravinsky and Mémoriale was inspired by the passing of a close friend of the composer, the flautist Lawrence Beauregard. The title takes its name from a statement by the writer André Breton, that art should be “exploding-fixed”, armed with ideas and immovable at the same time. Scored for a small ensemble of strings, two horns and flute, Mémoriale is an accessible work, the solo flute floating over muted strings creating an atmosphere of reflective mediation. It received a lovely performance from Barenboim and his band, with some exquisite playing from flautist Guy Eshed, and with Boulez present to receive a warm ovation.

It was a brave choice to perform “L’histoire du Soldat in French, the story of the soldier returning home on leave who swaps his violin for a book of tomorrow’s stock prices and consequently his soul. It has been performed many times in English, not least in an acclaimed recording with Ian McKellen, Vanessa Redgrave and Sting respectively taking the roles of Narrator, Devil and Soldier. Here, Chéreau took all three roles. 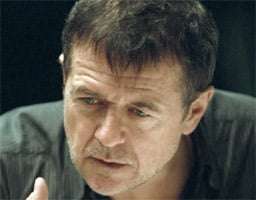 Originally intended as a touring work with seven instrumentalists, three actors and a dancer for the Princess, “L’histoire du soldat” works best in the setting originally intended, a small theatre or studio. In the Royal Albert Hall, that important sense of intimacy and compactness was rather lost.

However, the biggest problem lay with Chéreau himself. Taking on all three characters is a difficult task, but Chéreau made little attempt to vary his approach to the three roles and which made following the text difficult. (Blurring the differences between the characters may have been entirely deliberate of course.) Shorn of the rather cartoon ‘baddie’ voices adopted by Redgrave in the recording, the Devil here became a rather charming bloke who sounded a bit like the traditional “Boucher” in the local village.

Another problem that made following the text even more difficult for a (mostly) non-French-speaking audience was the lack in the programme-book of the original stage instructions. Many in the audience were frantically looking at the translation trying to find their way given that Chéreau went straight from character into directions that were not printed. Chéreau is a fine actor though, expressive, animated and with a commanding presence. A pity then that he had read from a script, which gave the feeling of a rehearsal.

Barenboim and the members of his orchestra must take praise for coping in difficult conditions. Tempos were swift, balances spot-on and rhythms beautifully pointed. Only the last ounce of menace and sardonic wit was missing. Guy Braunstein’s expressive violin-playing was the highlight of some very fine instrumental dexterity.