“Stephen Sondheim is one of the greats of musical theatre – legendary for the sharp wit of his lyrics and his darkly distinctive scores for musicals including Sweeney Todd, A Little Night Music, Into the Woods and Company. We celebrate his 85th birthday with a musical trawl through the very best of Sondheim’s back catalogue. Formerly the piano-playing half of cabaret duo Kit and the Widow, Richard Sisson joins Kitty Whately, Siân Phillips and Jamie Parker to bring a touch of Broadway to Cadogan Hall.” [BBC Proms website] 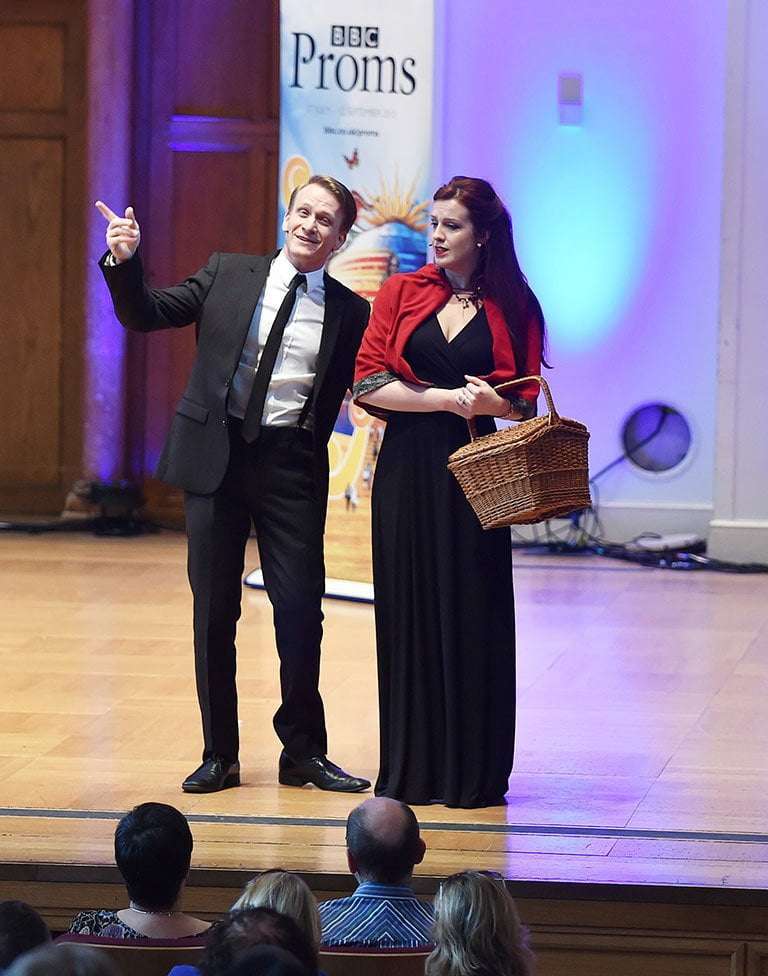 This lunchtime Prom tenuously linked to Stephen Sondheim’s 85th-birthday (which was back in March) was excellent in showcasing the composer and lyricist’s artistry as a song-smith but severely lacking in its execution. Balance between pianist Richard Sisson, who was the curator of the whole, and the three vocalists was a problem for the first fifteen minutes – both in Cadagon Hall and to listeners at home.

BBC Radio 3 New Generation Artist Kitty Whately was practically inaudible in the first song, ‘Everybody Says Don’t’ (from Anyone Can Whistle) – a show beset by setbacks and which closed after only nine performances in 1964, though it did introduce the incredible Angela Lansbury to stage musicals. Jamie Parker, fresh from the late-night Sinatra Prom (No.30), was more at home in these Sondheim songs, chosen more for their acting and spoken content than their melodic lines. In ‘I’m Calm’ (A Funny Thing Happened on the Way to the Forum) Parker, animated and lively, leapt about the stage, bashing the keys of the piano as a petulant child might. No problem with balance here.

’Take me to the World’, from the 1966 made-for-TV musical Evening Primrose, is a duet between poet Charles Snell and maid Ella Harkins. Ella has lived in a department store with other members of a secret group for many years, never having seen the sun. Whately now returned with a hand-held microphone that appeared not to work! Nevertheless she captured the essential simplicity and wonder of a girl who is barely much more than a child and about to see the outside world for the first time in thirteen years; however Whately struggled to be heard in a concert that cried out for a pre-event sound-check, which presumably never happened. 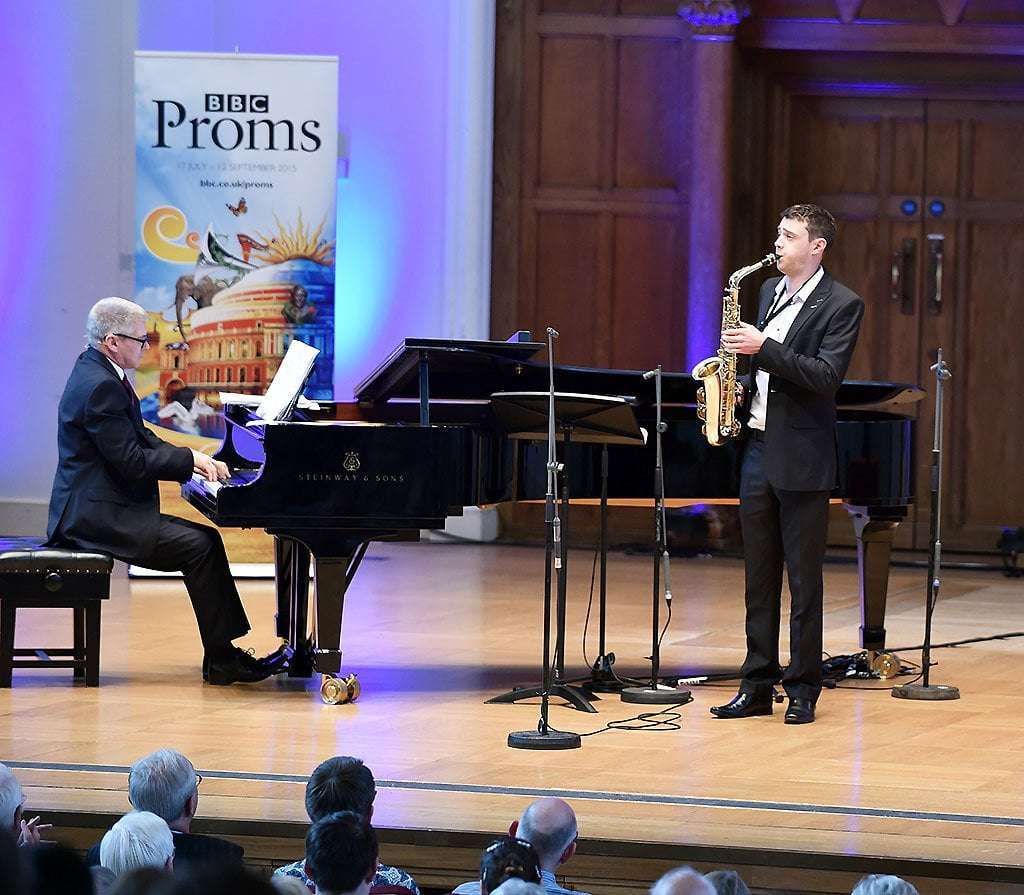 With these vocalists retiring to be wired for amplified sound (however unnecessary such an aid should be in the confines of Cadogan Hall) Anthony Brown played an arrangement by Sisson of one of Sondheim’s best-known songs – ‘Send in the Clowns’ (A Little Night Music). Why such a transcription for saxophone ever needed to be made, while Siân Phillips, who admittedly sang Madame Armfeldt, and not Desiree, in the 1995 London revival, sat in the wings I will never understand. It’s a song for which the words are essential. I felt as if I were attending a school concert rather than a BBC Prom.

Once decked with the neck microphones the balance problems disappeared – it’s rare to report that amplification helped. ‘Fear No More’ (from The Frogs) was the only number with words not by Sondheim (they’re from Shakespeare’s Cymbeline) with music that prompted reminders of the ‘Skye Boat Song’. Derivative, this was not a good choice, even if Whately, Palmer and Brown beautifully performed it with Sisson’s accompaniment.

The second thirty minutes flowed effortlessly from the enchanting ‘Two Many Mornings’ (Follies) where, in this staging at least, the two fall asleep in each other’s arms through a brief commentary from Sisson to ‘Barcelona’ (Company) when Sally and Ben become Robert and April, the latter a slightly dim flight attendant getting ready for Spain. The comedy continued with Sunday in the Park with George – Whately every bit the long-suffering Dot, who models for her lover George Seurat on the Island of La Grande Jatte in Paris. 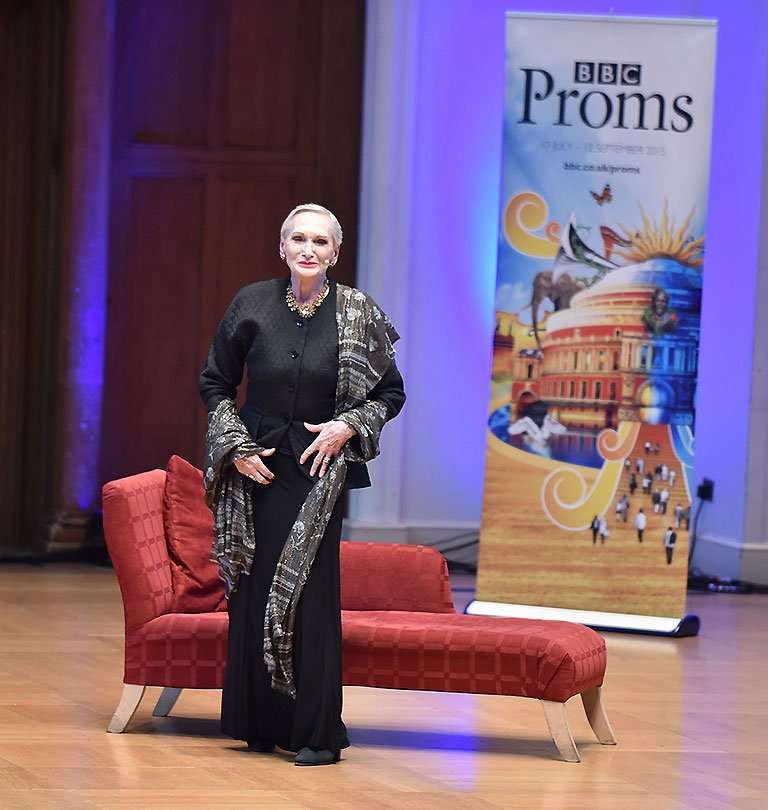 Phillip’s first song revived her role of Madame Armfeldt in ‘Liaisons’ (A Little Night Music). Like Judi Dench who starred beside her as Desiree in the 1995 London revival, Phillips is not a natural singer; however her portrayal of the old woman who reflects upon her chequered past is poignant and gave us the best rendition of the afternoon.

A jaunty but again unnecessary sax arrangement of ‘By the Sea’ (Sweeney Todd) broke the Phillips spell and it was now a race to the finish. ‘Rain on the Roof’ (Follies) boasted choreography by Drew Maconie, which was subtle at best, and absent to most of the audience, though it did include the trio once again. ‘Happiness’ (Passion) gave way to unbridled delight, Whately finding what was missing through most of this Prom, a delicious and passionate account of ‘Losing My Mind’ (Follies).

We ended with the finale that concludes both Acts of Sunday in the Park with George – ‘Sunday’. In the show the whole company is present, so the impression left here was one of ‘understaffing’. As an encore, ‘Goodbye for now’ from Warren Beatty’s 1981 film of Reds brought the Prom to a pleasant close, despite someone’s un-silenced mobile phone. As an afterthought, it occurred to me that the visual theatre of each of the artists would have been completely lost to those listening at home.