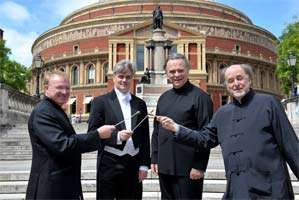 A chinwag of conductors (one imagines some lively chat backstage) – two with the Queen’s sword already on the shoulder and two who are knights-in-waiting – launched BBC Proms 2012, a flag-waving First Night concert with a glance-forward to the Last Night and also bang up to date with a new work, a Proms essential.

Edward Gardner conducted the evening’s premiere, an exhilarating entrée in the form of Mark-Anthony Turnage’s Canon Fever. Puns abound – “cannon fodder” and “cabin fever” – and, in musical terms, canons and “loose canons”. Canon Fever sustains a roulade of notes for its couple of minutes, brass to the fore and unstinting, percussion on (and probably off) the beat and omnipresent, with pairs of bass clarinets and contrabassoons rather submerged (and optional) in their defensive position. No own goals though. 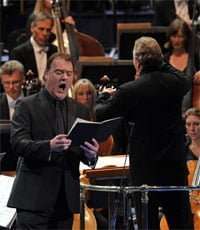 Step forward Roger Norrington for a leisurely stroll through the London that Elgar knew in 1900, a performance nicely tailored to the space of the Royal Albert Hall, well-sprung and expressive. But Norrington’s moderation was at times a drawback. Some sections were lingered over with (understandable) affection, while others needed a bit more oomph and zeal; there were times when this affable and characterful account was threatened by adversary torpor. In the coda, the Hall’s en suite organ swelled with pride and in just balance with the jubilant orchestra.

It was only a few months ago that Mark Elder conducted a magical version of Delius’s Sea Drift (with the London Philharmonic in the Royal Festival Hall). Sea Drift (1906, setting poetry by Walt Whitman) deals with loss and regret, here represented by a pair of love-symbol seagulls; until one is gone, its mate left to reflect on what is no more. Delius’s characteristic languor is present from the off, so evocative as well as darkly beautiful. As previously, Elder paced the work perfectly, alive to the music’s ebb and flow, and detailing it with warmth and clarity, the resigned loneliness of the close here palpably poignant. At its loudest, the full-strength, excellent, BBC Symphony Chorus was easily accommodated in this acoustic; and although Bryn Terfel sang with a wide dynamic range he was also rather plain-toned (colourless) and under-projected and did not erase memories of Roderick Williams’s vivid, honeyed-voice and all-embracing narration that so distinguished Elder’s previous London outing of Delius’s potentially-spellbinding vision. 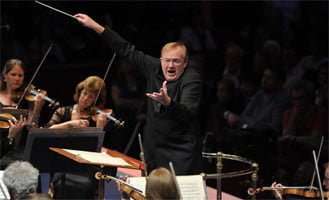 The music of Sir Michael Tippett (1905-98) has rather fallen away from concert promoters’ radars, yet he left us a catalogue of inimitably great music. Even in ‘lighter’ mode, such as this ‘Suite in D’ (1948), written to a BBC commission to welcome the birth of Prince Charles, his musical personality imbues its five movements of folk- and hymn-tunes from the British Isles and France, and even includes a crib from his opera, The Midsummer Marriage, the major work on his desk at the time. Tippett treats his source material with respect and also a twinkle-in-the-eye mischievousness, quixotic touches that could only be by him, as well as a contrapuntal richness and ear-catching intricacy that never submerges the essential simplicity of the borrowed melodies. Martyn Brabbins ensured a heart-tugging lullaby (‘Carol’) and stirring syncopation, exposed writing (trumpet, horn, solo strings) well-taken and meaningfully entwined. (The BBCSO’s forthcoming Barbican Hall season includes much of Tippett’s output, including the four symphonies, and this Proms season also features A Child of Our Time.) 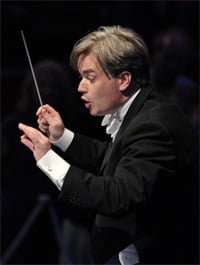 Elgar’s Coronation Ode did sterling service for the crowning celebrations of 1902 (Edward VII) and 1911 (George V), and, in part (posthumously for Elgar), for those of 1937 and 1953. It was a good idea for this Proms presentation to include all the music that Elgar wrote. In 1911 ‘The Queen’ replaced the 1902 ‘Daughter of Ancient Kings’ (at all times A. C. Benson was Elgar’s trusty wordsmith). The work has curiosity value (when Britain was Great, had an Empire, and United in its Kingdom) and certainly Elgar neither dumbed-down nor treated his fellow-citizens as brainless. This is Elgar’s music through and through (sometimes in Crown of India mode), if nowhere near his greatest achievements. Still, welcome some sections with a smile – even the cringe-making, tub-thumping ‘Britain, Ask of Thyself’ (Gerald Finley gave his all here) – and be touched by the intimate sections (some echoing the recently completed The Dream of Gerontius, if not getting close to that masterwork’s spirituality).

Elgar dines out on ‘Land of Hope and Glory’ (first heard coyly on clarinet) and it forms the grand finale. Once a year is enough for this tune. (Stop Press: the Last Night is cancelled!) As for the Ode, it is perhaps now irredeemable (if historically interesting), even in such an excellent and committed performance as this (each vocal soloist reached the ear better than Terfel had done) and Edward Gardner added to his Elgar CV with distinction. It was good to have an ultra-complete Ode, a novel start to this year’s Proms festivities in Kensington, shareable of course with the Whole Wide World!