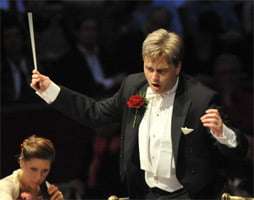 The 117th-Season of BBC Proms has broken box-office records and the Last Night’s opening music paid tribute to the Promenaders. Sir Peter Maxwell Davies (Master of the Queen’s Music) was commissioned by The Musicians Benevolent Fund (in its 90th-year) for a musical “thank you to the Promenaders for their magnificent donations to musical charities over many years.” In the 8-minute Musica benevolens Maxwell Davies sports a style that engages from the first note. The six Fanfare Trumpeters of the Household Division, in resplendent red tunics, joined the brass of the BBC Symphony Orchestra to introduce a broad choral unison: “Benevolent music, colour and symmetry, music and harmony.” The Chorus and some in the Arena (they had rehearsed earlier in the evening) chanted a slow middle section espousing various “musical truths” drawn from Promenaders’ slogans.

Then two Promenaders (Dafydd Price-Jones and Classical Source’s very own Nick Breckenfield) flattered Sir Henry Wood (the founder of the Promenade Concerts) with the time-honoured decorating of his bust with a chaplet of laurel leaves. Edward Gardner then conducted a scintillating account of the Suite that Bartók’s prepared from The Miraculous Mandarin (more or less the first two-thirds of the score). The original ‘pantomime’ (ballet) is a sexual and violent tale that the composer anticipated being censored. The first production in 1926 lasted one performance, and the Suite was born. The buzzing of the BBCSO strings and the snapping, snarling brass portrayed the busy clamour of the city to good effect. Energetic playing by the cellos sent rosin-dust flying as part of a dynamic and exciting reading, not least in the ‘chase’ music with which the Suite ends. 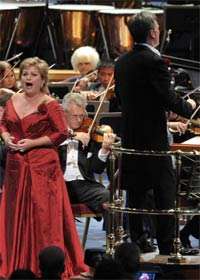 If you only have time (and the stamina) to listen to one of the four music-dramas that make up Wagner’s Ring Cycle, make it Götterdämmerung, which culminates with the ‘Immolation Scene’ as Brünnhilde throws herself on a funeral pyre worthy of a hero and big enough to set alight Valhalla. Part of Wagner’s brilliance in this scene is the way that earlier Leitmotifs all return: music that represents Fire, Gold, The Hero, the Rhine, and the Rhine-Maidens. Susan Bullock has a masterful command of the role of Brünnhilde, and her powerful dramatic voice was more than equal to the BBCSO. This was an engrossing performance. How can you follow that? 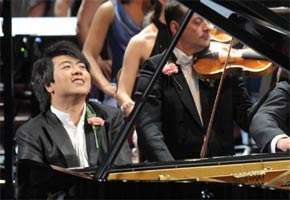 Lang Lang’s appearances either side of the interval gave something of an answer. He gave a convincing if over-loud performance of the Liszt, from bland and character-less to a triumphant conclusion via a triangle-coloured scherzo that was technically brilliant if dull and rhythmically unusual at times. Sadly, Chopin’s Grande polonaise (shorn of its added-later opening Andante spianato) said more about Lang Lang the virtuoso than Chopin the composer. As an encore, a beautiful and dreamy performance of Liszt’s D flat Consolation showed that gems can be found amongst the showman’s output.

Percy Grainger’s simple block-harmonisation of My Dark-haired Maiden was pleasant and well sung by the BBC Symphony Chorus though it isn’t the best this composer has to offer. Benjamin Britten famously wrote to a friend that “I have a small film to write for the Board of Education”. The film was The Young Person’s Guide to the Orchestra, a set of Variations and closing Fugue on a ‘hornpipe’ found in Purcell’s music for Abdelazar. At this Prom the original spoken commentary (by Eric Crozier for Malcolm Sargent) was replaced by Wendy Cope’s new text (the piece can be performed without narration). The main difference in this version is its rhyming verse, which gives a Dr Seuss-like quality that is attractive though unfamiliar. By comparison to the original, Cope’s opening seems over-long, though this was possibly not helped by Jenny Agutter’s narration, which deflected attention away from the music. The poetry that falls in between the solo sections worked well however, although the BBCSO sounded tired and unprepared for the tricky corners that Britten litters his score with. The opening – majestic and stately – was here heavy and lacked subtlety. The wonderful horn section from the first half was no longer at its peak but the percussion made up for the precision lacking in other solos. Reassembling the orchestra In the Fugue was much slicker; it romped home, instrumentalists clinging on for dear life. 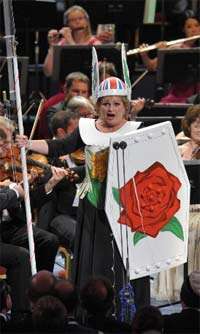 The music of Hollywood movies has made resurgence in recent years at the Proms. John Wilson’s remarkable reconstructions of music used by film studios have been much acclaimed most notably for the music of Richard Rodgers to Oscar Hammerstein’s librettos. Vocalists such as Kim Criswell and Sarah Fox have reignited interest in this music through well-researched and stylistically accurate performances. Sadly the BBCSO is not the John Wilson Orchestra and Susan Bullock, for all her fantastic ability on the operatic stage, is not Sarah Fox. In the first of two Rodgers pieces – ‘Climb ev’ry mountain’ – Bullock seemed to be in a constant battle to overcome a dominating orchestra, and she was also flat and breathy. As for the new arrangement of ‘You’ll never walk alone’, with harmonisation by Stephen Jackson (Director of the BBC Symphony Chorus), as soon as Susan Bullock began to sing so did the audience, which drowned out the subtle harmonies that became more apparent in the second verse when the official chorus joined in. This was a far less triumphant version of a piece that has many meanings (a Liverpool FC flag was waved during the quiet ending). I’d like to hear this arrangement under better conditions.

The traditional ending to the Last Night followed: Elgar and Arne, with Susan Bullock dressed as a mythical heroine (a flashing breast-plate, and party-poppers in her staff), a speech by Edward Gardner (in which he thanked everyone, using three microphones in the process) and Parry’s Jerusalem in the generous orchestration by Elgar. The National Anthem was given in Britten’s hushed treatment for the opening verse. On first hearing it, in 1967, the Queen said that she had never been so affected by this national hymn, “and I’ve heard it once or twice before!” Britten’s arrangement continues to have a similar effect, this Last Night audience, regardless of nationality and colour, singing it with full voice in celebration of a spectacular season of Promenade Concerts.

The audience sing Land of Hope and Glory:

Katherine Jenkins at the Last Night: