Weber
Der Freischütz – Romantic opera in three acts to a libretto by Johann Friedrich Kind after Johann August Apel & Friedrich Laun’s Gespensterbuch [1841 Paris version; translated into French by Émilien Pacini with recitatives by Hector Berlioz and including his orchestration of Weber’s Invitation to the Dance; concert performance] 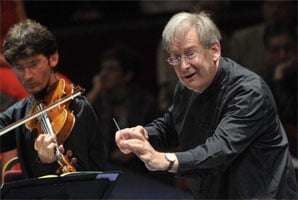 The heralded interventions by Berlioz may have cornered the pre-Prom chatter, but Der Freischütz is still Weber’s show. The original version (1821) helped elevate German Romanticism to the status of high art and inspired a generation of composers, Liszt and Wagner among them, towards a veneration of supernaturally-tinted bygone worlds. The plot is simple: it’s Faust with bullets; yet the ink for Goethe’s Part One was barely dry when the opera first appeared, so it is more an offshoot (no pun intended) from ancient legend than a close relative of the Mephisto tale. In his Memoirs, Hector Berlioz pays homage to Weber’s “masterpiece” and laments its treatment at the hands of the idiotic impresarios who controlled Parisian opera in his day. In presenting the ‘Berlioz version’, Sir John Eliot Gardiner dusts off a curio that the French composer only agreed to undertake for the Opéra de Paris in order to protect a work he loved from being mutilated by lesser hands. It was damage limitation rather than creative inspiration that guided his pen. Berlioz’s technical skill served him well: his recitatives, written to replace the spoken dialogue of the original, are not only faithful to Weber’s idiom but they flow imperceptibly into the arias and tighten the work’s dramatic structure. There is an unexpected residual benefit, too: Der Freischütz sounds great in French. 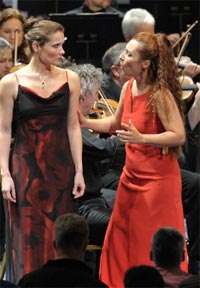 The cast for this 2011 Opéra Comique production (presented at the Royal Albert Hall in concert form, aside for the odd musket and a steaming kettledrum in the Wolf’s Glen) was warm-toned and free from florid histrionics. As always with Gardiner, singers had been selected not for their marquee value but for vocal type, ensemble blend and dramatic effectiveness. Most voices were on the small side, with the ’tache-twirling exception of Gidon Saks as Gaspard, an unspeakable cad who lures our hero Max (Andrew Kennedy) over to the dark side. As for Kennedy himself, he was not afraid to emphasise the weaknesses of the hapless chasseur maudit. With the exception of the vowel-chewing Saks everyone’s French diction was exemplary, even among the non-Gallic cast members, and nowhere more so than amongst the magnificent (and multi-talented) members of the Monteverdi Choir. 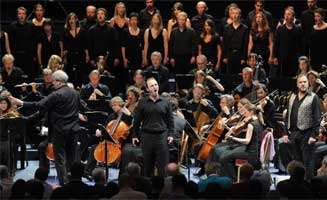 If the Overture began discreetly, that was clearly a dramatic decision on Gardiner’s part as his inconspicuous introduction heightened the impact of Weber’s resounding horns (and the horn-like trumpets of Orchestre Révolutionnaire et Romantique) on their first appearance. The work as a whole was a field day for section leaders as player after player enjoyed an unbuttoned moment; and we now know why Berlioz took it upon himself to orchestrate Weber’s piano piece Invitation to the Dance, for although he slotted this interlude into Act Three with the utmost reluctance (in order to meet the Opéra’s demand for a ballet) his sure taste and musical judgement allowed it to fit seamlessly into the drama. I am not sure why Gardiner replaced this divertissement’s solo cello with massed ranks of them, but as a reading it was certainly light on its pins. Indeed, throughout the opera his brisk tempos were of a piece with Weber’s lyrical momentum and with the lean, economical libretto that rattles through its tale with brio and conviction – so that our disbelief is all but suspended until the preposterous dénouement.

What spatial fun the Monteverdi choristers had in Act Two as the entire auditorium became the Wolf Glen. They were the animals of the forest, murmuring and screeching while the kettledrum came to the boil and Christian Pelissier’s spoken (and amplified) Samiel cast his satanic spell. Murmurs of a more affirmative nature filled the hall when Sophie Kärthauser (as Agathe, our not-quite-doomed heroine) so exquisitely delivered her two set pieces, the Act Two ‘Prayer’ and the Act Three ‘Cavatina’; collective excitement was palpable as several thousand of people simultaneously discovered an enchanting talent. Virginie Pochon was similarly radiant as Annette, Agathe’s characterful confidante, but it was the heartfelt conviction and vulnerability of Kärthauser, dew-voiced and intense, who stole our hearts and the evening.