“After the success of last year’s Ten Pieces Prom comes a new selection of classical essentials, this time aimed at secondary-school pupils. In the culmination of the Ten Pieces II project – which has taken classical music to schools across the UK – this Prom combines live performance with video animations. From the power of Wagner’s ‘Ride of the Valkyries’ to the skills of DJ Mr Switch in Gabriel Prokofiev’s Concerto for Turntables and Orchestra, the Ten Pieces II Prom also showcases creative responses from teenagers.” [BBC Proms website] 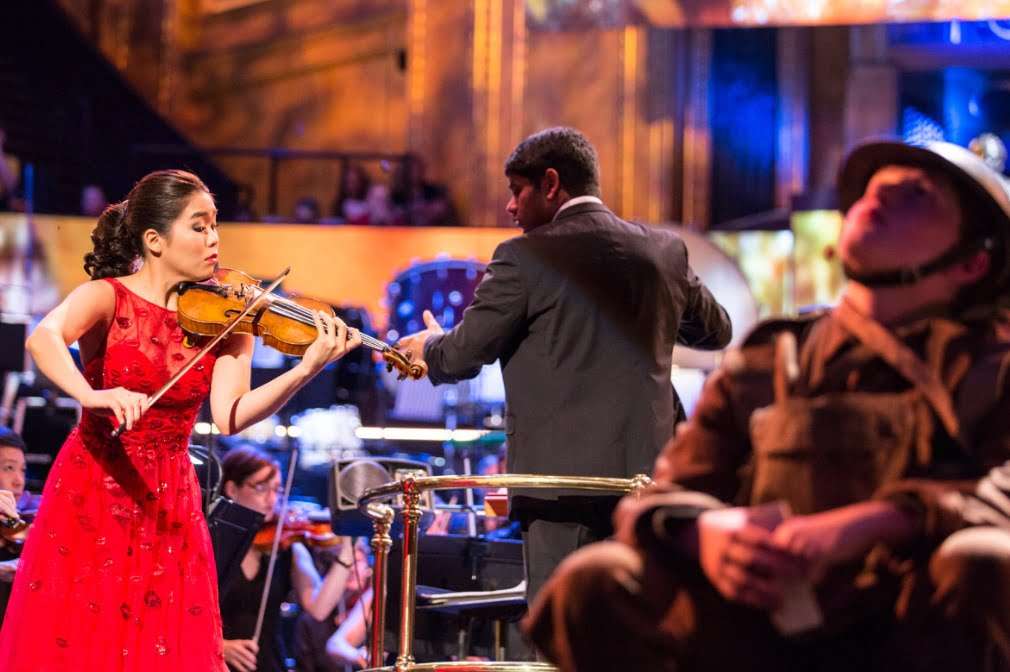 Building on last year’s Ten Pieces, which engaged the UK’s primary schools, the BBC last October extended the initiative to secondary schools introducing ten additional pieces as catalysts for the young people to produce dance, animation, digital art and compositions. Most of the original examples have the common factors of colour, punchy rhythms and abrupt changes of pace.

The full resources of the Royal Albert Hall were used. Screens showed how children responded, lighting was used to create mood and atmosphere, spots picked out individuals in the audience, and there was considerable panto-like interplay between presenters, performers and the audience. Joseph Haydn (Dan Starkey) might have inadvertently composed the Match of the Day theme-tune and bantered with ex-footballer Dion Dublin who launched a football into the Arena. Newsround reporter Leah Boleto was frenziedly following sightings of Valkyries across the London skyline and the unflappable Naomi Wilkinson and Lemn Sissay smoothly linked proceedings.

The concert opened with J. S. Bach’s D-minor Toccata and Fugue played by Wayne Marshall as a imperious call to order on the magnificent RAH organ. The first appearance by the BBC Philharmonic and Alpesh Chauhan was the second movement of Shostakovich’s Tenth Symphony accompanied by dance from the girls of Wildern School, Southampton, working with Denni Sayers. This short, violent Scherzo, a representation of the oppressive power of the Stalinist, found fourteen dancers closely synchronised with affecting flourishes rising out of physical claustrophobia of the group, flame-licked by effective lighting. 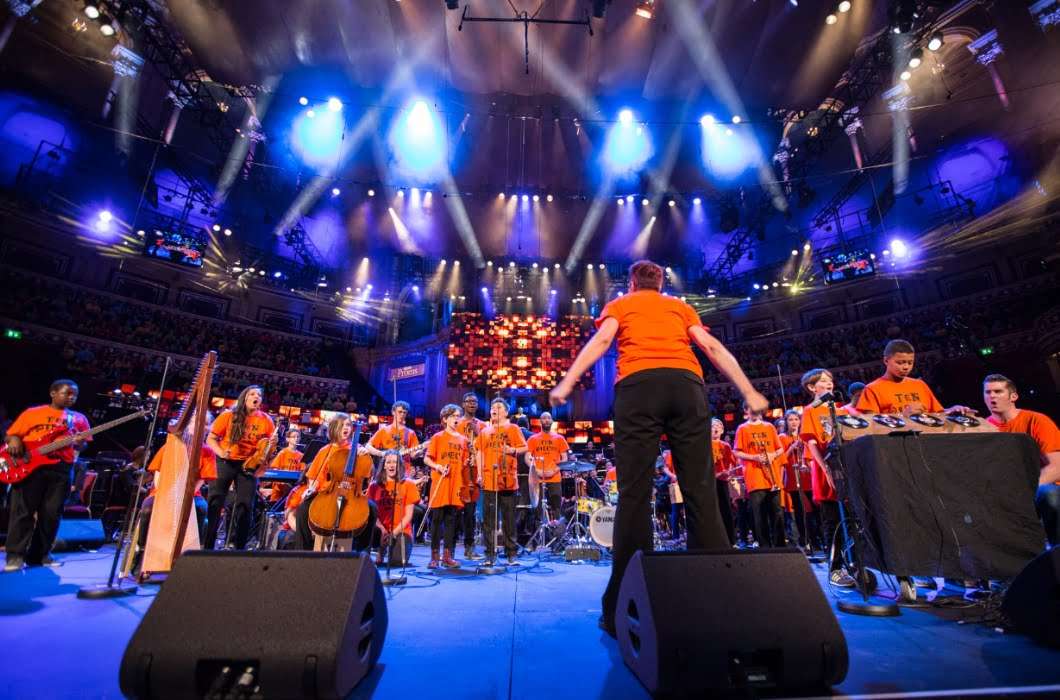 The Qureshi siblings Yasmine (flute) and Michael (piano), with two BBC Philharmonic flautists, performed their Fluto no Uto, given an orchestral arrangement by Gareth Glyn. It’s a fluent creation. Then pupils from Greater Manchester schools joined the BBC Philharmonic in the ‘Habanera’ from Bizet’s Carmen.

Matilda Lloyd demonstrated her dexterity and élan in the Finale of Haydn’s Trumpet Concerto and the first half closed with the 400-strong Ten Pieces Choir sections from Verdi’s Requiem providing sheer physical thrill.

After the interval, the Able Orchestra, which enables young people to create and perform music on equal terms, regardless of physical agility or musical experience. They used technology to create sounds and images based on Gabriel Prokofiev’s Concerto for Turntables and Orchestra. Some imagery had hypnotic beauty. The Animate Orchestra from Trinity Laban, London, produced an instrumental response to Prokofiev with propulsive rhythms and vibrant enthusiasm. When the fifth movement of the Prokofiev was itself played, with DJ Mr Switch on turntables, one admired its gritty timbres but it was too long for its material. 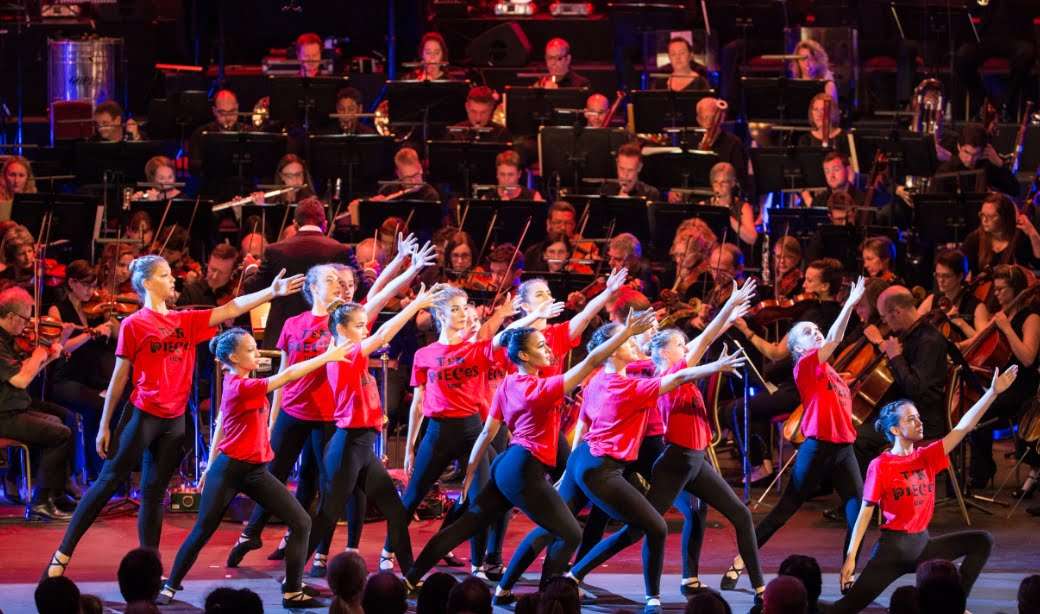 Esther Yoo was the violinist in Vaughan Williams’s The Lark Ascending, which provided repose. It was poignantly introduced by three boys from Bangor Grammar School in military uniform reading imagined letters from the Front in the First World War. Yoo’s freshness of approach, soaring line and radiant phrasing made The Lark new-minted, even if it was truncated to half its length!

The changing moods of Anna Clyne’s Night Ferry were clearly delineated by Chauhan and the BBC Philharmonic, with more than a hint of Stravinsky. Then the long-heralded arrival of the Valkyries, eight dark-clad dancers made their way into the Arena gradually forming into a golden ring, as Chauhan and the orchestra stoked up an all-engulfing Ride. Finally, ‘Mambo’ from Leonard Bernstein’s West Side Story, the audience on its feet singing, the presenters dancing and Haydn showing his prowess on maracas. It had been an enjoyable, inspiring and often-moving (morning) occasion.