Fiddler on the Roof
Music by Jerry Bock, lyrics by Sheldon Harnick, and book by Joseph Stein based on the Yiddish short stories of Sholem Aleichem 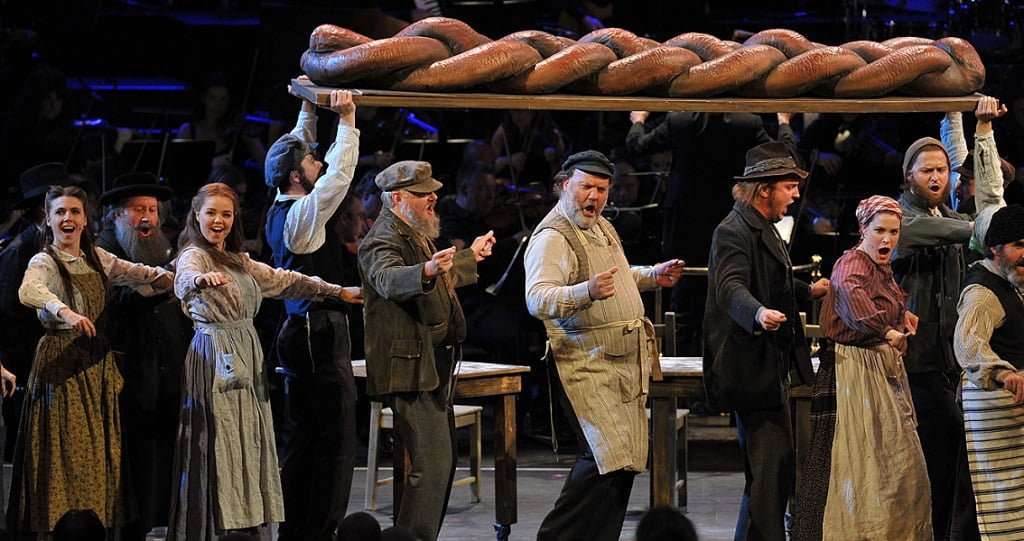 Direct from Grange Park Opera, tickets for this Fiddler on the Roof Prom had been sold out for a while – little surprise. Add to this a new and authorised publication by David Charles Abell and Sean Alderking – based upon the 2004 Broadway version and original-orchestrator Don Walker’s score – and the liquid tones of Bryn Terfel, this was a presentation that offered high expectations. On the whole, it did not disappoint.

Fiddler on the Roof contains a cornucopia of hits – ‘Matchmaker, Matchmaker’, ‘If I were a Rich Man’ and ‘Sunrise, Sunset’ – but belies a more complex socio-political message with which Judaeo-Russian American families, many of whom would have been in the audience at the first performance in September 1964 (with Zero Mostel, later Topol), could easily empathise. It set the record at the time for the longest-running musical with 3,242 performances. 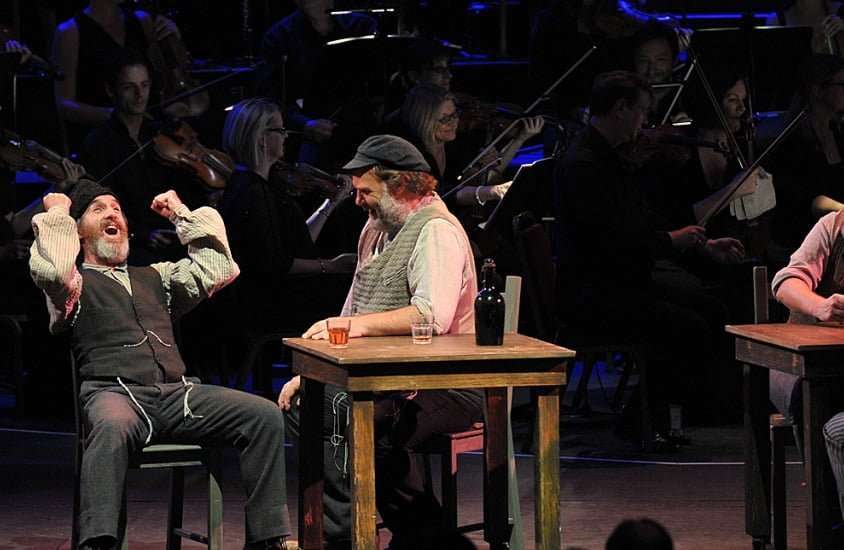 It is the story of philosophical dairyman, Tevye, living a precarious life in the fictional pre-revolutionary Russian shtetl of Anatevka. He is poor, has five daughters and a steadfast desire to cling on to Jewish traditions – a tricky balancing act in early-twentieth-century Tsarist Russia especially as his offspring have different ideas.

At Grange Park the production was without amplification; however in the cavernous Royal Albert Hall we were not treated to such intimacy. The singers were boosted from above and in front of the stage. While balance was fairly natural, the sound tended to echo and with a voice as capable of filling the Hall as Terfel’s, the tendency to hear the sound twice – directly from the singer and then from the speakers – was unpleasant.

The eponymous fiddler, here Houcheng Kian, adds cohesion to the musical; apart from the two final unison notes (ruined here by over-excited applauders) he opens and closes the show. Peter Relton (taking over from Grange Park’s Antony McDonald) and designer Gabrelle Dalton have done a fine job. Their simple set (Tevye’s cart and a few desks and chairs, and beautiful costumes) and largely monochrome costumes add credibility to the Spartan existence of the protagonists, kept alive by virtue of family and tradition. 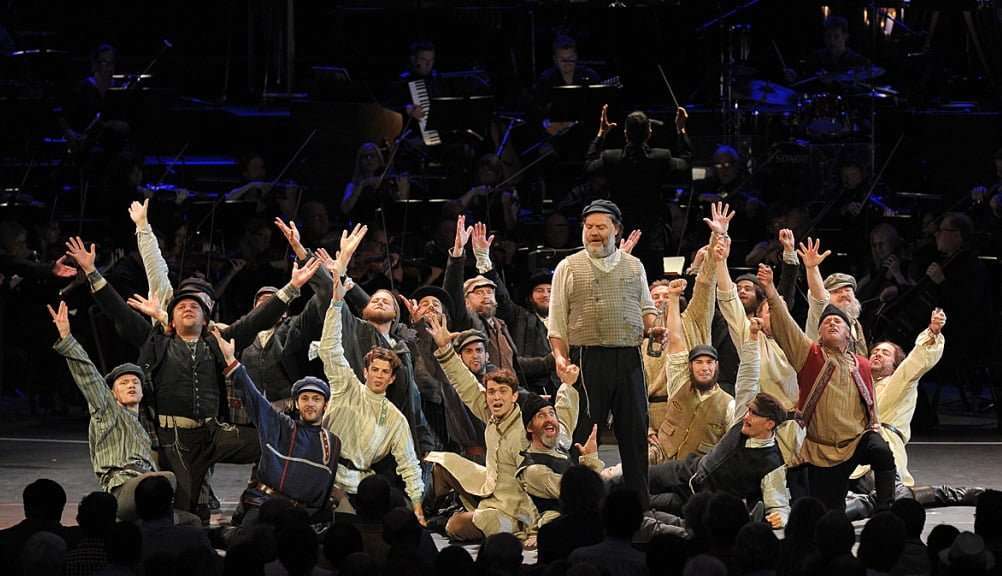 While Fiddler on the Roof is considered to have moved in a new direction from the dominant style of Rodgers & Hammerstein, it retains some characteristics including dance episodes. Grange Park employs excellent, but unnamed in the programme, dancers who brought to life in a Cossack-style the episode at the end of ‘To Life’. Similar excellence was evident during the wedding celebrations in ‘The Bottle Dance’.

Singing was generally excellent. Of note the second-Act duet between Perchik and Hodel ‘Now I have everything’ was especially attractive – Katie Hall’s light bell-like tone sat well next to Jordan Simon Pollard’s tenor. Hall has a particularly recognisable musical-theatre voice and is possibly better known for her portrayal of Cosette in Tom Hooper’s film Les Miserables.

Many of the better-known tunes appear in the first Act, often leading the second to drag – not so here. Rebecca Wheatley’s portrayal of Yente, the Matchmaker, completely combined comedy with pathos in ‘Topsy Turvy’ – written for the 2004 revival – lamenting how modern couples now marry for love, asking “what kind of match is that?”. Tevye and Golde’s duet ‘Do You Love Me?’ was also commendable though here the mismatch between Terfel’s trained voice and Janet Fullerlove’s was more noticeable.

The BBC Concert Orchestra was ever-sympathetic to Abell – the extra instruments welcome. As Abell says, “two of the particular sounds for this show are the mandolin and accordion. They were played in Klezmer music, which very much influenced our orchestration.”

Lasting over three hours (with a 20-minute interval) there is a tendency for Fiddler to drag, more to do with the show itself than this performance, which was slick almost to the point of incomprehensibility (Tevye’s dream-sequence most notably). The second half is very dark in comparison to the first – at the end of Aleichem’s stories Tevye is alone, his wife dead and his daughters dispersed – so, in Fiddler, the family emigrating to America is more hopeful though far from a happy ending. Grange Park’s blend of comedy and poignancy brought the audience to its feet. Mazel tov!