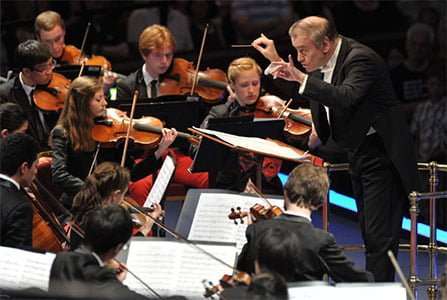 Sporting blazers, red trousers and spotty sneakers, the National Youth Orchestra of the United States of America (newly formed and partly an initiative of Carnegie Hall) made this appearance at BBC Proms with an appealing and weighty programme reflecting the enthusiasms of Valery Gergiev, who marshalled the sizeable ensemble with his trademark tooth-pick. Even Nevada-born Sean Shepherd’s Magiya reflected the programme’s Russian concerns, leaving the eventual Gershwin encore as the only item to match the Americana of the orchestra’s attire.

Sean Shepherd, born in 1979, provided Magiya, a seven-minute opener that draws on the tradition of magic in Russian music and art. Shepherd was honest about the models for his bustling scherzo – Rimsky Korsakov, Stravinsky and Glinka were all there, though not at the expense of a certain individuality. Magiya demands virtuosity without ever becoming subservient to it and samples frequently the oriental-sounding pentatonic scale. It escalates rather than develops, but it is an effective homage to the spirit of the fantastical in Russian music and was given a confident and colourful performance. 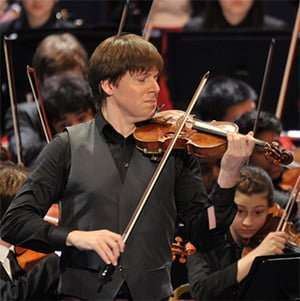 Somehow Joshua Bell seemed just the right soloist to join this all-American orchestra and his performance of Tchaikovsky recalled, in part, the opulent Hollywood style of a generation of great violinists who made the US their homes. His first entry demonstrated his lean but warm tone and penchant for super-smooth portamento; too sweet for some, perhaps, but effortless and winning. There was more of the same to enjoy in the cadenza, though Bell tended to pull it around excessively. He clearly enjoyed interacting with the orchestra, but his intentions didn’t always square up with Gergiev’s. The conductor favoured a very broad view of the tuttis, often seeming a step slower than Bell’s tempos and the not always responsive when accompanying. Whether this tension contributed to Bell’s occasional scruffiness is unknown, but the violinist seemed more at ease when given free rein. The encore was rather special, however: the ‘Mélodie’ (in an orchestral version) from Tchaikovsky’s set of three pieces Souvenir d’un lieu cher, giving us another slice of Bell’s lovely legato playing.

The real meat of the programme was Shostakovich’s Tenth Symphony, played for all its dramatic and impudent worth by Gergiev and his young charges. To talk about meaning in the context of Shostakovich’s music is a minefield, but Gergiev seems sure about the straightforward expressive intensity of the symphonies, casting this one as a tormented journey from persecution to triumphant self-validation. The Tenth has picked up a great deal of baggage over the decades, partly because of its date of composition (1953 – the year of Stalin’s death) and because of the frenzied use of the composer’s own signature-code – DSCH (D, E flat, C, B in German notation). Gergiev’s view was forcefully given and perhaps, as a result, missed some nuance and brilliance. 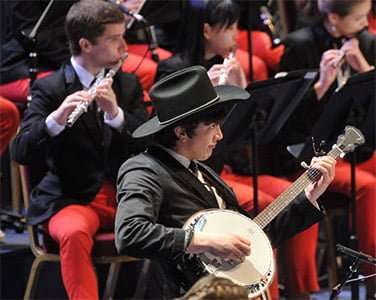 There’s something very special, though, in being present at a performance given with such confidence by young musicians, many of whom were probably encountering this music for the first time. It was certainly enough to forgive any tentative or untidy playing, but certain moments, such as the hushed recollection of the opening movement that follows the horn’s first interruption of the Allegretto, were so effective that the players needed no allowances made.

To finish, Gergiev strayed into the orchestra’s home territory, conducting a very condensed version of Robert Russell Bennett’s Symphonic Suite from the Gershwins’ Porgy and Bess and in the process introduced a banjo. Next year’s formation of the NYO/USA will be conducted by David Robertson.