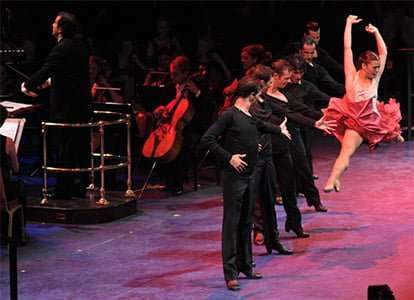 Dance is one of this year’s Proms themes and this programme featured music with connotations of it or written directly for it, with full choreography in the second half. The world premiere of John McCabe’s Joybox, dedicated to the memory of the recently deceased Steve Martland, was the single exception. The unlikely impetus for its creation came from the composer’s experience at an amusement arcade in Japan with the various overlapping but autonomous musical jingles of the machines creating a jungle of sound. Such a template might suggest a link with another aspect of this year’s Proms – the music of Witold Lutosławski, with its controlled aleatorism – but the 6-minute Joybox is more measured and integrated in texture than comparison with Lutosławski or the arcade would imply. It begins with a quiet, moderately fast percussive rhythm – rather as Ravel’s Boléro generates its structure and momentum – the underlying pulse maintained by brass and woodwinds alternately, but unlike the Ravel Joybox comes to a quiet end with a return to the percussive taps. 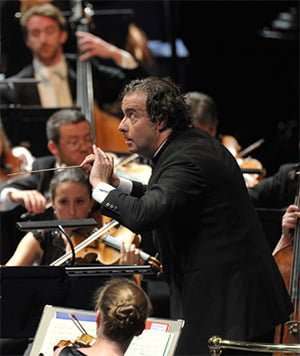 Juanjo Mena’s conducting of Beethoven’s Symphony No.7 was disappointing and ultimately tedious – programming this work in the first half of a concert might itself be treated with suspicion. None of the movements were taken particularly swiftly or energetically, save for the over-fast finale, which is not necessarily a problem, but the pace of the opening flourish of each was quickly dissipated and failed to work up to very much. Even the transition from the slow introduction into the Vivace was far too relaxed and comfortable. It did not help that some in the audience insisted on clapping between movements, just as they did after several sections of The Three-Cornered-Hat, and thereby breaking flow and connection. The tread of the second-movement Allegretto had no sense of going anywhere, and by simply allowing the music to become louder (brass was over-prominent throughout) and denser, no sense of drama or urgency was fashioned, not even during the contrasting major-key section. In the finale Mena could not create a thrilling conclusion just by adding more volume and speed in the coda; this movement works best by maintaining a constant tempo and through building power and momentum from within the music itself as the tension grows over the grinding pedal in the lower strings, but Mena’s approach was too casual to achieve this (despite his lunging conducting style). If Wagner had heard this performance, I cannot believe he would have described the Symphony as “the apotheosis of the dance”. 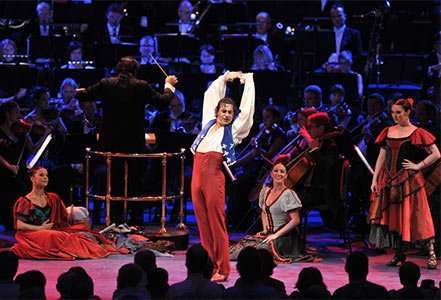 For Falla’s The Three-Cornered Hat and Ravel’s Boléro the Antonio Márquez Company provided choreography devised by Márquez himself. He also took the central part of the Miller in the former work. He, his wife and the peasants were attired in traditional Spanish costume, while the Magistrate and his entourage were in more-formal 18th-century dress. This, and the pantomimic gestures of the action, resembled somewhat the traditions of commedia dell’arte, and the routine was jolly and agile, if a little simplistic. Spanish dances were energetically enacted by most of the troupe, except for the Magistrate and his crew. He was played as a comically inept figure, rather than sinisterly lecherous – a Don Pasquale, not a Scarpia. Unfortunately the Royal Albert Hall is a far from ideal venue for dance since the particular way in which reverberation works in its space meant that the stamping, tapping and shuffling echoes against the Gallery like a continual stream of pounding gunfire. This was less bad in the Falla where the dancing at least bore correlation to the music’s rhythms, but in Boléro there was no connection between the dancers’ clumps and the rhythmic articulation of the melody. This made a very jarring impression.

Mena (who verbally remembered those lost in the dreadful train crash at Santiago de Compostela) was a more natural conductor in Falla’s ballet (given complete), drawing some lustrous string sonorities and a drowsy rubato at appropriate moments. There was also a musical distinction between the ludicrous character of the Magistrate and the heroic, impassioned tone of the music associated with the Miller and his wife. Clara Mouriz conveyed a mood of some mystery, as though calling from afar in her vocal contributions. But the BBC Philharmonic did not create that darker quality which runs underneath the music, as often in the Spanish temperament, despite its overt vigour and brilliance. In Boléro, Mena did not overcome his problem of securing an accrual of momentum across the appearances of the melody, the music becoming a mechanical, numbing succession of repetitions rather than a musically-coherent build-up to a climax of devastating finality. The trombonist’s entry sounded rather woozy and the prominent position of the drummer and trumpeter gave the iterated bolero rhythm a threatening, militaristic character akin to the second movement of Vaughan Williams’s Symphony No.6.

Purporting to act as an encore, some of the full-orchestra strains of Boléro were played again while the dancers rampaged across the stage once more and the audience clapped rhythmically, as though this were entertainment on a low-grade cruise boat or in a circus. For different reasons this Prom may well prove to be one of the most memorable of the 2013 season. Certainly it provided flair and colour, but sadly the experience had precious little to do with thoughtful music-making.