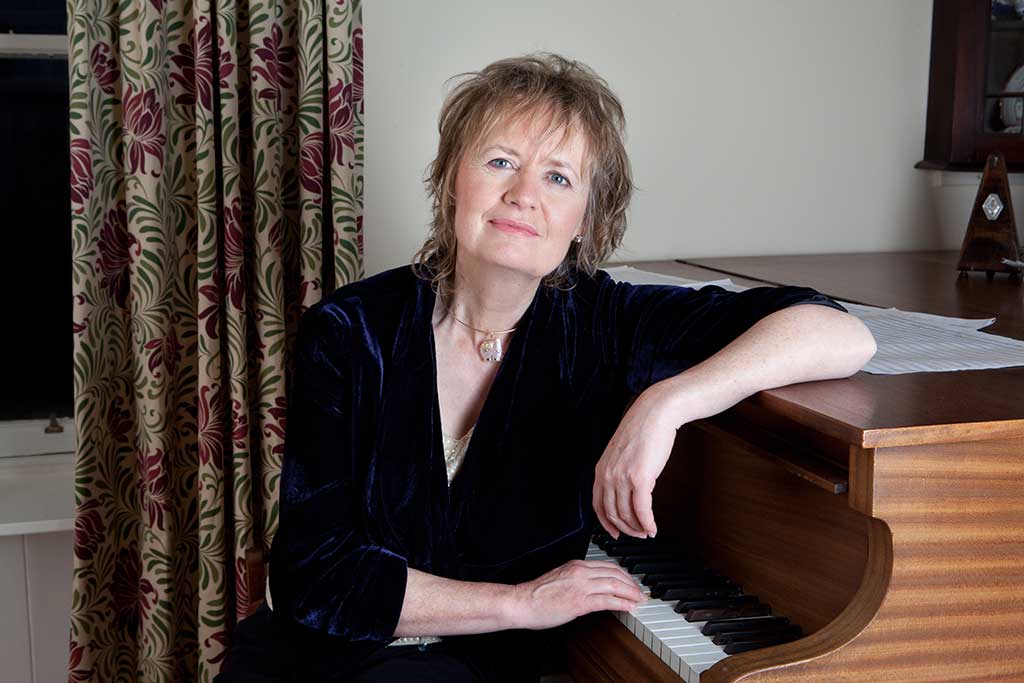 Sally Beamish is a very successful composer. Despite experiencing what might have been the somewhat off-putting interviewing style by the fast-talking Andrew McGregor, she emerged as a pleasant, outgoing personality, well able to talk about her music in a direct, clear, almost objective fashion. Born in London in 1956, she became a professional viola player, and then moved to Scotland in 1990 in order to devote more time to composition: she told us that she had not played her instrument for fifteen years, such has been the demands on her as a composer, and that most of her work is as a result of commissions. Her Scottish environment and the country’s cultural traditions have greatly influenced her creativity, and even the opening work, Prelude and Canon, for two violins, had a Scottish flavour, despite its classical form. Voices in Silence, for solo piano, was written in response to a published collection of First World War poetry bearing the same name, and reflects Beamish’s general preoccupation, as a Quaker, with the horrors of war. From this we heard the opening piece, ‘Dawn’. Her Second String Quartet, however, reflects the experience of a visit to California, the first-movement ‘Boardwalk’ having plenty of brio and lively, jazzy rhythms. Finally Beamish’s Quaker influence was reflected in Epilogue, a quiet, reflective piece for string quintet that evokes the mood of a meeting’s final prayers. All these pieces were played brilliantly by the students and the music was very approachable, if not particularly individual or memorable. 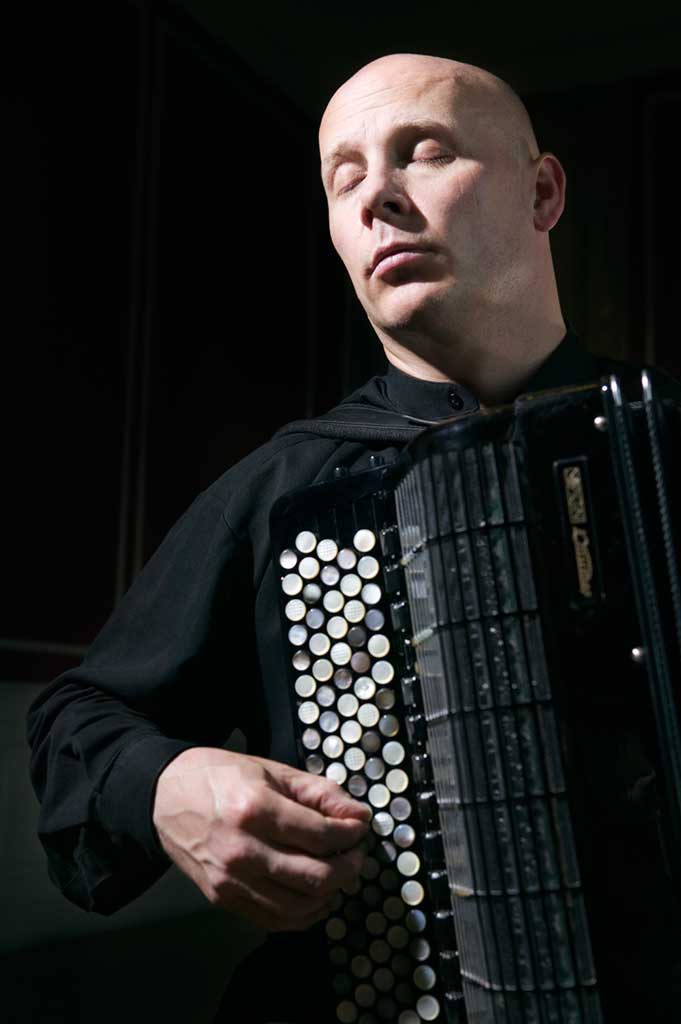 And so to the main event of the evening, which began with a rare performance of an orchestral piece by the tragic Ivor Gurney (1890-1937), who as a soldier survived the First World War, if shell-shocked, but three years later was certified as insane and incarcerated for the rest of his short life. The (here) 13-minute War Elegy was completed in 1920, having been originally conceived as a funeral march. It is a well-crafted work, with something of an echo of Elgar’s style, dedicated to those who died in World War One, and was well worth hearing.

Then it was back to Sally Beamish. Her Violin Concerto was the work scheduled for its London premiere: unfortunately the soloist Anthony Marwood had been taken ill, but providentially the accordionist James Crabb and Martyn Brabbins had prepared Beamish’s 2006 work The Singing for an imminent release on the BIS label (though with a different orchestra) and were able to present it as a substitute. This three-movement concerto had been inspired by Crabb’s playing, and its title referred to the songs, blessings and prayer that infused every aspect of life in the Scottish Highlands during the nineteenth-century at a time of depopulation. There was much to admire in Crabb’s virtuosity and musicianship, but apart from the unusual timbre of accordion balanced against an orchestra the work’s content is thin and derivative. As an encore Crabb gave a elegant rendition of Rameau’s The Conversation of the Muses, a harpsichord piece from 1724, which he played direct from the manuscript. 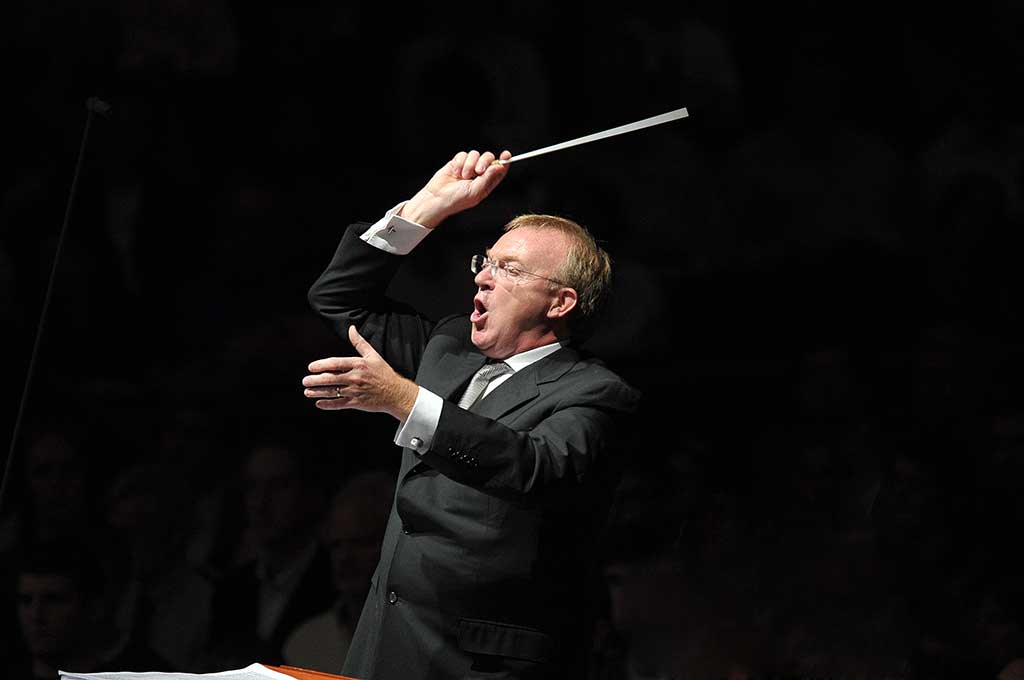 After the interval William Walton’s First Symphony was given a magnificent performance. The playing of the BBC Symphony Orchestra was confident and brilliant throughout and Brabbins showed complete mastery of the score. Every aspect of the reading was just right – the first movement driven very hard, then the snarling, ‘malicious’ elements of the succeeding Presto were vividly brought to life, followed by a bitter-tasting, regretful Andante and then ultimate resolution in a highly-charged account of the finale. Further evidence of Brabbins’s excellence.

What a pity that applause broke out after each of the first three movements. In this work particularly tension should remain electric throughout all four movements, and across their divides, until after the closing triumph: here it became repeatedly dissipated by premature clapping. No doubt there are those who regard traditional between-movement silence as stuffy, but many others feel that this problem has now become one that needs attention by concert promoters. Black marks, too, for the RAH attendant who failed to stop the use of mobiles (despite requests to switch them off made over the public-address system) before this aberration was brought to her attention, and also to the programme-editor for allowing a listing of six early-September Prom concerts to be set out under the heading: “Your guide to concerts and broadcasts in the next few days.”