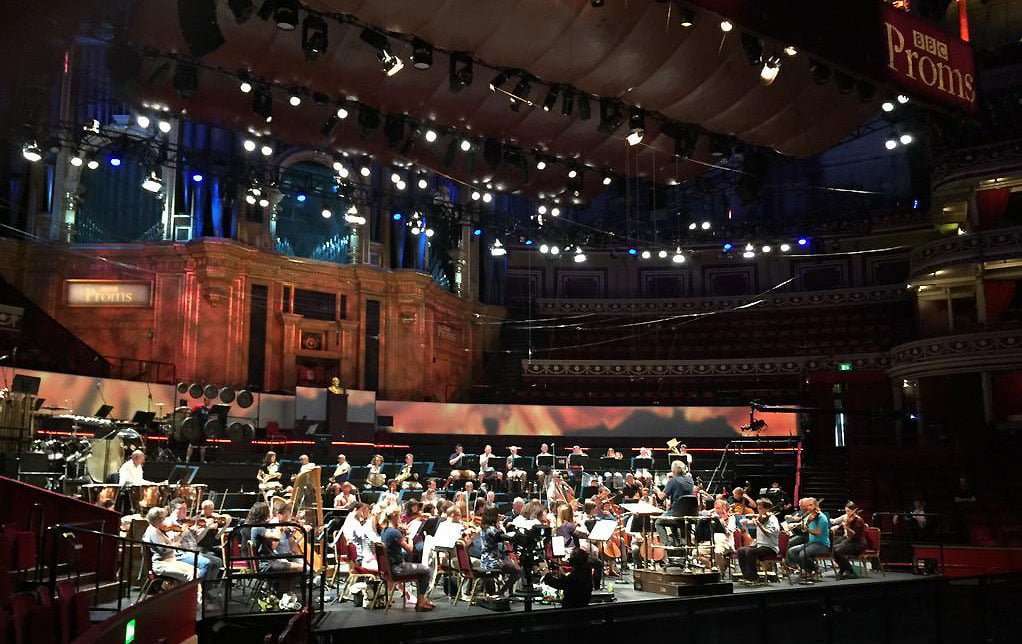 James MacMillan’s latest Symphony, completed this year, is dedicated to Donald Runnicles. Sir James’s No.4 plays continuously for close on forty minutes, is scored for a full if not extravagant orchestra – including harp, piano, celesta and enough percussion (including timpani) for four players – and has ritual in different manifestations as its inspiration as well as the “embedding” into the score of choral music by Robert Carver (c.1485-c.1570), a centuries-ago Scottish predecessor of MacMillan’s that he much admires.

A first hearing of something complex doesn’t necessarily give the listener the full story, and I am keen to hear the work again – a positive sign of course – not least to solve the structure of it. Certainly MacMillan’s orchestration consistently attracts the ear, chiming mysteriously at the very beginning. Sinuous melody plays a big part in the work, often surrounded in decoration – this is music ancient and modern, something acknowledged by the conductor in an interview but penned by your correspondent before reading that!

Overall MacMillan 4 is often feverishly active and contrasted with intense long-note threnody – music of anxiety and consolation, with some of the writing for strings first reminding of Vaughan Williams’s Tallis Fantasia (a piece that similarly crossovers between way-apart eras) and Tippett’s Concerto for Double String Orchestra, both unfailing masterpieces, and with solo spots for viola(s) and cello.

In Symphony 4 there are no lack of reminders that MacMillan is the composer of The Confession of Isobel Gowdie, but such eruptions and retrospectives, while offering a volatile cocktail of emotions also seem to compromise flow and therefore a symphonic discourse. That’s a first impression, but certainly about halfway through such devices became palling – and, anyway, had we reached any particular stage in the journey? I wrote “patchwork” down.

At times the music seems self-consciously romantic, but the piece rallied and took me with it, such as with a trombone meditation that Bruckner would have put his name to, then some Britten-like trumpet fanfares and an unleashing of gongs and bells – all of which are part of MacMillan’s arresting use of the orchestra. Eloquent and aggressive invention, yes, and a setting up of forceful turmoil, yes, yet in terms of design it may be that MacMillan could have said as much in a shorter playing time, but there is in fact a sense of direction and resolution in the final ten minutes or so that is convincing. The above named composers are but references.

If there is an initial doubt as to this piece wholly living up to its hallowed title, it’s certainly going to be intriguing to re-visit it, but there are no doubts about this first performance being superb, the BBCSSO giving its all and with Runnicles totally commanding in his conducting. The composer seemed bowled over.

As he was in the Mahler, a Symphony with a testing beginning for the principal trumpet. Runnicles left Mark O’Keeffe to it, and he shone if forlornly taking us into the funereal measures of the first movement, which also railed indivisibly and had its militaristic aspects highlighted. To emphasise that the five movements are divided into three parts, Runnicles went straight into the stormy second and dug deep into its content, not least for the ultra-pianissimo cello recitation, beautifully played – so an ideal moment for a plonker in the audience to share with us that his/her mobile-phone remained on and that it had just received a text! This movement carries an explosive charge, a struggle, and typical of Runnicles’s wholeness of vision was that the brass chorale – to be celebratory at the Symphony’s close – came and went as a promise yet to be delivered.

Runnicles doesn’t sensationalise or go for cheap effects, and nothing was given away easily, nor were Mahler’s later emendations (usually made for specific circumstances) given employment, thankfully, such as the principal horn playing from the front of the stage in the Scherzo, which Mahler is quoted as saying “is the very devil of a movement … Conductors will all take it too fast and make nonsense of it…”. Not Runnicles, who found lilt and suavity while maintaining suspense, so that the flare-ups really meant something, and during which the horns, led by Richard Watkins, were especially impressive, as was he alone. In the rampaging coda, Runnicles, animated and authoritative throughout the performance, had both feet off the podium a couple of times.

The Symphony’s final part begins with the Adagietto, for strings and harp, a love-letter from Mahler to Alma. We know that Mahler’s disciples, such as Mengelberg and Bruno Walter, took a self-effacing approach to this intimate music, their recordings being around the seven-minute mark. Readings of it have become broader, although no-one matches Scherchen’s sixteen (Philadelphia), save that Kent Nagano with the LSO once came close. Runnicles took a spacious view but never inflated the music and was flexible with it for ten played lovingly, rapt and poetic, minutes. A solo horn breaks the spell to introduce the finale, full of baroque devices that feed the joy and wit this movement abounds in, given here with grace and favour. Runnicles waved the carnival band in with delight and the exuberant coda flew to as emphatic a final chord as you could want.

This was an account of a much-played Symphony that reached the parts many others have not, for as well as scrupulous attention to detail and dynamics there was a total feeling of rightness, that everything was related and belonged, and was made inevitable. Such musicianship reminded of the great Rafael Kubelík.

This MacMillan 4/Mahler 5 match – the latter edging things without going into extra time – was another resounding success at the Proms for Donald Runnicles and the BBC Scottish Symphony Orchestra. Let there be many more.