“Mary Anne Hobbs of BBC Radio 6 Music presents an evening exploring the borderlands of classical music, with the pioneers of a new generation of musicians who draw on contemporary electronic influences. Piano and keyboard virtuoso Nils Frahm makes his Proms debut, as does atmospheric duo A Winged Victory for the Sullen, and together they create an exclusive centrepiece collaboration.” [BBC Proms website] 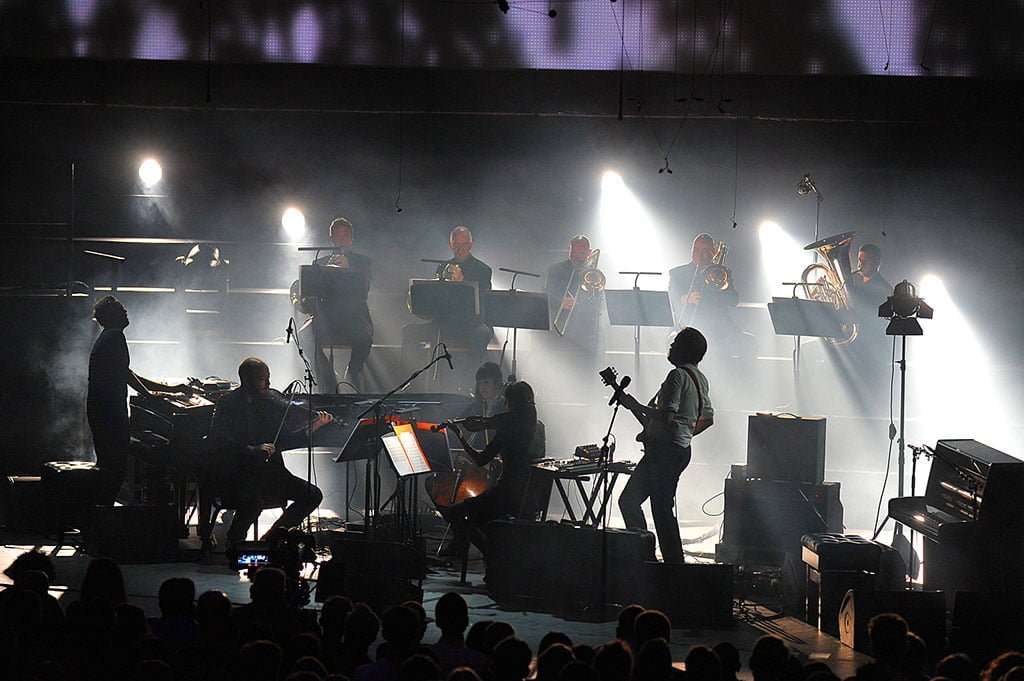 This was the second Prom to be held under the auspices of BBC Radio 6 Music, and while the first in 2013 was essentially a showcase for the station and its diversity of popular music, from The Stranglers to Laura Marling, this late-night promised an affair “re-imagining a future for music with classical roots.”

A week ago at the Proms Pete Tong presided over a seething mass of bodies in celebration of BBC Radio 1 and its Ibiza residency, the 6 Music DJ Mary Anne Hobbs set the scene for a very different scenario, music where next to no movement was required. The simple but effective concept saw a forty-minute set from American duo A Winged Victory for the Sullen, passing over to German composer-pianist Nils Frahm. With the DJ very much a taste-maker in modern music, Hobbs it was who had introduced both acts to the 6 Music audience and, bowled over by the positive global response, set about creating this late-night Prom.

Both artists record for the independent Erased Tapes label in London, part of a roster, along with Ólafur Arnalds and Peter Broderick, responsible for a growing scene of mostly electronic music. The tag of “modern classical music” is not always helpful, for music need not always have a label, and should be allowed to progress on its own terms. The acts use a combination of analogue and electronic means to realise their music. 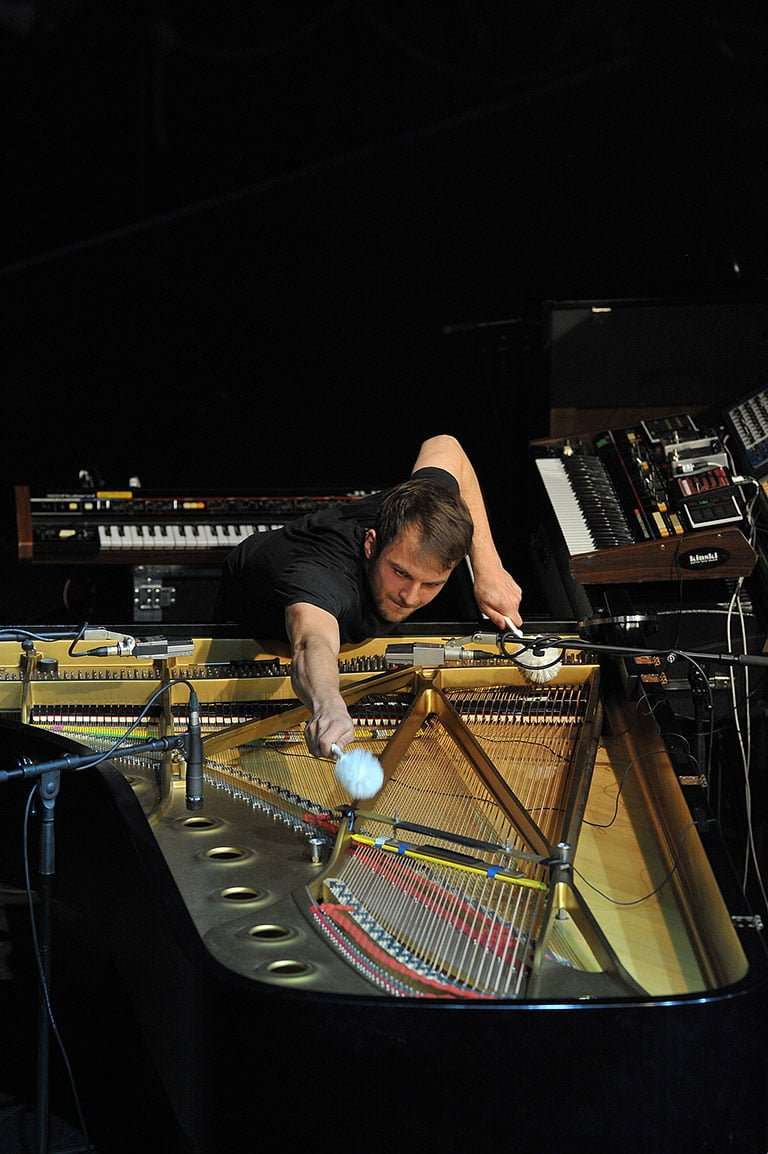 This night’s performers demonstrated the art of making music of pure emotion through simplicity. This is not a new phenomenon, but when harnessing atmospheric electronic effects it can be incredibly effective, either in the flesh or through headphones. The sensitive use of lights and smoke added to the already heady atmosphere in a hushed Royal Albert Hall, the capacity audience unbowed by the tube strike.

Frahm was a hyperactive presence, moving between keyboards during ‘Says’, from the 2013 album Spaces, which dropped a warm and extremely resonant bass tone to power its harmonic movement near the close. The timbre of each instrument was as important as the resultant notes, boosted by a muffled looped arpeggio in the background. Frahm’s prepared upright piano, its hammers altered, made a mottled sound that suggested music projected through cotton wool, while the grand piano, also prepared, had a metallic edge to its lower notes.

Frahm is an artist who appears to have absorbed much Beethoven (the ‘Moonlight’ Sonata especially), Chopin and Debussy, and his music draws in-part from those composers, along with a simplicity employed by Philip Glass in ‘Solo Piano’, though the electronic additions gave a more varied sound picture.

Debussy’s Danses sacrée et profane (harp and strings) had appeared on 6 Music as part of the station’s championing of classical music in the previous week, and the composer provided a harmonic reference for the faster section of ‘Hammers’, the figurations reminiscent of the piano in the finale of Debussy’s Cello Sonata. Frahm closed with the longer ‘Toilet Brushes – More’, again from Spaces, and indeed this featured toilet brushes as makeshift drumsticks on the piano strings, a slightly gimmicky moment that gave way to clumps of high chords with phase displacement and cross rhythms pooling elements of Steve Reich and Dave Brubeck. 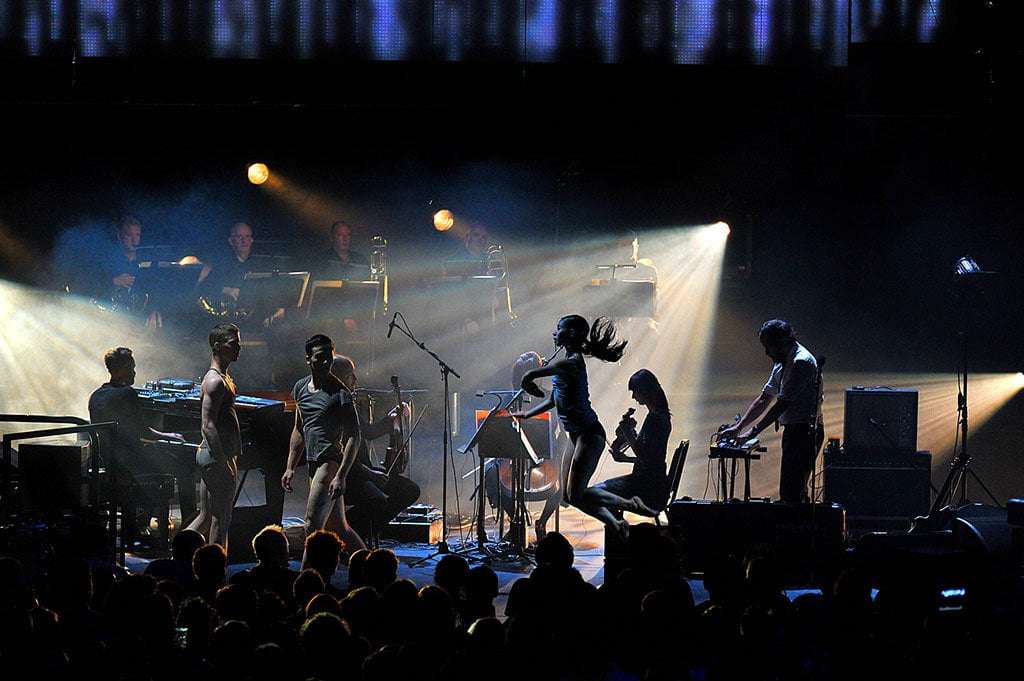 The set from A Winged Victory for the Sullen, the duo of Dustin O’Halloran and Adam Bryanbaum Wiltzie, proceeded at a much slower pace, forming an atmospheric arc. Concentrating exclusively on their second album ATOMOS, a collaborative piece with Wayne McGregor and Random Dance, it was dominated by clumps of piano chords and soft keyboard pads, enhanced by an uncredited string trio and the sonorous tones of London Brass. The brass quintet could have been used more, for its potential to add colour was only fleetingly glimpsed, but the keyboards and strings created timeless atmospherics that gave the impression of gliding above the clouds – or, in ATOMOS VI, seemingly leaving them behind on a journey through space, with synthesizer tendrils hanging above a full-bodied cell of piano chords. Sceptics would rightly say that very little was happening – but that was precisely the point, deconstructing music back to very linear essentials.

The duo found and sustained a balance between relaxation and tension, their slowly-moving harmonies and small melodic cells again enhanced by subtle electronic atmospherics. Three members of Random Dance appeared for ATOMOS VIII, their interpretation all the more impressive for the sheer physical effort required to maintain an apparent state of relaxation, at one with the music and expressing its latent energy.

The most effective part of the programming was “Collaboration”, where the two sets met in the middle, an improvised five minutes whereby Frahm, ghosting in on stage-right, added treble and melodic cells to a slowly moving backdrop from A Winged Victory on the left. Although positioned far apart the chemistry between the artists was clear, suggesting future collaboration would be fruitful.

Criticisms will no doubt be made on the simplicity of the music on display, but as anybody who has tried composing ambient music will testify, sustaining tension and interest it is a lot easier in theory than in practice. These artists did both, and the audience was stock still throughout, applause given as and when the moment permitted. Mary Ann Hobbs’s selection certainly enhanced this year’s Proms festival, bringing with it the hope that 6 Music will get an annual late-night slot to showcase music from other labels too – Bella Union, Warp and Ninja Tune to name just three.