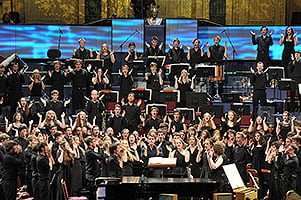 On paper this looked to be one of the oddest Proms this season – how could you follow Turangalîla with anything? But Anna Meredith’s HandsFree (with NYO movement-tutor David Ogle) – a PRS New Music 20×12 commission for the Cultural Olympiad – couldn’t come anywhere but at the end of a concert. It’s like a wind-down exercise. With the NYO (a mere 165 members!) standing, forming six groups, and performing their various hand- and body-claps in swaying, wave-like symmetry, the visual pattern was striking. No instruments are used except what the body provides – hands, legs, torso, voices. The first half is just for clapping and the second introduces long, sung chords and a rather swishing form of beat-boxing. There’re no score and no conductor, though subtle tempo changes are occasionally indicated from the podium by a member of the orchestra.

I wasn’t sure I wanted anything after Turangalîla, but was quickly won round, not only by the novelty of the piece but also the extraordinary unanimity of the performance. In fact, the concert would have been satisfying enough with just Nico Muhly’s impressive new work Gait, and Turangalîla, but to balance HandsFree we had another ‘occasional’ work – Edgard Varèse’s Tuning Up. This was never fully realised by the composer (after a request from film-maker Boris Morros to compose something for Carnegie Hall, which included cameos from Fritz Reiner, Leopold Stokowski, Bruno Walter, Gregor Piatigorsky and Jascha Heifetz), but was fashioned from two different sketches, which start in the same way, by Chou Wen-chung for Riccardo Chailly’s complete Varèse recording project fifteen years ago. This too needs no named conductor (at least not at first). The NYO’s leader, Roberto Ruisi, stood up and indicated for the oboe to sound an A, before stealing the limelight with a virtuoso flourish. What followed was five minutes of witty pandemonium, with internecine squabbles within sections (the leader of the double basses remonstrating with a colleague after the latter’s mobile phone went off; the flutes ganging up on their principal) as well as snatches of Wagner and Beethoven and a siren sounding from within the Hall, before Vasily Petrenko made his way through the throng to restore some semblance of order. 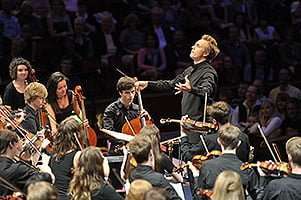 As for the main meat, this was the third time that the NYO has brought Turangalîla to the Proms (under Mark Elder in 1986 and Sir Andrew Davis in 2001, both with Cynthia Millar). The class of 2012 can hold its head up high with this multifaceted performance that encompassed all that Messiaen meant by the collective word Turangalîla. Perhaps rather measured in the fastest passages, where needed the performance was suitably languorous, especially in the slow, central heart of the work, ‘The Garden of the Sleep of Love’. Petrenko is an admirably clear conductor, the many abrupt changes of tempo taken seamlessly. Joanna MacGregor effortlessly took the piano part and Cynthia Millar’s ondes Martenot did not overbalancing the textures.

More modest in length (a few seconds under 23 minutes) Nico Muhly’s Gait is a winner. It must be like Christmas when you’re commissioned for such a large orchestra – including seven flutes and clarinets, five oboes and bassoons, and four harps. The latter were immediately in the spotlight, setting up a repeating five-bar quaver pattern, to which other instrumental groups gradually add their own ‘gait’. Cast in a continuous span, the faster outer sections enclose a slow, dreamy central panel with trombone then flute, oboe and trumpet solos gently resting on a shimmering accompaniment, Muhly dictating a blueprint but allowing players to ignore the conductor (“skip notes, add rests, ignore other players” is one instruction in the score), with the massed percussionists with woodblocks gently intoning a clip-clopping rhythm as if at some distance (the dream was of horses that became reality). The fast final section (marked ‘Precise’) has some wonderful effects – the buzzing bassoon and double bassoon stuttering for example – building up to a John Adams-esque climax (Harmonielehre era, perhaps), ending in a welter of sound that is suddenly cut off. Hugely impressive both as a piece and as a performance, it looks as if the NYO has got itself another party piece.