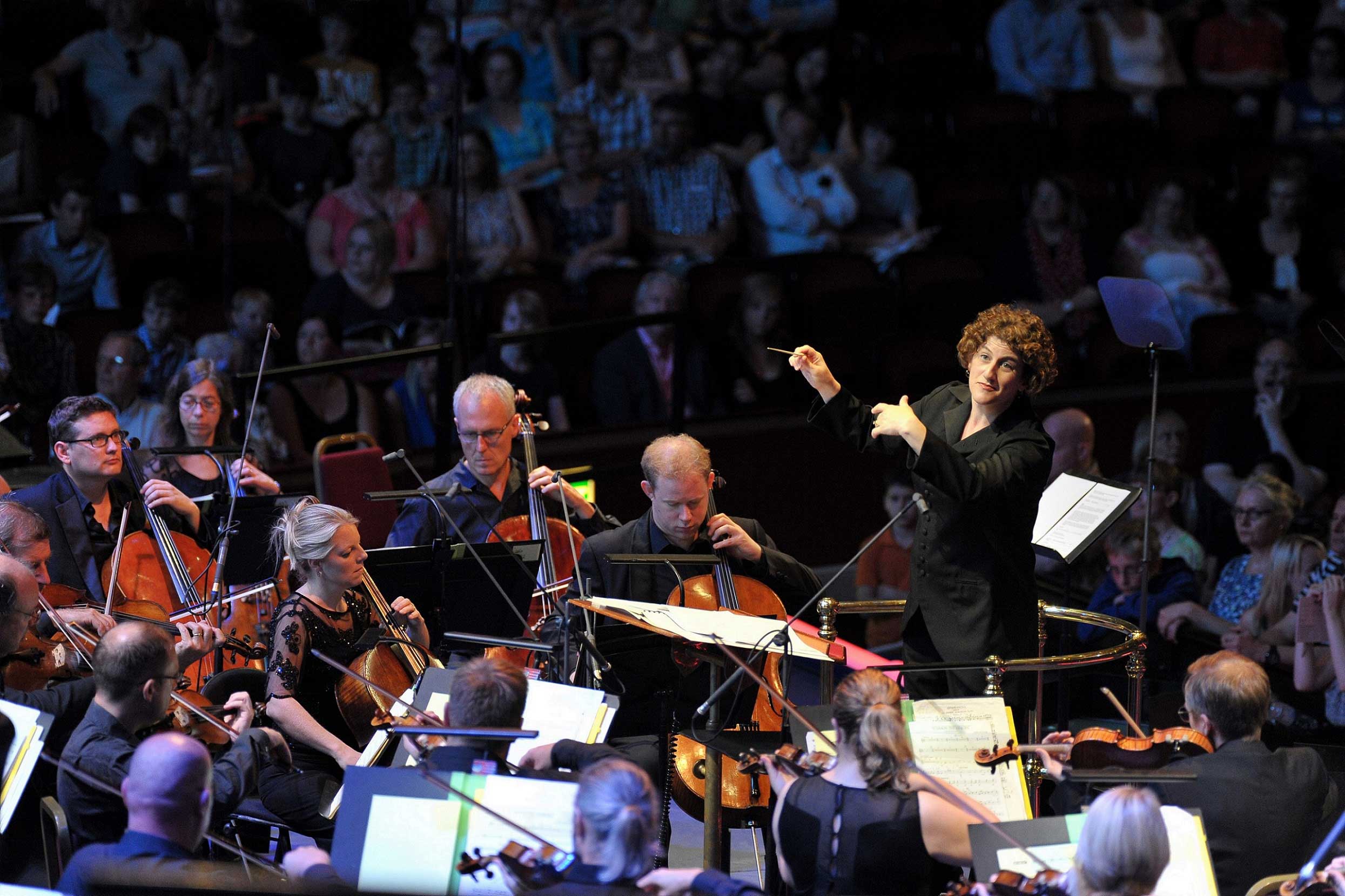 The Proms went sporty with this hearty attempt to broaden the appeal of classical music. Good to see a large number of children in the audience – not least bearing in mind the concert started at 10.30 on a Sunday morning. Gabby Logan introduced a variety of sporting faces, including Phil Tufnell (the “cheeky chappy” of cricket), Robin Cousins (ice-skating), Fabrice Muamba (the Bolton Wanderers footballer who suffered a heart-attack during a match), Barry Davies (the doyen of commentators), Kenny Logan (rugby union … and Gabby’s hubby), Anne Keothavong (tennis) and Anna Watkins, the Olympic gold-medallist rower.

The morning launched with some schmaltz, Hollywood-style, Summon the Heroes by John Williams, for the 1996 Atlanta Olympic Games. After this we launched into Booker T’s ‘Soul Limbo’, the Test Match theme, which showed the limitation of popular music being expressed in a classical format, the energy of this piece muted by the arrangement. Josef Strauss’s Sport Polka was performed with style and Waldteufel’s Skaters’ Waltz was given with smooth elegance with Torville & Dean videos as a backdrop. Robin Cousins confided that he rehearsed mostly to a symphonic version of The Rolling Stones’ ‘Paint It Black’, that he likes Led Zeppelin and that his brother plays the bassoon. Barry Davies, the doyen of commentators, introduced as only he can the ‘Match of the Day’ theme, performed in samba style but again losing much of the original’s flavour. Then ‘Tennis Elbow’, the Wimbledon sig-tune, but the enthusiastic snare-drummer drowned out his colleagues. We then returned to firm classical ground with a polished outing of Carl Orff’s ‘O Fortuna’, then sliding into Prokofiev’s ‘Dance of the Knights’ (Romeo and Juliet), well paced, and familiar to Sunderland FC supporters. 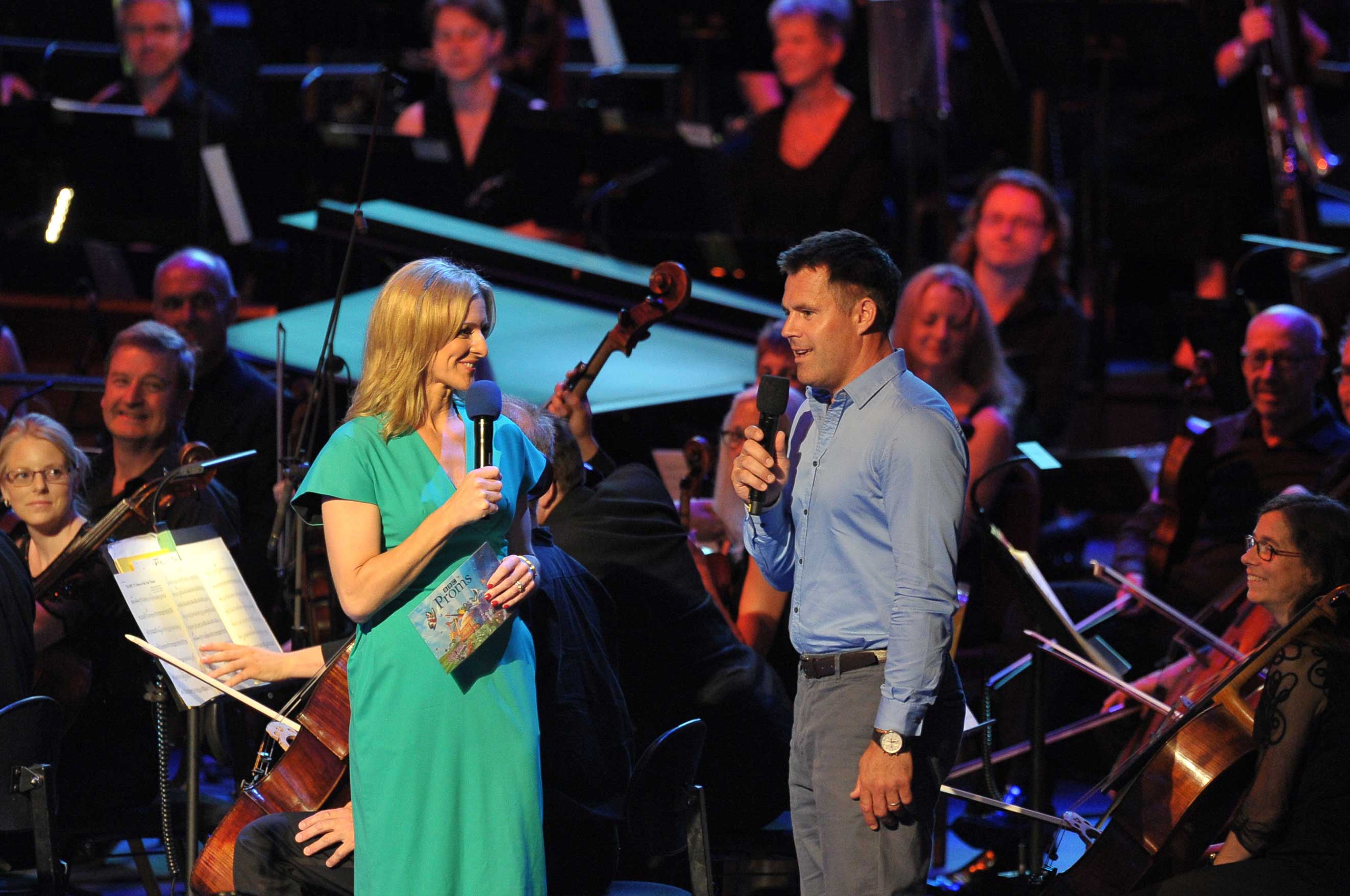 Kenny Logan confided that his favourite piece of music is from Holst’s Planets Suite, from ‘Jupiter’ – here ‘The World in Union’ (nice play on words there) – and then came Mozart’s A Musical Joke, the finale of which is the Horse of the Year Show intro, but its brisk canter was blunted by the use of percussion instruments that were not known to Mozart, even though it was ‘as heard on TV’, although Wolfgang Amadeus’s closing grinding dissonances were intact. Ravel’s Une barque sur l’océan (from Miroirs) gloried the UK’s Olympic rowers in a sure and luxurious ride. Football was the game for a while, with a couple of tokens from Shostakovich’s ballet-score, The Age of Gold, and Fabrice Muamba introduced us to Richard Rodgers’s ‘You’ll Never Walk Alone’ (the Liverpool FC anthem) – with rousing chorals and audience participation, so too Freddie Mercury’s ‘We are the Champions’, if less popular-sounding. An on-the-piste ‘Ski Sunday’ curtain-raiser ended the whole.

This was certainly a guilty-pleasures concert with many of us enjoying the classics, and if the popular stuff didn’t translate too well to a different format, it was certainly an excellent entry-level for children and beginners into the classical world. My Classical Source colleague Robert Matthew-Walker reminded that the Royal Albert Hall has hosted indoor sporting competitions for decades, so the notion of bringing sport and music together was not entirely unsuitable as a concept. Time was indeed when the FA Cup Final at Wembley was prefaced by a half-hour of military band music and community singing. Bob expressed sadness that music written for past Olympic Games by some great composers – Richard Strauss, Carl Nielsen, Josef Suk and Werner Egk – went unheard, and Honegger’s Rugby would have partnered Kenny Logan keenly. Yes, there is always something else that could have been done, and this was a concert of two halves.