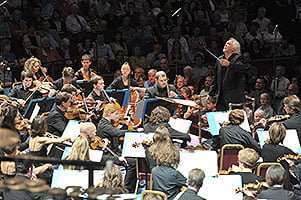 So, the Loch Ness Monster is a tuba! Thea Musgrave has composed an inventive, sometimes witty, 11-minute piece that begins in murky depths. One senses a leviathan approaching, shoals of fish disperse, snatches of a Scottish chorale are heard and the scoring takes on a sun-stroked iridescence. In what might be heard as a day in the life of Loch Ness, A Postcard from Scotland (2012) shows the 84-year-old composer as communicative and commanding as ever. Ben Thomson gave a consummate account of the stand-out, gratefully written tuba part.

This serendipitously assembled Prom (if something of a travelogue) opened (if you don’t count the National Anthem, mercifully shortened – someone was in!) with James MacMillan’s Fanfare Upon One Note (2012). Well, if Purcell can fantasise on one note… MacMillan’s 3-minute workout is raucous and clangourous with a base element of solemnity; and quite exhilarating. The combined brass and percussion of youth and pro certainly filled the Royal Albert Hall’s space. As did the collective full forces for the Wagner, which Donald Runnicles (genial and encouraging if rigorous) kept on the move and turned elegantly; joy and vitality instead of aggrandisement (although the doubled cymbal clashes were aggressively steely). 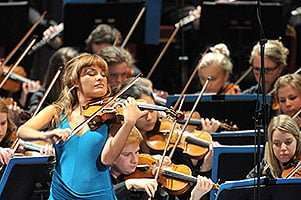 The National Youth Orchestra of Scotland did the honours in Max Bruch’s Scottish Fantasy, a wonderful piece all too rarely heard and there are other scores of his that deserve attention beyond ‘Bruch’s Violin Concerto’ (as it is so often announced, with an ignorance of the subsequent two). Bruch makes affectionate and integrated use of traditional Scottish melodies in music that touches the heart and invigorates. This was a mixed performance though; there was plenty to admire in the accompaniment, but although Nicola Benedetti offered some daring pianissimos and ear-catching confidences, her lack of tone and volume in high-lying fortissimo passages and a rather laboured approach to the most pyrotechnic writing introduced blandness where brightness and easefulness should take hold. As an encore she and Daniel Rainey (leader of NYOS) offered an encore, ‘On leaving Lerwick Harbour’ in which the two players’ sounds were distinct. 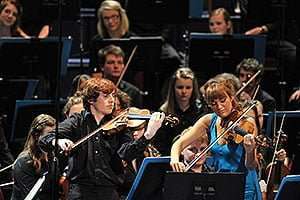 The BBCSSO had Don Juan to itself, Runnicles inspiring a rollicking and fresh performance, impetuous while intertwining and dovetailing with musical attentiveness. Stella McCracken conjured a seductive oboe solo that was tenderly answered by the strings, before our lover was off on his rounds again before a heroic death. 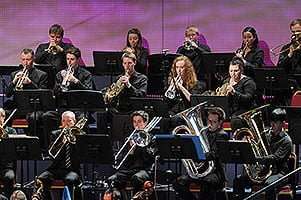 And then to Italy for Respighi’s Technicolor Roman spectacular, the orchestras combining big-time. The opening children-at-play section was not the most immaculate in detail but was nicely good-humoured. The middle sections really held the attention, though, but did we need a trumpeter to leave for the offstage solo and then return – very distracting and surely there were enough players for one to be positioned already, ideally further away and higher than we got? Nevertheless the depths of the Catacomb and the fragrance of the Janiculum Hill were transporting, Runnicles’s close observation of articulation and dynamics feeding the music’s picturesque qualities, and one could only be captivated by the velvet-cushioned strings. Respighi’s prescribed nightingale, once an acetate and no doubt now of pristine digital plumage, chirruped very agreeably from a nest in the RAH roof. The closing march of ghostly then vibrant warriors signalling Rome’s military history resounded brassily (31 players) – organ fully present while remaining in good balance – Respighi’s vision of mighty legionnaires dispatched triumphantly by Scotland’s finest.