“Following his two Proms appearances in 2008 and his more recent one in 2011 to play solo violin works by J. S. Bach, Nigel Kennedy returns with Vivaldi’s The Four Seasons – with the Palestine Strings from the Edward Said National Conservatory of Music as well as members of his own Orchestra of Life. Revisiting a work he recorded to great acclaim nearly 25 years ago, he brings fresh insights to these visionary concertos, including the addition of his own improvised links between them.” [BBC Proms website] 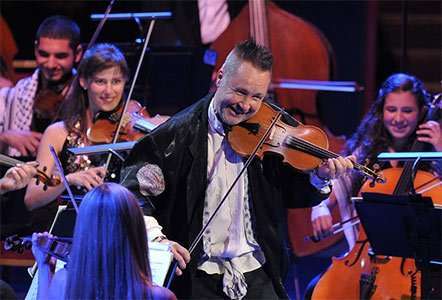 What is Nigel Kennedy for?

For the Proms he’s a guaranteed sell-out – indeed rare must be the evening that 12,000 people can throng the Royal Albert Hall’s rotunda, but here, starting ten minutes later than advertised because there were so many people to get in.

To the ‘period’-instrument exponents Kennedy seems to be the antichrist. Although he almost refrained from speaking from the platform, he had voice in a written introduction in the programme in which he dismissed the whole ‘authentic’ practice, as an argument for his use of piano (for continuo in the bits of filtered Vivaldi, and for the jazz inserts, played by Gwilym Simcock) and vibrato. I had never thought of Kennedy and Boulez in the same camp, but ‘Nige’ never ceases to surprise.

He’s obviously a draw, though, and there may be a case that his faux chaviness (yes, he’s still fist-punching the air and touching hands with – visibly less enthusiastic, perhaps? – colleagues) draws a wider audience than might be otherwise. But I suspect there was some of the audience that didn’t get what they’d come for – a reprise of Vivaldi’s Four Seasons, as Vivaldi wrote it. Indeed, asking people what they did expect came up with different answers. I had assumed, rather like the recent performance with Piazzolla’s Four Seasons, we’d have the Vivaldi alternating with the promised Kennedy additions; another thought we’d have Vivaldi’s Four Seasons first, then the improvisations, rather like Kennedy’s last Prom, which started with Bach and went on from there. 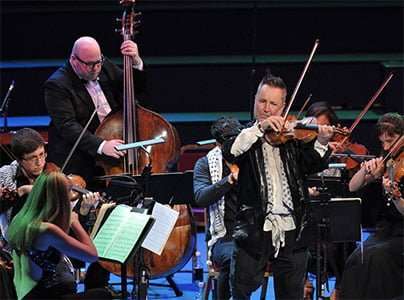 But no, what we got (and rather enjoyable it was too) was an extended riff into which Vivaldi was a common thread. It was as if, like Schubert’s sketches for his Tenth Symphony, we were in a world where only a few bars of each Season had come down to us, and Kennedy had filled in the gaps in his own style: in the same way as Berio did with the Schubert to form Rendering. In Vivaldi’s case we sometimes got jazz – Spring quickly segued into Duke Ellington’s ‘It don’t mean a thing (if it ain’t got that swing)’ – with Kennedy sidling back towards his Orchestra for Life pianist, percussionist and bass-player, or – more impressively – the Middle Eastern interpolations from the excellent, over-the-shoulder keffiyeh-sporting Palestine Strings (its members aged between 12 and 23), including one vocal number, which brought a real fell of authenticity to proceedings.

All this was for the most part very infectious, if perhaps (given the late start) too long. But for those that could stay to the end the best was yet to come. A fluff aside when Kennedy stopped and asked “How does it go?” and then, having been put back on-track by leader Lizzie Bell quipped “Oh yeah – this is a good bit”, his only banter was left to the end, eliciting a very loud shout of “bollocks’ from someone in the Stalls, so thankfully Kennedy left the message to the music and the two encores were the highlight. First – the only bit of unadulterated Vivaldi (save a very few soft percussion additions from Kryzsztof Dziedzic) – we got the slow movement from the A major Two-Violin Concerto in which 15-year-old Mostafa Saad gave Kennedy a run for his money in producing the sweetest violin tone, and then (“another composer I love – Nigel Kennedy”) Kennedy’s self-penned Fallen Forest, which proved a perfect nocturnal signing-off.

Each to his own. This was an entertaining evening but perhaps it would have been more so if Kennedy had allowed the fact that what Vivaldi wrote is equally valid; well, more so. I’m happy to have both, but Vivaldi ‘straight’ will always get my vote…