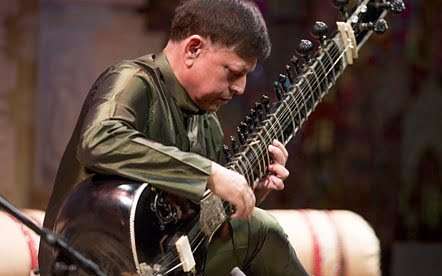 Curated by the Darbar Foundation, this long late-night Prom (extending into Saturday morning) celebrated the seventieth-anniversary of the ending of colonial rule in India, the creation of the modern states of India and Pakistan, and the musical traditions therein. There were three sets, presented without an interval.

The combination of sitar and tabla (the latter a percussion instrument similar to bongos) created a magic spell. Raga can be time-of-day specific, and ‘Rag Bihag’ is aimed at the “second quarter” of the night. The way this music emerges from the amorphous tunings and doodling never fails to engage. ‘Rag Bihag’ can be traced back to the sixteenth-century; and it lives on in mesmeric interpretations such as this. Pandit Budhaditya Mukherjee (“Pandit” refers to the rank of teacher, or expert) was the astonishing sitar-player. Beginning to learn his instrument at age five, Mukherjee spreads the word all over the World (since 1995, he is a visiting professor at the Rotterdam Conservatory). He exuded absolute confidence. Soumen Nandy on table entered surprisingly early, providing solid support and reacting to Mukherjee’s every move. This was a remarkably exploratory performance, the overall accelerando was beautifully judged, the tension raising subtly but inevitably, the levels of virtuosity for both players an inevitable reflection of the music’s blossoming, and after forty-five minutes it culminated in a jamboree of silvery sitar underpinned by rapid tabla.

The South Indian Carnatic tradition was represented by the husband-and-wife team of Kumaresh Rajagopalan and Jayanthi Kumaresh, joined by Anantha R. Krishnan, and included the wonderful sound of the Saraswati veena (the national instrument of India – its history dates back 2,000 years). Coming from the lute family, it has seven strings and twenty-four frets. Saraswati is the Hindu Goddess of learning. The Carnatic violin is held very differently from the Western instrument, and eschews vibrato. Krishnan plays the mridangam, an ancient two-headed drum that is the precursor of the tabla.

Two Carnatic ragas were performed. ‘Rag Charukeshi’ was first up, then ‘Rag Nattai’, and formed an interesting contrast to the Hindustani element, featuring more unisons (whether melodic or rhythmic). Rajagopalan’s melancholy violin was later capable of the most overt virtuosity in ‘Rag Charukeshi’, and ‘Rag Nattai’ found a greater reflective space, the instrument positively smoky in its lower register at first and featuring delicious dialogues between it and the magical Saraswati veena. Krishnan provided solid support before shining in his solo.

A medley of five numbers, devotional and secular, the Qawwali section of Pakistan had its distinct sound. Initially private music for shrines to Gods and Goddesses, it now enjoys a terrific following. The prevalence of clapping, the invitation to dance and the underpinning of the music via two hand-pumped harmoniums (a Western import via Portuguese missionaries: it was preceded by the bowed sarangi). The percussion was dhol (somewhat akin to tabla, and using sticks) and Fareed Ayaz and Abu Muhammad Qawwai were the two excellent singers.

The five items, based on Sufi mystery poetry, focused on the relationship of master and pupil in this tradition as well as more secular concerns with spiritual interpretations (a young woman having a tryst with her beloved, for example – but who is that beloved?). Ecstatic is a good description of Qawwali; call and response and a prevailing sense of infectious joy was the key here. One didn’t need to know the words to enjoy this, even the husky but nimble story-telling of the lead vocalists. Every time the music subsided, its potential energy resurrected the unstoppable rhythms. This was the closest we came to a party; theatrical delivery took us into a markedly dramatic space, while the penultimate ‘Baba Bulleh Shah’ at least temporarily invited some (comparative) introspection, and the late hour inspired the performers to maximum intensity.

So with a thankful nod to the Gods that enabled the all-night tube to be operational, we headed home from a whistle-stop tour of the kaleidoscopic tapestry that is the music of India and Pakistan.