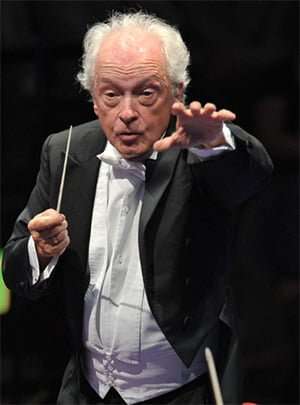 This enticing Prom from the Warsaw Philharmonic Orchestra (Orkiestra Filharmonii Narodowej w Warszawie) and its long-serving if here outgoing conductor, Antoni Wit – familiar folk from numerous Naxos recordings – proved them a vibrant partnership in the flesh. Opening with Lutosławski’s Concerto for Orchestra (completed in 1954), the Warsaw musicians, all natives save one member from the Ukraine and one from the United States, made clear their earthy and vivid capabilities, and distinctive timbres, playing their music, the first movement ‘Intrada’ an arresting call to attention, the second ‘Capriccio, notturno e Arioso’ mercurial and light (at a very lively speed) growing to intense lyricism. The extended finale, ‘Passacaglia, Toccata e Corale, opened in furtive (very quiet) circumstances, the double basses’ pizzicatos only just reaching the ear – so, perfectly judged – to launch a reading of propulsion and wistfulness, the orchestra’s virtuosity hard-won rather than ‘super’ as part of a deeply considered and well-run-in performance that concluded with grandiose gestures and a well-timed dash to the finishing post.

Centenarian Lutosławski and his friend Andrzej Panufnik (1914-91) made music together as pianists during World War Two in occupied Poland, sometimes to garner funds for the Polish Resistance. A decade or so after hostilities ceased, Panufnik would come to London and remain there. His Tragic Overture was written during conflict but destroyed along with other manuscripts. It was reconstructed from memory in 1945 and revised ten years later. Wit led a revelatory performance, bass riffs and elegiac solos rubbing shoulders, sometimes the mosaic-like scoring reminding of Martinů, and some other inventions of Honegger (now, there’s a composer shamefully out in the cold at the moment). Wit’s pacing was perfect, a trombone glissando intimated the siren of an impending air-raid, and the music accumulated tension and volume to its battering-ram conclusion. Very different is the remarkable Lullaby (1947/55), scored for 29 solo strings and two harps. This is not music to be comforted by; rather it is hushed, fragile and veiled, as inventive as it is (edgily) expressive, and exposed for the players who are often negotiating the highest registers of their instruments. The result is hypnotic and just a little fantastical, any images created finally distorting and fading, the harps signalling the end. Out of London, Oliver Knussen conducted it in 1998 to indelible effect; great then to catch up with it fifteen years later and forty since the capital last heard it. Bizarre! 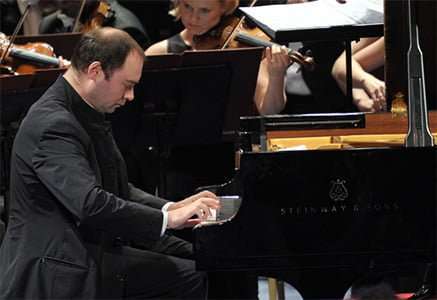 The Shostakovich works included Piano Concerto No.2 (1957, written for his son, Maxim) given a perky and deadpan outing, Alexander Melnikov the clear-cut soloist, a no-tricks and well-modulated account, with an attuned accompaniment, if handicapped a little by a piano that was over-bright and dry-sounding. If, in the finale, he was not totally on-song with the scales, the romance of the preceding Chopinesque slow movement was wonderfully tender and poetic, inward and serene. I suppose if you applaud long enough and drag the soloist back more times than needed he will eventually capitulate and play something else! In this case a dynamic and dazzling ‘Feux d’artifice’ from Book II of Debussy’s Préludes, Melnikov bringing out affinities with Scriabin while also stressing the modernism of Debussy’s creation.

As he did for all the other works in this Prom, the piano concerto aside, Antoni Wit conducted Shostakovich 6 (1939) from memory and with an obvious rapport with both the music and the musicians (despite the oppressive heat: air-conditioning not working?). The first movement, a lengthy Largo, was revealed as deep and dark, the woodwinds contributed pungently, and the with-chill passages were suitably lonely; sometimes the thinnest and quietest threads of sound held the air with pin-dropping significance, and mention must be made of the flute-playing, here and elsewhere, of Krzysztof Malicki, which was spellbinding. The two fast movements that follow, playing together for a little less time than that of their predecessor, were respectively given with stealth and Rossinian bounce; and if Wit tended to underplay the former’s acerbity and the latter’s ciphers, his and the orchestra’s musicianship were very satisfying on their own terms.

The Warsaw Philharmonic has a distinguished history, which almost came to an end during the devastation of the last War (the concert-hall destroyed and many of the musicians killed) but which was put back-on-track by conductor Witold Rowicki. There’s a certain old-world charm to be discerned in the current personnel’s playing – as displayed in the gavotte third-movement of Prokofiev’s ‘Classical’ Symphony – and it’s good to hear an orchestra whose brass section produces such a cultivated yet tangible sound without being too loud or blaring, and the small pair of cymbals made for a bright sneeze rather than the crude crash that a bigger pair make. And we weren’t done. The concert’s second extra had to be Polish, and it was, maybe the ‘Mazurka’ from Halka, an opera by Polish music’s father-figure Stanisław Moniuszko (1819-1872), which it wasn’t; rather the ‘Polka’ from Lutosławski’s Little Suite, his DNA informing every bar of it, brought this fine evening to a scampering finish.

With this concert Antoni Wit’s artistic directorship of the Warsaw Philharmonic came to an end. He now remains in Poland with a position to the Cracow Philharmonic and he also starts an appointment with Orquesta Sinfónica de Navarra. The Warsaw Philharmonic – which should be very proud of having given this standout Prom – opens its 13-14 season on September 22 with new man Jacek Kaspszyk.