A time there was, back in the 1960s and early 1970s, that the English Chamber Orchestra was as synonymous with Benjamin Britten as the Academy of Saint Martin in the Fields became with Neville Marriner. Though an independent body (it had no titular principal conductor until Jeffrey Tate in 1985), the ECO was the composer’s band of choice for several first performances as well as a clutch of his most famous Decca recordings. It has a better claim than most, then, to a place at the centenary table. The orchestra’s current music director, Paul Watkins (also the new cellist in the Emerson Quartet), proved a genial host at a musical feast whose hors d’oeuvre was Britten’s satisfying arrangement of Henry Purcell’s Chacony of 1678, in which the string players demonstrated that their legendary aptitude remains intact. 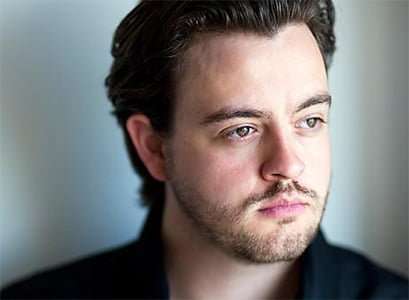 The headline work at this Saturday Matinee Prom was Britten’s ineffable Serenade for Tenor, Horn and Strings, whose solo parts were performed with distinction by the honey-voiced young tenor Ben Johnson (with an ‘h’) and Richard Watkins (no relation to the conductor). If there was little twilight in the horn-player’s big, affirmative account of the ‘Prologue’, within minutes the solo pair had conjured a real sense of eventide with the sunset colours they brought to Charles Cotton’s ‘Pastoral’. Watkins played with marvellous articulation throughout – the triplets at “Blow, bugle, blow” (in Tennyson’s ‘Nocturne’) were as clean as I can ever recall hearing them – and the singer matched him all the way, not least in the cruel run at “excellently bright” that closes the ‘Hymn’ by Ben Jonson (without an ‘h’). Passing flaws of intonation and accuracy from both artists were of piffling concern given their electric collaboration, and Paul Watkins wielded an exemplary baton throughout.

A rare outing for Variations of an Elizabethan Theme (Sellinger’s Round), the collective composition that Britten masterminded in 1953 as a second tribute (after his Gloriana) to the new Queen Elizabeth via reference to her historic namesake, gave us a chance to hear first-rate string miniatures by some of the mid-twentieth-century’s greatest names. The cuckoo in the nest might appear to be Arthur Oldham, whose stock as a composer faded fast (he is best remembered now as a dynamic choir trainer, not least with the London Symphony Chorus), yet his self-possessed contribution (placed first) recalled his mentor Britten’s more famous set of Variations, those on a Theme of Frank Bridge. Of the other original contributions to this celebratory garland only Lennox Berkeley’s was a disappointment, being little more than a technical exercise in counterpoint. Sadly the two commissions also failed to make their marks, both being overlong, and together they tipped the work as a whole off balance. In John Woolrich’s (antepenultimate) contribution interest palled after an assertive opening, while Tansy Davies’s charming textures could not disguise the lack of melodic momentum as the repeated rocking figure gradually morphed into dull minimalism.

Like Britten’s Serenade, Lutosławski’s Paroles tissées (Woven Words) was composed for Peter Pears and first performed by him at the 1965 Aldeburgh Festival. If the hauntingly repetitive words in Jean-François Chabrun’s four Tapestries are woven, as the translated title says, there are places where the orchestration sounds more like a kitten let loose on a skein of wool. Lutosławski’s colours are vivid and arresting – nowhere more so than in the yowling, descending string figures of the third section – and, yes, instruments do weave in and out of each other’s orbit and those of the tenor: now under, now over Johnson’s sinuous voice. Watkins and the ECO never dropped a stitch.