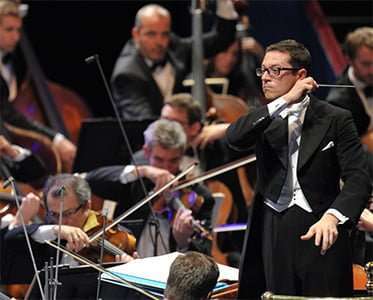 After each sensational concert by John Wilson and his handpicked orchestra you’d be forgiven for asking if there is any great music from Hollywood left to be discovered. Yet back he comes (every year at the Proms since 2009) with another collection of gems that is every bit as good as the last. The 20th Century Fox fanfare is known to filmgoers worldwide. Written in 1933 by Alfred Newman (who later became the head of the studio’s music department), an extended version was first used in 1953 for How to Marry a Millionaire. A similar coupling started proceedings at this Prom.

Such attention to detail runs through the John Wilson Orchestra, which takes the concept of authentic performance into the music of Hollywood. At ease with both the opulence of Bronislau Kaper’s Forever, Darling, and shrieking in the notorious stabbing-in-the-shower scene from Hitchcock’s 1960 masterpiece Psycho (for strings only to match the film being in black and white). If the strings are the foundation for this sort of music, the brass is the muscles – providing a wall of sound that is most evident in Jerome Moross’s The Big Country. Moross is close to a one-hit wonder with this main-title theme from the 1958 film starring Gregory Peck, Jean Simmons, Charlton Heston and Burl Ives; the sound is as big as the title suggests.

The JWO forces added up to 108 players here, providing not only volume but colour, as in the charming theme that David Raksin wrote for Otto Preminger’s 1944 movie, Laura. Preminger originally wanted Raksin to use Duke Ellington’s Sophisticated Lady but the composer objected. Alfred Newman convinced Preminger to give Raksin the weekend to come up with something better. Later Johnny Mercer wrote lyrics to the tune, but we heard Raksin’s concert Suite. 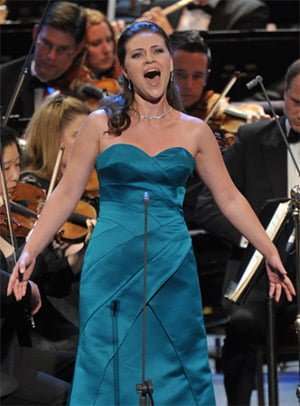 Bernard Herrmann is well-known for his collaborations with Hitchcock; however he composed scores for a number of other films including Orson Welles’s Citizen Kane. This film was the cinematic debut for men in possibly the best film of all time. The score was a landmark in Hollywood musical practice, replacing the non-stop underscoring with what Herrmann described as “radio scoring” where short musical snippets were inserted to bridge the action. ‘Salammbô’s Aria’ is part of an opera sequence that aims to expose Kane’s protégé Susan Alexander as an amateur. Herrmann put the aria in a key that would stretch the singer, making her reach a top D at the end, which was outside her range. Venera Gimadieva had no such trouble, giving a powerful presentation of this delightful pastiche.

Where other composers copied the Hollywood sound, Erich Wolfgang Korngold created the sound. The Oscar-winning music that he wrote for Warner Bros. 1938 film The Adventures of Robin Hood was unusually symphonic and in a style that would change the way Hollywood sounded in the future. The orchestration employs instruments that were largely to be found in a symphony orchestra of the time and, together with a wide variety of percussion, gave Korngold the colours he wanted. His three-movement Suite, given a weighty performance here, was a dramatic and fulfilling conclusion to the first half of this Prom.

Max Steiner, commonly referred to as the father of film music, was born in Austria and was taught by Johannes Brahms and Robert Fuchs. He composed over 300 film scores including King Kong, Gone with the Wind, and Casablanca. The Suite from the latter opens with the Warner Bros. fanfare that Steiner wrote in 1937 followed swiftly with variations on the ‘Marseillaise’ and the Deutschlandlied – the German National Anthem. Two timpanists add to a remarkable score that includes probably the best-known song from the film – As Time Goes By – written by Herman Hupfeld for the 1931 Broadway revue. Steiner weaves the music around the piano’s song, played by Matthew Regan, not Sam! 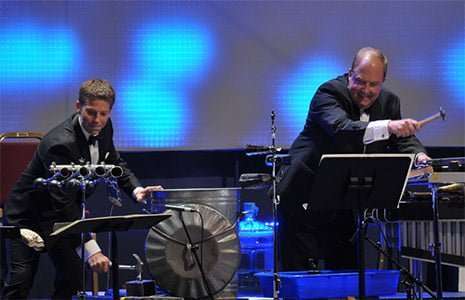 Maybe as an appeasement to Wilson’s song-loving audience, and in recognition of the huge number of famous numbers to come out of Hollywood, he put together a Movie Theme Song Medley. Enjoyable as it was to hear the songs – almost all now standards in the American Songbook – their inclusion was unnecessary. Matthew Ford and Jane Monheit took turns culminating in James (‘Jimmy’) Van Heusen’s ‘All the Way’ as a duet. There was the inevitable disjoint between the sound from the microphones through loudspeakers high above the stage and the orchestra below. Why not place the speakers amongst the orchestra to make the sound more even?

The two vocalists were replaced by the alto saxophone in Franz Waxman’s Suite from A Place in the Sun (1951). The angular melodies together with a restless cadenza were welcome fodder for Howard McGill, who gave the music gravitas in contrast to the big-band style heard earlier. From sublime to the absurd as Wilson and co-conspirator Pete Morris arranged the music that Scott Bradley wrote for MGM’s Tom and Jerry. The score is incredibly difficult to play, coping with extreme changes in speed and tone, here brilliantly side-stepping the revolving doors, anvils and smashed crockery from two errant percussionists.

As a finale, the most epic of scores – Ben-Hur in a Suite by Miklós Rózsa orchestrated by fellow-Hungarian Eugene Zador. Rózsa conducted the recording sessions which lasted over 72 hours, recording more than two-and-a-half hours of music for the hour-longer film – at one time the longest score ever composed for a motion picture. Typically the John Wilson Orchestra gave a commanding performance that included the Royal Albert Hall organ bringing the programmed concert to a climatic conclusion. Never expecting to get away without playing an encore (“It just so happens…”), we heard ‘The Ride of the Cossacks’ from the 1962 film Taras Bulba, starring Yul Brynner and Tony Curtis. Up-tempo and sparkling this was a magnificent ending to a superlative concert.