Berlioz
Benvenuto Cellini – opéra semi-seria in two Acts and four scenes to a libretto by Léon de Wally & Auguste Barbier based on Cellini’s autobiography [performed in a composite version of Paris versions I & II and Weimar versions, compiled by John Eliot Gardiner, based on the Urtext of the New Berlioz Edition, published by Bärenreiter, edited by Hugh Macdonald; sung in French, with English surtitles] 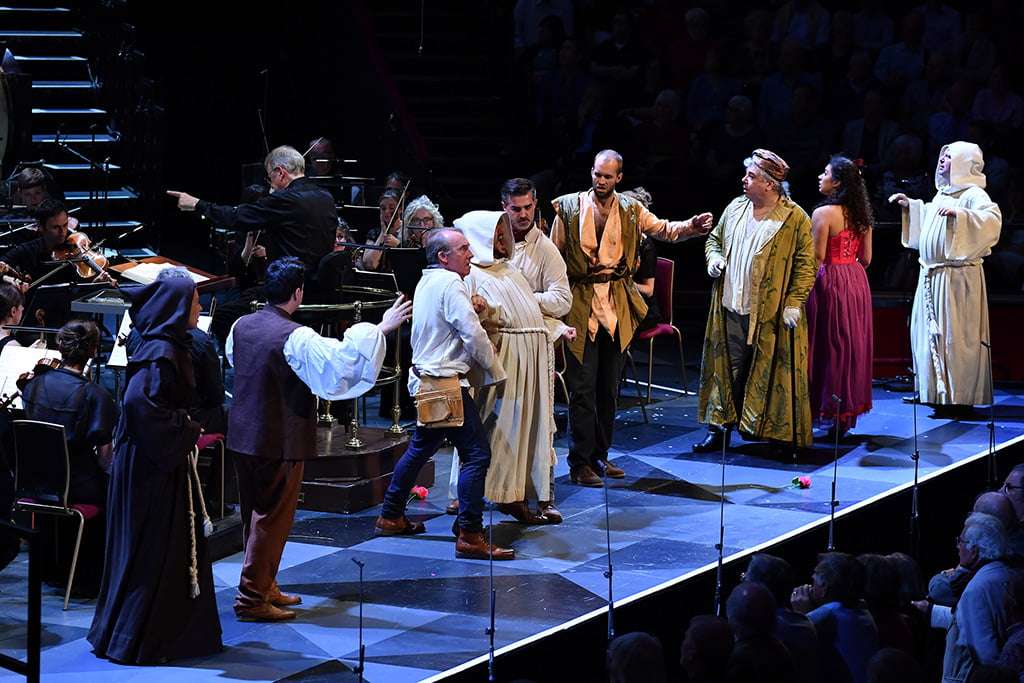 September may have arrived, ushering in the waning of Summer, the home stretch of this year’s Proms season, and here the end of John Eliot Gardiner’s five-year Berlioz cycle at the festival. But this performance unleashed a torrent of musical exuberance and rhythmic vitality from the Mediterranean South, with the Rome-based opera Benvenuto Cellini, no doubt honed by Berlioz from his sojourn in the city after winning the celebrated Prix de Rome. Listeners who are only familiar with the Roman Carnival Overture will have recognised the origin of much of its material in this stage-work.

Sir John Eliot’s conflation of the work’s two versions tends to favour the earlier (hence the two Acts of 1838, rather than three of 1852) but removes its spoken dialogue, opting instead for a continuous stream of music – often Wagnerian in its harmonic richness, but still identifiably Italian in its vocal lyricism, and leavened by French finesse. The period instruments of Gardiner’s Orchestre Révolutionnaire et Romantique secured a consistently lithe and alert reading of the score, as it moved seamlessly from one scene to the next, with a generally polished, wooden timbre, but not infrequently emblazoned with lustrous brass. 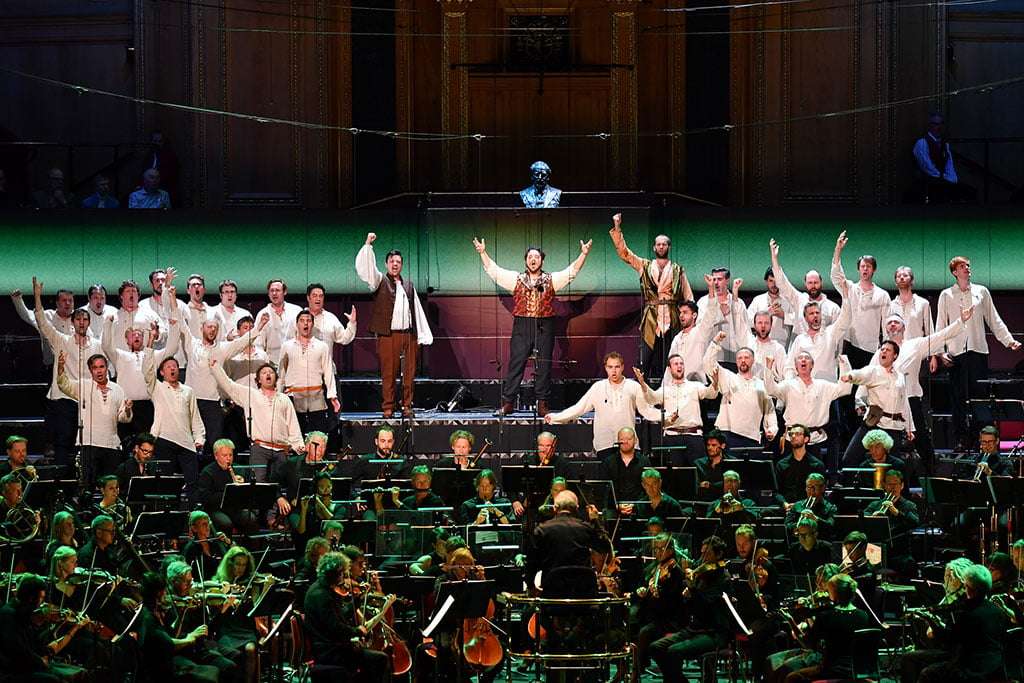 The through-composed version presented may also have taken over some of the work’s longueurs as a result but I would not have wished to miss the opportunities it gave the ORR to demonstrate so ably its myriad textures and hues, and even if it had not been enacted, it would have been possible to trace the dramatic ebb and flow. But Noa Naamat’s staging made dynamic use of the Royal Albert Hall’s stage, both in front of the orchestra and on the steps behind, enabling the chorus of carnival-goers and friars to come and go, providing additional dimensions. Vivid lighting also set an evocative atmosphere for the different scenes. It is a pity cameras were not present to relay the performance, live or recorded.

The characterful interpretation by Gardiner and the ORR was complemented by a charismatic cast of singers, who tended to bring out the comic and human aspects of the drama, further correcting any lingering misperceptions of this work as some wild, monstrous creation. Michael Spyres led, with a warmly supple account of the title role which often calls for a Donizettian agility, in the tenor’s higher register, and which he achieved suavely. Sophia Burgos as his beloved Teresa was musically bright and attractive, even delicate, if a touch wiry in tone, but she despatched the coloratura subtly – Berlioz, at this stage in his career, evidently still yielding to prevailing Italian fashions. That is true also of the role of her philistine father, Balducci, in the same type of comic bass role of many an opera buffa, and played as such by Maurizio Muraro, if somewhat impassive musically, and not entirely distinct in his articulation. 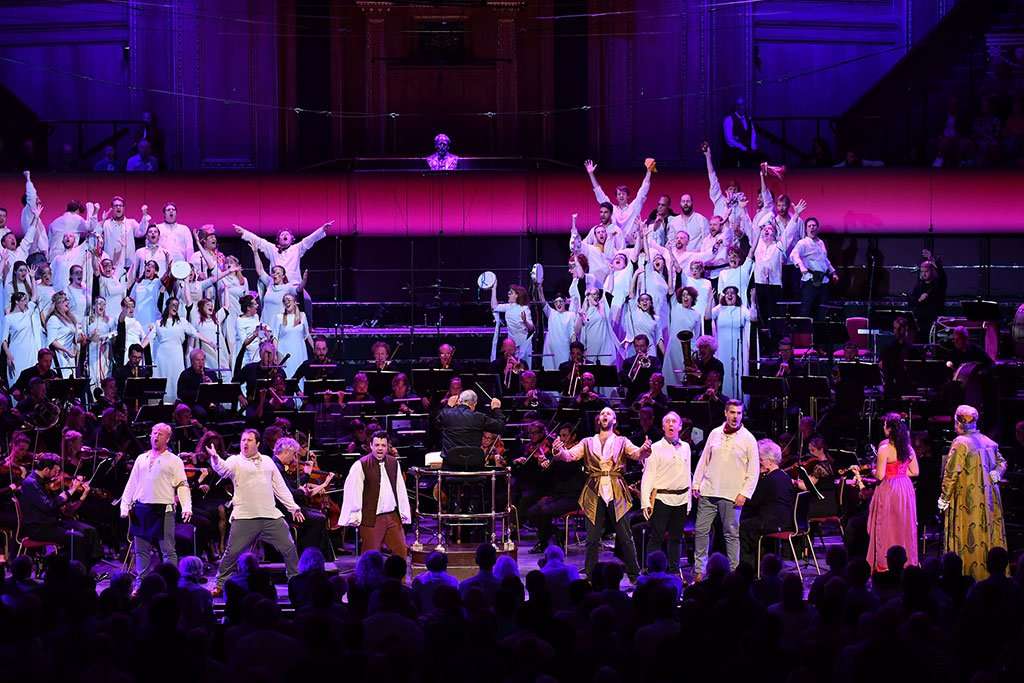 Tareq Nazmi offered greater vocal presence, though a similar level of humour, as the art-loving Pope Clement VII, who commissions Cellini to create his famous sculpture of Perseus (still to be seen in Florence today). In a coup de théâtre, the latter was taken here by an actor, the impressively-built Duncan Meadows, whom London audiences will remember as the Executioner in David McVicar’s production of Salome.

Lionel Lhote, Vincent Delhoume, Ashley Riches and Adèle Charvet all acquitted themselves well with idiosyncratic contributions, rounding out an inspired cast and keeping pace with the exacting demands of Berlioz’s writing. Likewise the members of the Monteverdi Choir combined energy and sensitivity, both in the varied music given to the crowds at different points, and in the choreography devised for them, which replicated as much visual spectacle as could reasonably be expected on a concert-hall stage.

This was a fitting tribute to Berlioz in the 150th-year of his death, and all the more welcome in view of the regrettable omission by London’s opera houses in celebrating the composer this year, and a not especially engaging production of The Damnation of Faust by Glyndebourne. It should convince sceptics that Berlioz’s genius was as well adapted to the stage as to orchestral or non-dramatic vocal composition.