Semi-staged for the BBC Proms by Ian Rutherford 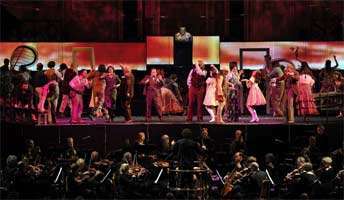 For his return to the Sussex Downs following an inspired yet conservative Billy Budd in 2010, director Michael Grandage has transformed Mozart’s sublime comedy of musical manners into one of those dodgy European sex romps that used to do the rounds in the nineteen-seventies. They still resurface from time to time on short-lived provincial tours; all big hair, bad clothes and fixed-wing collars, they’re the sort of thing that used to be sent up mercilessly on The Fast Show. But what were they doing here?

Good things, happily, at least for the most part. The result was unlikely to be everyone’s glass of sangria, but throughout Grandage’s production (deftly reshaped by Ian Rutherford to fit onto a modest platform behind the orchestra) there were episodes where form and content slotted together with surprising felicity. For example, at the climax to Act Three when Barbarina (Sarah Shafer, young and feisty) embarrasses the Count (Audun Iversen in splendid voice as a crotchety Almaviva) in front of his wife, the borderline-hysterical atmosphere of low farce caught the moment dead centre. As for the decision to fill the stage with party-goers dancing the Twist and the Hitchhiker to Mozart’s melodies, that was comedy at its cheekiest. All the more unfortunate, then, that the perfunctory performance by Vito Priante in the title role proved so staid. The young Italian baritone sang Figaro’s notes well enough, with a pleasing tone, but his lack of characterisation left a void of blandness at the heart of an otherwise giddy production. 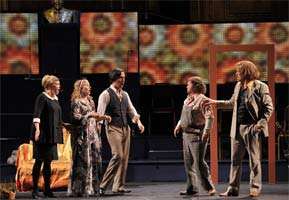 Ironically, despite the broad visual gags on display, the musicianship of Robin Ticciati and the Orchestra of the Age of Enlightenment was the last word in polished refinement. Glyndebourne Festival’s Music Director-elect was meticulously attentive to the score: nothing was raw-edged and dynamic choices were exquisite. I might have welcomed a couple more desks of violins to boost the treble sound (the cavernous Royal Albert Hall does tend to obfuscate delicacy at higher registers) but in other respects it was a revelatory account. For example, from Ticciati the extended ostinato that chugs ominously under the action at the climax of Act Two here sounded improbably – but thrillingly – Beethovenian.

Sally Matthews, who has always been a silver-voiced soprano, appears to have evolved in vocal resonance, and her rendition of the Countess’s great arias crowned the performance. If ‘Porgi amor’ was touching, ‘Dove sono’, which she delivered with a rich, centred tone and a gentle hint of vibrato, was sublime. Matthews’s voice blended closely with those of Lydia Teuscher (Susanna) and Isabel Leonard (Cherubino); perhaps too closely as their vocal colours were practically interchangeable during the characters’ shared shenanigans in Act Two. Tonal differentiation was more apparent in the Countess and Susanna’s delicious third-Act duet, ‘Sull’aria’, which was sung with melting beauty. 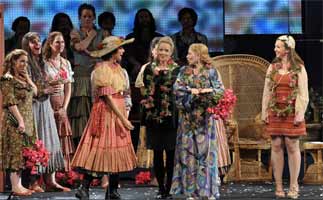 Leonard presented quite the most girlish Cherubino I have seen. More gamine than gamin, the young American sang with a sweetness that not only denied her character’s hormonal priapism, it offered barely a whiff of masculinity. Grandage’s reason for such an un-male characterisation is unclear, as it undermined the knowing humour of the scene where a girl dressed as a boy dresses up as a girl; nevertheless taken on its own terms Leonard’s charm was irresistible. Teuscher, too, was enchanting, particularly once she had got past her early scenes with Priante and had the dramatic freedom to interact with some better-defined characters.

The minor characters were all superbly cast and sung. Alan Oke was a flouncy Don Basilio; Nicholas Folwell a curmudgeonly Antonio, Ann Murray a Lady Bracknell-esque Marcellina and Andrew Shore a roguish Bartolo whose skipping, applause-milking exit at the end of his Act One aria, ‘La vendetta, oh, la vendetta’, was pure showbiz. That’s the way to do it: leave ’em wanting more.