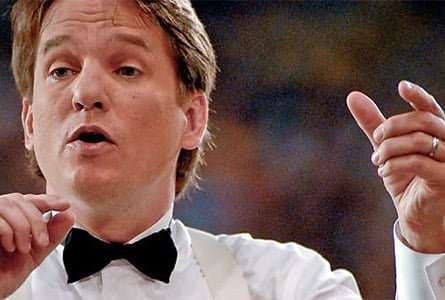 Following closely John Wilson’s Hollywood Prom, the BBC Concert Orchestra, with its Principal Conductor Keith Lockhart, presented a programme of film music (note not music from the movies). With English terminology set, the first half focussed mainly on wartime Britain; the second was sci-fi and superheroes – music taken from blockbuster, er, movies. The ever-versatile BBCCO is well-versed in this genre so it was disappointing to find William Alwyn’s The True Glory so poorly executed. Strident brass and percussion engulfed strings and woodwinds from in this short and insubstantial work

The Walton fared much better as muted trombones snarled while twirling strings tangled in a dogfight. His Battle of Britain score never made it into the eponymous film save the Spitfire music. Hollywood took a dislike to Walton’s efforts, commissioning Ron Goodwin to write something more substantial. As rescued by Colin Matthews the Suite shows Walton as master tunesmith and orchestrator – and the ‘March’ is classic Walton. By contrast, the snippet from Leighton Lucas’s contribution to Ice Cold in Alex is much less sophisticated. Lucas wrote many film scores, including for the The Dam Busters. 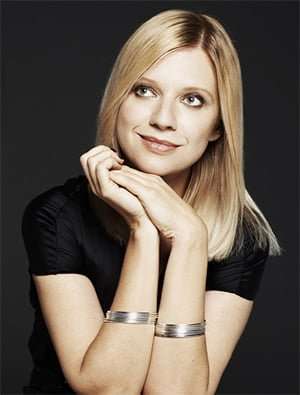 Richard Rodney Bennett sadly died on Christmas Eve last year. Elegy (for viola and orchestra) is arranged from music that he had written for the 1972 costume drama Lady Caroline Lamb. Lawrence Power’s impassioned performance in the recurring love theme gave cohesion to the disparate elements that make up the work. Masterfully orchestrated it includes a significant part for harpsichord that subliminally sets the music in an earlier time (early 1800s) while using a melodious style. To end the first half, probably the most famous of the bunch: the Warsaw Concerto that Richard Addinsell wrote for the 1941 melodrama Dangerous Moonlight. Originally the director wanted to use Rachmaninov’s music, but for copyright reasons Addinsell was asked to write something that sounded close to his music. Valentina Lisitsa is an obvious choice having affinity with the Russian composer’s music. However there was too little cohesion between her and Lockhart who found it difficult to respond to Lisitsa’s varied tempos.

The three excerpts from 2001: A Space Odyssey moved one to another. This worked well; however a short break after the Ligeti to clear the aural palate would have been appreciated. Richard Strauss’s ‘sunrise’ from Also sprach Zarathustra received a straightforward reading (on the quick side) but mercifully without the gratuitous rallentando that often appears when this opening from severed from the rest of the work. While the Ligeti (what we got of it) is not standard fare for the BBCCO, this was a well-prepared performance. The ‘other’ Strauss (Johann II) felt hurried, the music tumbling headlong. It got better, though the piece was brutally truncated.

The latest of the Star Trek movies, Into Darkness, was released earlier this year. Michael Giacchino’s score, dynamic and rhythmic, carries the movie from scene to scene as any good score should. However, we heard the premiere of a Suite that does the opposite, opening with Alexander Courage’s original TV theme that switches, without development, into the music from the new movie. The effect was a disjointed hodgepodge. 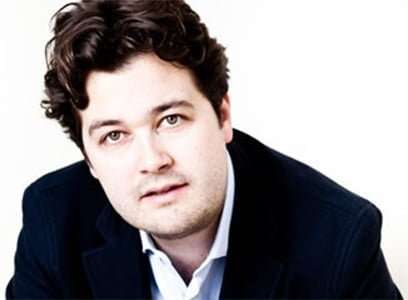 David Arnold signalled a return to melody in the music written for the sci-fi disaster movie Independence Day. The massive percussion section requires two peals of tubular bells, together with a pair of large bass drums and a pair of tam-tams. Despite a potential ‘wipe out’ of the strings and woodwinds the balance was good and Arnold’s long flowing melodies shone through. As with Walton’s Battle of Britain, Jerry Goldsmith’s score for Alien suffered at the hands of director and editors. Music was cut, moved around and even music that Goldsmith had written for other films was used. Though cut from the final film the carefully crafted end-titles music (replaced by Howard Hanson’s Symphony No.2) recalls material that was introduced earlier in the film. The hauntingly beautiful trumpet melody, here perfectly executed, provides a satisfying closure to the movie and a brilliant link to the music of John Williams that followed.

When George Lucas started the project that was to be Star Wars he was keen to mimic Stanley Kubrick’s 2001 by using a variety of classical pieces to accompany the movie. John Williams persuaded Lucas that an original score would evoke the emotional appeal that he wanted and the rest – six movies later – is history. Williams uses the Wagnerian technique of Leitmotif to give each character a theme. This Suite uses music taken from the first two movies. Princess Leia’s theme, naïve and romantic, is in the best tradition of Hollywood love themes and calls for extended solos for the horn, flute and violin. The Cantina Band music was originally scored for trumpet, saxophone, clarinet, steel drum, synthesizer, various percussion and Fender Rhodes piano. Here the music is considerably scaled-up both in length and orchestration. The final ‘main title’ music brings together many of the leitmotifs, including Leia’s theme in a dramatic and glorious conclusion to the film and the Prom. The BBCCO kept the music fresh and Lockhart, who at various times introduced the music, reminded us that he became conductor of the Boston Pops Orchestra in 1995, following in John Williams’s footsteps. “He’s a hard act to follow”, so it was apt that the encore would be the superbly uplifting and beautifully played main title to another Williams score: Superman.