“We’re going on a bear hunt! There’s fun for all the family as Michael Rosen takes his much-loved book as the starting point for a whole new set of adventures. Along the way, illustrator Tony Ross conjures up pictures live on big screens and the RLPO and children from In Harmony plunder the music of composers including Mussorgsky, Grieg and Stravinsky to find the most exciting, most dreamy and most scary tunes, all bound together with original music by Ian Stephens. And there will be lots of opportunities for the audience to join in.” [BBC Proms website] 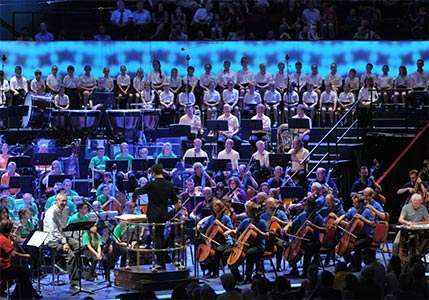 Aimed at members of the audience under 12 years of age, this Prom matinee got a big thumbs-up from its junior critics. With Michael Rosen, author of award-winning book, We’re Going on a Bear Hunt, as guide, and with illustrations beamed onto big screens by Tony Ross (probably best known for his Horrid Henry drawings), from the start this was destined to be an experience far greater than the music on offer.

The adventure, as found in Rosen’s book, was expanded so that we heard not only the traditional wavy grass (swishy swishy!), swampy mud (squelch squelch!) and swirling whirling snowstorm (hoooo woooo!) – set to a vividly pictorial score by Ian Stephens – but also pirates, mermaids, a great gate and a king found deep under a mountain, to mention but a few. Ian Stephens’s score answered a commission by the Royal Liverpool Philharmonic in 2009, and this version, written for a larger orchestra with two extra ensembles, remains a favourite amongst the Phil’s audiences. 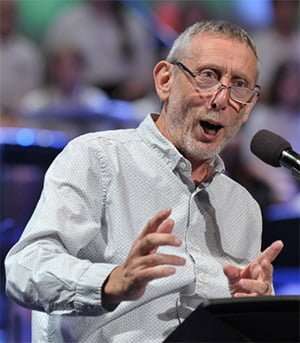 Before setting off to hunt, our intrepid companions were presented through Jonathan Willcocks’s three-minute introduction to the instruments of the orchestra. Each section wore a different coloured shirt – the violinists wore red; the cellists maroon – making it easy for those unfamiliar with instruments to identify them. Brilliant idea! The RLPO was augmented by In Harmony Liverpool and the Liverpool Philharmonic Children’s Choirs. Both groups are part of the RLPO’s extensive learning-programme that offers young singers and musicians opportunities to get involved in classical music-making.

Matthew Coorey made little concession to the young players (dressed in green) who played alongside their RLPO coaches. Even if some of the youngest members were occasionally passengers (‘A Spin through Moscow’ was taken at a fair gallop) there were no glaring mistakes and occasionally we got to hear the instrumentalists on their own – crisp trumpets in ‘La Bamba’ for instance. The choir (over 80 in number) was made up of eager participants: vocally and visually – they had been choreographed to ride horses (Gangnam style it seemed) and shimmy during the two Mexican numbers. Most commendable was the singing of the ‘Evening Prayer’ from Hansel and Gretel – the choristers beautifully in tune, words clearly audible.

Neither was any concession made to the very young audience in terms of the music chosen. John Adams’s Short Ride in a Fast Machine, given great rhythmic impetus, was latched onto by the youngsters. Similarly ‘Nocturne’ from Britten’s Matinées musicales (after Rossini) caught the attention of a few; the protestations of Rosen to keep quiet (in case they woke the bear) fell on deaf ears. With every stick there came a number of juicy carrots including the swashbuckling high-energy title-score from Pirates of the Caribbean. Keeping to the nautical flavour there followed Alan Menken’s ‘Under the Sea’ – sung by the choir and many children in the Hall – the calypso rhythms stamped out by In Harmony maracas, tambourine and bass drum played. Villa-Lobos’s ‘The Little Train of the Caipira’ is a beautifully crafted piece, excellently played; however the subtlety of the scoring was lost on the many that started to fidget and talk.

Mussorgsky’s ‘The Great Gate of Kiev’ was quite the opposite as Ravel’s bold orchestration held the attention of everyone at the end of the concert’s first half, and at the start of the second (it was given a brief reprise). The additional ‘hums’ and ‘oohs’ from the choir was an unnecessary distraction. Less often heard, the lyrics of Grieg’s ‘In the Hall of the Mountain King’ are particularly gruesome referring to hacking off of fingers, boiling into broth and roasting on a spit. The words really set the piece alight but were not as clear as they were in the Humperdinck with only “Slay him” cutting through the orchestra.

Eventually the bear was found … hidden in a cave and, once awake, set chase through the woods accompanied by Elgar’s scurrying strings as found in ‘The Wild Bears’. The race home, as in the book, retraced the steps through the musical tapestry that had run to that point. “We’re not going on a bear hunt again”, Rosen proclaimed, as the closing music from Stravinsky’s The Firebird was heard, sending the children on their way, an image of the bear looming over the bed of the children in the story slowly emerging on the pad of Tony Ross. “We’re going on a bear hunt … We’re not scared” – well, perhaps just a bit.