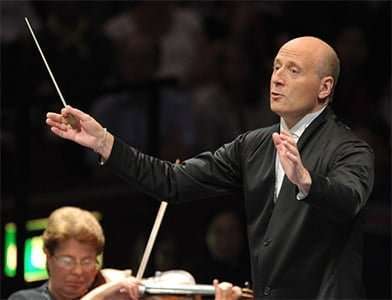 With autumn still on leave of absence, here was a Prom of contrasting summer moods: lowering and sepia before the interval, sunny and primary-colour-saturated thereafter. Estonian Paavo Järvi and the Orchestre de Paris, of which he is music director, presented an attractive, predominantly Anglo-French programme to a packed audience whose entente was never less than cordiale.

Many of us first encountered the music of Arvo Pärt in a 1979 Prom that was also televised, in which Gennadi Rozhdestvensky and the BBC Symphony Orchestra gave the UK premiere of Cantus in memoriam Benjamin Britten. Järvi eased his way into a superbly controlled account of his fellow-countryman’s short requiem with the stillest of passing bells. These gave way to the music’s haunting and repeated descending figure that finally came to rest on a low, sustained tonic chord. Dignified and devastating, it felt like a burial. 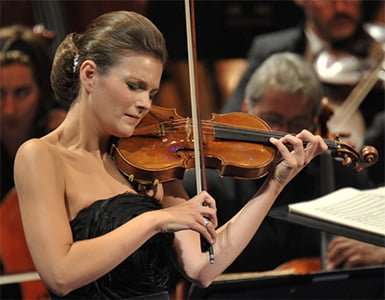 The Cantus was an inspired mood-setter for Britten’s Violin Concerto which, in Janine Jansen’s precise yet expressive reading, emphasised the music’s mournful quality. The Dutch soloist’s sound was small, her tone sweet, and her approach romantic yet never saccharine nor sentimental. The refinement of her playing was exquisite – a plucked string was like a pebble skimming on a pond – yet she brought an epic virtuosity to the cadenza that links the second and third movements. Maybe Jansen’s interpretation of the finale was too contained, although first impressions can be deceptive. Her pacing of this closing ‘Passacaglia’ was calm and restful at first, like a lullaby, but as it progressed her instrument’s smile became fixed until, torn between major and minor, it howled its desperation into fetid air. 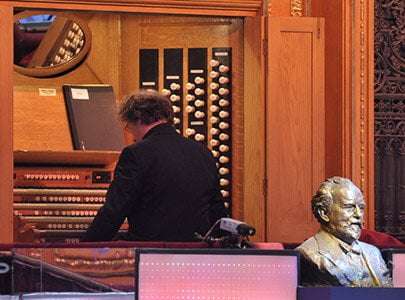 After the interval the Parisian players shed their English brogues and got the oxygen pumping with a dash through Berlioz’s euphoric Le Corsaire. After that, endorphins coursing, they launched headlong into the ever-popular Third Symphony of Saint-Saëns. While there may have been a few missed turnings in Järvi’s sometimes hard-driven reading (the strings tended to lose definition in rapid passages), his musicians fizzed. The Orchestre de Paris has a warm sound these days: mellow, homogeneous strings and brass that is neither strident nor over-ripe – and, in Frédéric Macarez, a heroic timpanist. Thierry Escaich’s registrations can hardly be blamed for a Royal Albert Hall organ that wheezed asthmatically in the Poco adagio second movement. On the other hand he attacked the rumbustious finale with a massive mechanical sound that came close to drowning out even the trumpets. Splashes and all, it was quite a ride.

This enchanting concert was brought to a crowd-pleasing conclusion with ‘Galop’, the final movement of Jeux d’enfants by Georges Bizet, the evening’s third purveyor of Gallic warmth. The nights may be drawing in now that September is here, but our long summer of music never felt warmer.