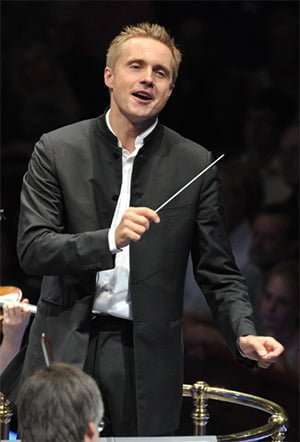 Norway put its best foot forward when the Oslo Philharmonic was joined for its second Prom this season by Christian Ihle Hadland, the pianist from Stavanger – and a BBC Radio 3 New Generation Artist of distinction. Equally effective as soloist, chamber musician and accompanist, Hadland is prodigiously gifted, graced with a refined technique and expressive subtlety that isn’t immediately signalled by his owlish, benign persona. Refinement was very much to the fore, both from Hadland and the Oslo PO’s new conductor Vasily Petrenko, in Beethoven’s B flat Piano Concerto, but they also added an infectious vitality to remind us that rhythm was the force leading Beethoven away from the classical poise of Haydn and Mozart towards romanticism.

So far everything that Hadland has given us has turned to quietly gleaming gold; even so, his playing here was something special. The accents that breathe air into the phrasing, the carefully graded echoes that make Beethoven’s patterns hum – Hadland didn’t miss a trick at making the music flicker with light and shade. What’s just as satisfying is that his limpid, light touch projected into the Hall with a clarity that had the ear straining for the next nuanced sound particle – and then there is the lightly-worn grace and wisdom of a musicianship that already knows its worth. 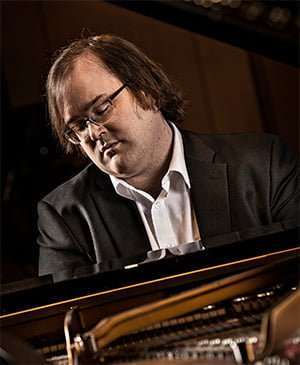 I much enjoyed the sly wit with which the antique-sounding contrapuntalism at the start of the first-movement cadenza expanded into earthy ebullience, and his lead-out from this solo moment was played with exemplary tact. Hadland’s innate understanding of the scale of the Concerto – all the more surprising given that this was also his Royal Albert Hall debut – glowed through the intimate reverie in the Adagio, and regrouped for a bustling, conversational finale. Petrenko could not have been more flexible and supportive, directing the Oslo musicians to allow Hadland’s wondrous playing to flow to maximum effect. The pianist’s encore – a ‘Galliard’ by William Byrd from My Ladye Nevells Booke – was a nicely judged nod to Englishness and played with obvious delight in and understanding of its renaissance idiom.

It’s baffling why the ‘Romantic’ Symphony is generally considered the way into Bruckner’s music – the “I wouldn’t have started here” joke comes to mind, as does – given the amount of revision Bruckner undertook in the Fourth – the line “I used to be indecisive, but now I’m not so sure”. The quality of much of its material and magical atmosphere ensures its success, but it’s still a slog, and the structural confidence and interest of the later symphonies set up expectations in the Fourth that aren’t fulfilled – and it’s a minefield for conductors in choosing from the various versions and editions (the 1874 original is quite different to subsequent re-writes).

The first movement’s lay-out is easy enough to follow, but the slowish second is inconclusive, managing to be a funeral march that marks time; the simple plan of the scherzo guarantees its triumph, but the finale is really testing, as much ‘get on with it’ as ‘stop getting on with it’. Material rotates as in a rondo but without much accumulative power. Crescendos collapse bathetically into nothing; themes reappear for no reason. With such an abundance of material, I’ve yet to hear a performance that clinches the finale; this one from Petrenko didn’t buck the trend. Not helped by some noisy settling down that rendered the opening strings’ rustle barely audible, Inger Bessurudhagen’s eloquent horn solo was exposed rather than surrounded by a misty halo. This brief acoustic lapse, though, alerted listeners to the fact that, surprisingly, Petrenko didn’t exploit the Hall’s distance potential as effectively as he had in the Beethoven. The sound, especially from the woodwinds, was confined rather than expansive, and Petrenko’s preoccupation with tonal beauty – amply realised, especially from the strings – inevitably heightened the Symphony’s episodic and formulaic proclivities – the pre-development transition sounded more like head-scratching. In that sort-of-slow second movement, Bruckner gets near to a Hansel and Gretel naivety, music that’s content to stand and stare and which didn’t respond well to Petrenko’s vision-seeking. The hunting horns in the scherzo worked brilliantly, and the Symphony’s ersatz medievalism came into its own. Yet, after a superbly coherent start to the finale, Petrenko got stuck in the music’s waywardness to a close as unconvincing as it usually is.