Beethoven
Piano Concerto No.4 in G, Op.58
Bruckner
Symphony No.9 in D minor 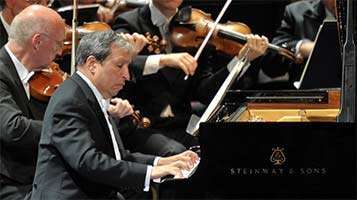 The Vienna Philharmonic gave core repertoire for the first of its two BBC Proms, reminding us of the unassailability of the Viennese tradition, expressed in its inimitable sound, which the Royal Albert Hall floats admirably.

The Proms has fielded over 100 performance of Beethoven’s Fourth Piano Concerto, including the legendary one with Pires and Chailly of blessed memory. Murray Perahia’s (his first at the Proms) with Bernard Haitink was in the same transportational league. This is Beethoven’s symphonic music at its most refined, sometimes teetering on the edge of grandeur but preferring a lyrical, dream-like interior world. From the way Perahia gently pushed the concerto out of the subliminal with the opening chord, you knew that he would continue in the same miraculously connective vein. 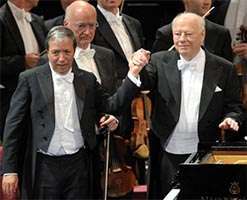 It seemed that the soloist’s role released its hold on privacy only with great reluctance, laying bare the basic concerto aesthetic with exemplary directness and creating tension in the constant reversions to its original state.

Perahia and Haitink made Beethoven’s point most clearly in the slow movement, an extended one-trick gesture in a realisation of Zen-like depth and mystery. The release into the playful brilliance of the finale was like being offered a gift for coming through the ‘test’ of the first two movements. Every degree of volume, each nuance of phrasing, the way rhythm suddenly asserted itself, was full of meaning, delivered by Perahia with his familiar concentration and deferential flair in a truly recreational account. The only fly in the ointment were the trumpets in the finale, which sounded surprisingly intrusive against the otherwise finely woven playing. 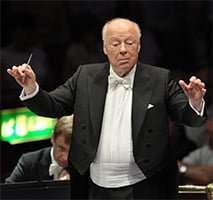 The last time I heard Bruckner 9 conducted by Haitink, I was struck by the uncompromising bleakness that overtook the slow (third) movement. Perhaps the conductor, who for many is still Bruckner’s earthly representative, had folded in the healing psychology of the Beethoven, because the catastrophic climax, heralded by a superbly threatening flute solo, managed to dissolve into a mood of shriven consolation – and, although Haitink is not an advocate of the Ninth’s completion, he left us in no doubt that the three existing movement are far from the whole story. 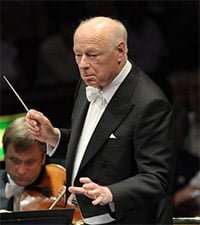 Haitink’s modesty and economy of means has become more extreme as he gets older, and both aspects give his conducting an extraordinary empathy and directness – just the opening of his left hand is full of significance, while his right hand’s rhythmic flexibility dips in and out of the swell of Bruckner’s inexorable pulse that belongs to another musical dimension. The levitation away from the home key right at the start of the first movement said it all about the visionary power of the music, with an unerring and steely sense of purpose. The VPO strings moved from bleached-out paleness to incandescent richness with intuitive ease; sometimes though the woodwinds seemed a bit too submissive, noticeably in the trio of the scherzo; and the brass, when not in wave-breaking fortissimo mode, often seemed applied rather than integral.

The overall arch of the music was intact, however, even though its destination remains uncertain. The hall was packed, and the audience knew not to clap between the movements (how could anyone do so after the devastating close of the first movement?). The spectators responded generously to that gesture Haitink makes at the end of such a big work, which gives permission to react.