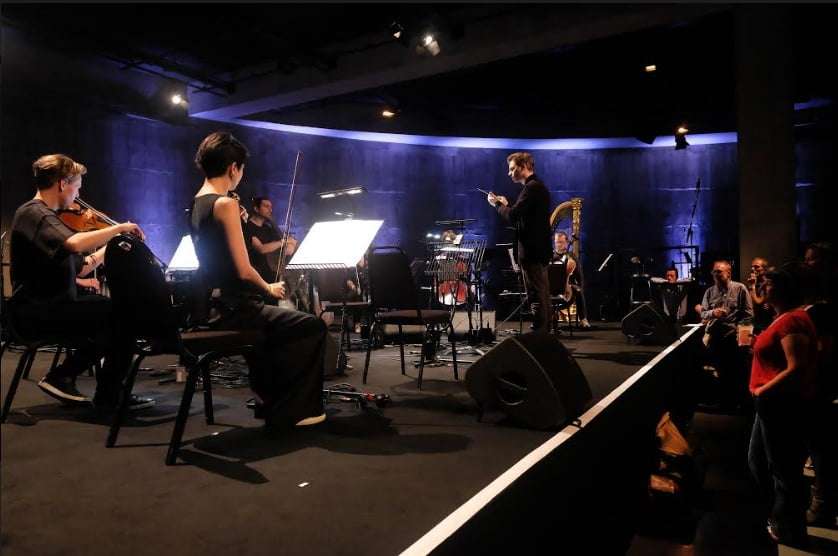 When Sara Mohr-Pietsch tells you that you may walk around so as to “curate your own listening experience”, it’s a sure sign that you’re in the rarefied air of arty intellectualism. The works presented at the Open Ear Prom were music at its most abstract and experimental and probably best described as patterns of sound.

The challenge with this sort of material is that, like Abstract Expressionist visual art, its effect is entirely at the level of the personal – which particular colours or patterns appeal to an individual. To some, for example, Rodrigo Constanzo’s untitled light-show-accompanied random riffs for snare drum and contact microphone might have been a stimulating exercise in feedback wails and percussion techniques; to others, it sounded like nothing so much as a muted heavy-metal band being repeatedly pushed down the stairs. 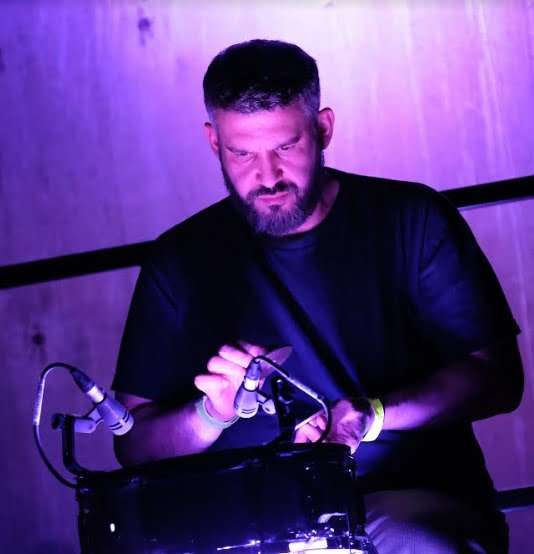 Emilie Levienaise-Farrouch’s The Minutes (the second word pronounced to mean ‘tiny things’), played with concentrated accuracy by The London Contemporary Orchestra under Hugh Brunt, consisted of the these-days-inevitable cluster chords built up from long-held notes played by the strings, bows initially barely touching to maximise the harmonic overtones. As the touch became firmer short ostinato passages developed, giving a feeling of direction and development, which then faded back to nothing.

The most engaging part of the programme contained works by established artists in the field: Catherine Lamb, Cassandra Miller and the club-night electronic virtuoso Actress. Lamb’s BBC commission Prisma interius V, written specially for the round concrete space of The Tanks worked well. The sounds were produced by three groups directed by Robert Ames: the strings of LCO, a trio of glass harmonica, bass clarinet and harp, and a synthesizer, programmed to broadcast sounds of pre-selected frequencies picked up by microphones on the Tate roof. What emerged was a restful echoing dreamscape of timbres: the twinkling of the harp and harmonica underscored by calm strings; the occasional directionless presence of noise from the synthesizer; and the odd mournful clarinet note (although the requirement for a bass instrument was unclear, as most of these notes didn’t even enter the chalumeau register of a B-flat instrument). 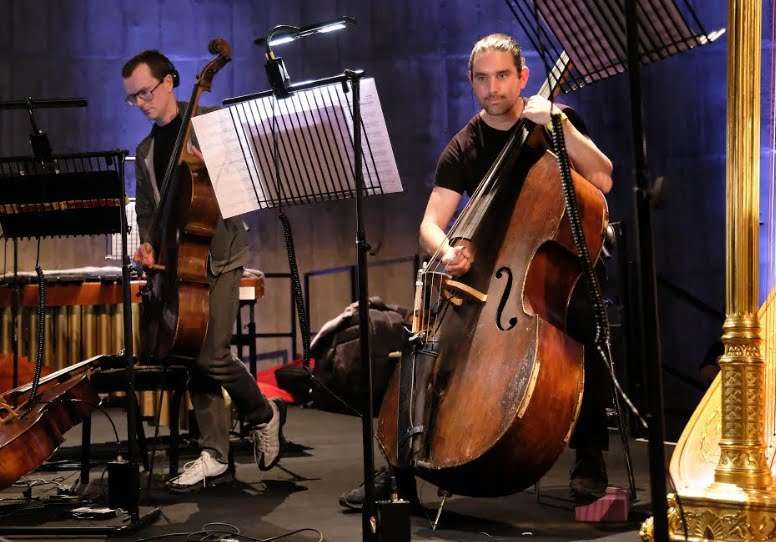 Cassandra Miller’s Guide was another in the series begun by her Bel Canto – a choral exploration of the voice of Maria Callas. In Guide, the eight singers of Exaudi reproduced the vocal techniques and tropes of the Southern Baptist hymn ‘Guide me, O thou Great Jehovah’ as sung by Maria Maldauer. Haydn in his ‘Little Organ Mass’, uses polytextur – setting different sections of the text to be sung at the same time by different voices – and Miler expands on this, treating the musical material in the same way, such that ten Maria Maldauers were all swooping and emoting in overlapping musical lines, creating an overall vocal jangle, within which different strands rose and fell. It is a fascinating work, but one which, after the initial idea was realised, called for a shorter exposition.

Momentum – a collaboration between LCO and Actress – was the most enjoyable piece. Combining electronic manipulation, sampling and other DJ effects with real-time acoustic sounds – from glass bottles, a prepared piano, a mouthpiece-less clarinet and a plastic bag, among others – it packed into its eight minutes a welter of different timbres and rhythms, from distant otherworldly note-clusters to rhythmic hip-hop-derived material, providing a worthwhile-after-all close to a very late evening.