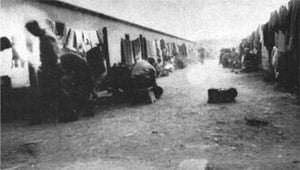 “Never was I listened to with such rapt attention and comprehension”. Messiaen’s comment on the first performance of the Quartet for the End of Time, given in the German prisoner-of-war camp at Görlitz, Poland in 1941.

It was interesting to compare those reportedly cramped, sub-zero conditions with the rather warmer and distinctly airy Royal Albert Hall, though the two performances shared an attentive audience – so much so that as Thomas Larcher sounded the final, ethereal bell-stroke high on the piano register there was a pause of fully one minute before applause began. 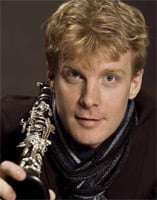 That can be taken as an accurate measure of the impact of this performance, a highly concentrated reading from four extremely accomplished musicians that avoided imposing too heavy a texture on the music. Further to that, when any of the quartet were tacet for a movement, they were themselves extremely attentive listeners.

This was particularly the case in Martin Fröst’s ‘Abîme des oiseaux’, the clarinettist’s total control of the notes quite extraordinary. Just as captivating was his use of silence and dynamic range, so that when his pianissimo notes started to crescendo they did so from a barely perceptible quiet. His fortissimo notes, meanwhile, were well chosen and fully expressive. 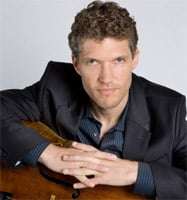 Inevitably the big acoustic did mar some of attention to detail, and ‘Liturgie de Cristal’ became something of an exotic pool of sound as a result. Yet that was not unidiomatic, for as the calculated piano loops of Larcher and Matthew Barley orbited the outer reaches of the piece, the birdsong of Fröst and Marwood, though languid, was characterful.

Ensemble in the ‘Danse de la Fureur’ was tight, but again this was lost a little to the acoustic. More forceful were the outer reaches of ‘Vocalise pour l’ange qui annonce la fin du temps’, cleanly contrasted with the long breathed, tranquil phrasing in between.

In the solo, transcendental movements for cello and violin exactly the right mood was cast, the stage bathed in a golden glow. Larcher was a most sensitive partner for the stringed instruments here, the rhythmic lynchpin but with the bell sounds of the piano coming as if from afar. It would have been all too easy for him to impose the big chords of the ‘Liturgie de Cristal’; that he refrained from doing so illustrated the careful thoughts behind this performance.

The audience was a plentiful one for a late-night Prom, and the musicians’ decision to opt for a radiant interpretation, light on texture, offered a timely contrast to the expansive orchestration of the Turangalîla Symphony two nights earlier or the sheer scale of the upcoming “Saint François d’Asisse”, thus refuting the suggestion that Messiaen could only write to excess.