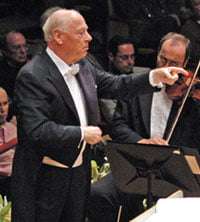 I have now heard Bernard Haitink conduct Bruckner’s Eighth Symphony in London four times in as many decades (with the London Philharmonic, Vienna Philharmonic, and twice with the Concertgebouw). It would be unrealistic to expect major changes to the broad contours of his interpretation (Haitink is the most consistent of guides). However, on this occasion, there was one interesting departure from his previous performances (and recordings) of this work, namely the use of Leopold Nowak’s edition rather than the one habitually favoured by Haitink, that by Robert Haas.

This is an ongoing debate amongst Brucknerians as to which edition is preferable; some conductors, such as Horenstein, have used both (recording Nowak when new but returning to Haas in later concert performances). As a result of Hermann Levi’s negative reaction to Bruckner’s original score of 1887 the composer revised the work, making major changes to the end of the first movement and composing a new trio for the scherzo, and also making cuts to the Adagio and finale. When he came to make his edition, of the 1890 version, Haas felt that the cuts were damaging and had been made by Bruckner under duress, effectively conflating the 1887 and 1890 versions. Later, Leopold Nowak, found Haas’s procedure questionable on the grounds that different sources “according to the principles of a critical complete edition can never be intermingled”. 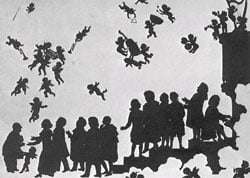 However, to quote from Deryck Cooke’s highly perceptive leaflet “The Bruckner Problem Simplified” (1975), “Nowak may have musicological rectitude on his side, but this is a unique case, in which human ethics play at least as large a part as the musicological variety” and “Haas’s conjectural restoration of what Bruckner’s own revision would probably have been, if he had been left to himself, could be regarded as the setting right of a wrong”. I am firmly with Cooke on this one. Haas’s fuller version makes better musical – if not musicological – sense. However, many distinguished Brucknerians – Giulini, for example – have performed Nowak. And now Haitink.

If Nowak is to be performed, Haitink and the Royal Concertgebouw made the very best case for it. The orchestra’s Bruckner tradition predates Haitink – Eduard van Beinum made notable recordings of the last three symphonies in the 1950s – and, almost intuitively, the Orchestra brings to this music a blend and a balance that has an unostentatious rightness and never draws attention to itself. Indeed, to such an extent was this a ‘corporate’ achievement – solid dark-mahogany strings of remarkable amplitude, brass deeply embedded in the textures, a distinctive and finely honed woodwind choir – that it would be invidious to single out any individual player. Besides the orchestra itself, the other hero of this evening was the Royal Albert Hall itself – Bruckner himself performed here, improvising on the then new organ – and is near-ideal for Bruckner, the cut-off from trumpets and horns at the first movement’s final climax hanging resplendently in the air for several seconds.

This was an interpretation that grew steadily in stature as it progressed. Whilst there may have been bleaker, more powerful accounts of the first movement, the scherzo moved forward swiftly with a muscular driving Schwung, the trio a miracle of dovetailing and – especially when the three harps finally entered – of undiluted poetry. In the Adagio the understated radiance of the string sound at the opening meant that the Wagner tubas’ initial piano entries registered with rare gravity; as the movement progresses to its long delayed climactic twin peaks (marked by two cymbal crashes), so its textures become ever richer and perhaps the most remarkable aspect of this reading was the extent to which these complexities had been so completely assimilated that the whole huge edifice moved forward with a transparency and naturalness one might have expected from a string quartet rather than an orchestra of roughly 110.

The finale can pose problems for its interpreters, frequently running out of momentum and losing its way once the splendour of its initial gesture has subsided. Hugely to Haitink’s credit, he was able to sustain a wide variety of tempos – the marching string unisons were taken at a relaxed pace, the subsequent pauses precisely calibrated – without losing momentum. Consequently, those sudden juxtapositions and changes of direction which so frequently sap the movement’s energy had exactly the opposite effect, all roads leading inexorably to that moment of frisson as the most imposing of all Bruckner’s codas reared gigantically out of the mists, the apotheosis achieved with minimal fuss and maximum power.