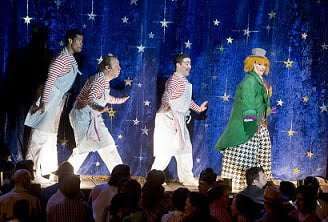 Probably the best-known opera double-bill, “Cav and Pag” provide a heady mix of post-Puccini verismo (realistic) dramas that take place in Sicilian and Italian country communities. Both operas are just over an hour long and each has famous arias. Cavalleria rusticana, by Mascagni, was written for a competition sponsored by the Milanese publisher Edoardo Sonzogno. It was an immediate success and has been loved ever since. The work is based on a popular novella and play written by poet Giovanni Verga.
Pagliacci, a two-Act opera with a prologue, was premiered two years later in 1892, and although less of critical success has likewise remained well-liked. Like Mascagni, Leoncavallo is really only known by this work, although he too wrote many operas. Pagliacci holds two ‘firsts’, being the first opera to be recorded in its entirety and also the first filmed complete. The two works were first staged together by the Metropolitan Opera in New York in 1893.

Cavalleria rusticana (Rustic chivalry) is set in a Sicilian village on Easter day. Turiddu was once engaged to Lola, who has now married the carter Alfio. He has since seduced the unmarried Santuzza, but then resumed his relationship with Lola. Santuzza has seen him loitering around Alfio’s house when he is away and, tormented by jealousy, in her distress reveals to Alfio that his wife is having the affair. As the congregation emerges Turiddu invites them to drink in his tavern. Alfio declines, and bites Turiddu on the ear – a challenge to hand-to-hand combat. Drunken Turiddu bids a confused farewell to his mother and goes to the fields to fight. Santuzza and the women anxiously await news…
In the prologue of Pagliacci (Clowns) Tonio comes before the curtain to remind the audience that what they are seeing is fantasy and illusion, but also to prompt that the actors have feelings too and that the performance depicts the lives of real people. The curtain opens to reveal the town of Calabria on the Eve of the Assumption. A troupe of itinerant actors arrives in town and drums up support for their performance in the evening. As soon as they are unobserved their real personas and rivalries are revealed. The clown Canio is married to Nedda, who is also adored by Tonio whom she rejects cruelly. Nedda is having an extra-marital affair with Silvio, one of the young locals. Canio, who plays a foolish cuckolded husband in the play, reveals that he would not tolerate such immorality in his own life. Tonio overhears Nedda planning an elopement with Silvio and informs Canio. Enraged he threatens Nedda but is called for the performance. The play commences. The comedy depicts the situation that is going on in reality … with tragic results.

Both scores are unmistakably Italianate and lyrical, with fiery moments. Cavalleria rusticana has some great set pieces – notably the ‘Easter hymn’, and the ‘Intermezzo’. Santuzza has a famous aria near the start, ‘Voi lo sapete’, where she pours out her heart to Turiddu’s mother. Turiddu is sung by the tenor, as the romantic lover, the unthinking cad and finally as a desperate, hunted man. The baritone role of Alfio gives short but thrilling opportunities for the singer, a macho first appearance and jealous eruption on learning his wife has been unfaithful.
The baritone singing Tonio in Pagliacci has the plum of the prologue to sing – needing charisma and a ringing top to the voice for ‘Si può … si può’. The opera’s most-famous aria is ‘Vesti la giubba’ (On with the motley), sung by Canio, and although short it is central to any performance. The soprano singing Nedda has a short scena where she projects her anxieties and her longing to be free like the birds.

The production being transmitted is a new one by David McVicar. Argentinean tenor Marcelo Álvarez takes on the roles of Turiddu and Tonio, which his dramatic dark-hued tenor would seem well suited. George Gagnidze is Alfio and Tonio. Eva-Maria Westbroek’s vocal richness and sure dramatic abilities should give us a Santuzza of complexity, whilst Patricia Racette’s bright and mettlesome soprano should be displayed to advantage as Nedda. The Metropolitan Opera Orchestra will be conducted by Fabio Luisi – there can be few conductors with better credentials for these action-packed pieces.

If you are in New York City then the matinee is live at the Met itself, midday-30, on Saturday April 25, and beginning at 5.30 p.m. in UK cinemas.