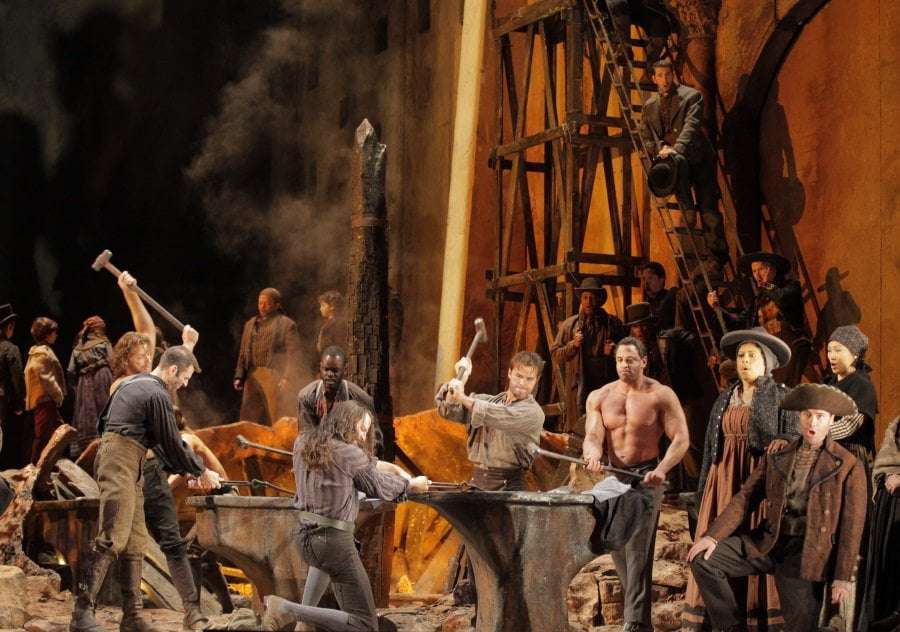 Who wrote it?
Il trovatore is one of three operas that mark Giuseppe Verdi’s departure from his “galley years” where he was developing his craft and style to a more mature and individual compositional voice. The passage to the stage of the other two operas, Rigoletto and La traviata, were not without censorship problems, but with Il trovatore Verdi had a runaway and continuing success.
The opera, based on an 1836 play El trovador by Antonio Garcia Gutiérrez, is to a libretto by Salvatore Cammarano. It has a convoluted, melodramatic and barely credible plot, but is full of great situations and spectacles. The music is earthy, tuneful and thrilling in equal measure – provided the principal protagonists are well cast.

What’s it all about?
The opera is set in Spain in the 15th-century during a period of civil war. As the curtain opens, Ferrando, an elderly military aide to the Count di Luna, regales the soldiers of the night-watch with the grisly background story from the Count’s past. He tells how a young gypsy, daughter of a witch who was burned at the stake abducted the younger infant brother of the Count. The Count is bent on finding this woman to mete out justice, for the charred remains of a baby were found in the embers of the witch’s execution pyre.
The Count is also in amorous pursuit of the noblewoman Leonora. She has fallen in love with a rebel knight, Manrico, who leads a group of outcast soldiers against the Count’s forces. Manrico serenades Leonora from her garden and as she rushes to meet him she mistakenly falls into the arms of Count Luna who is waiting in the shadows. She declares her love for Manrico, infuriating the Count and provoking the two men to rush off to duel for her love. 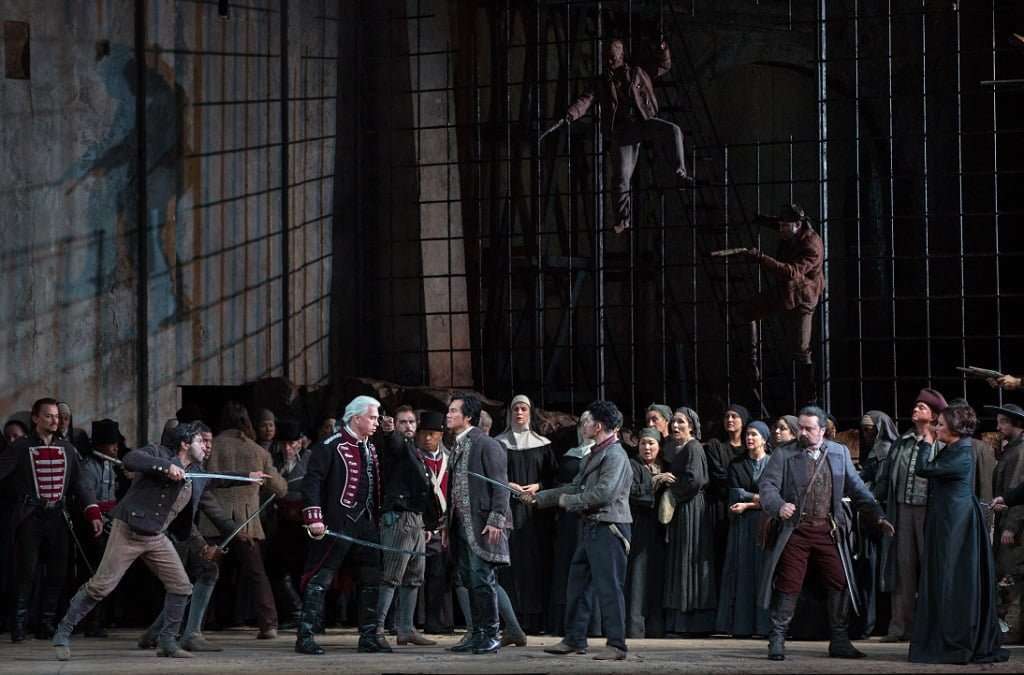 Act Two sees Manrico recovering from wounds he received in the duel under the care of his gypsy mother Azucena. She sings obsessively to herself of the fiery death of her mother at the hands of Count Luna’s father and of how in her distress she sacrificed her own child in a fire rather than the child of her enemy. This causes Manrico to question his parentage, but she attempts to reassure him that he is indeed her son. In turn he explains to her how, despite having Count Luna at his mercy after the duel, he spared the Count’s life. News arrives that Leonora, believing Manrico dead, intends to enter a convent. As Leonora prepares to enter the cloister Luna attempts to abduct her, but Manrico and his forces arrive in the nick of time.
Azucena is captured by Luna’s soldiers. As she evasively answers questions Ferrando recognizes her as the gypsy the Count has been searching for and as being the mother of Manrico. She is imprisoned, pending execution at the stake. News of this interrupts the nuptials of Manrico and Leonore and he runs to save his mother, but is captured. Leonore bargains with the Count, offering her hand in marriage for Manrico’s life. The deal is agreed, although both intend to renege on their sides of the bargain.
Leonora is admitted to the prison cell where Manrico and Azucena are being held. She explains to Manrico how she has sacrificed her future happiness to secure his life. This arouses Manrico’s furious jealousy and he repudiates her faithlessness. She collapses and reveals she has taken deadly poison. Distraught, Manrico attempts to comfort her dying moments, but Luna enters and orders Manrico’s summary execution. As the final blow is dealt Azucena triumphantly reveals to the horrified Luna that he has in fact just executed his own brother. Her mother is avenged. 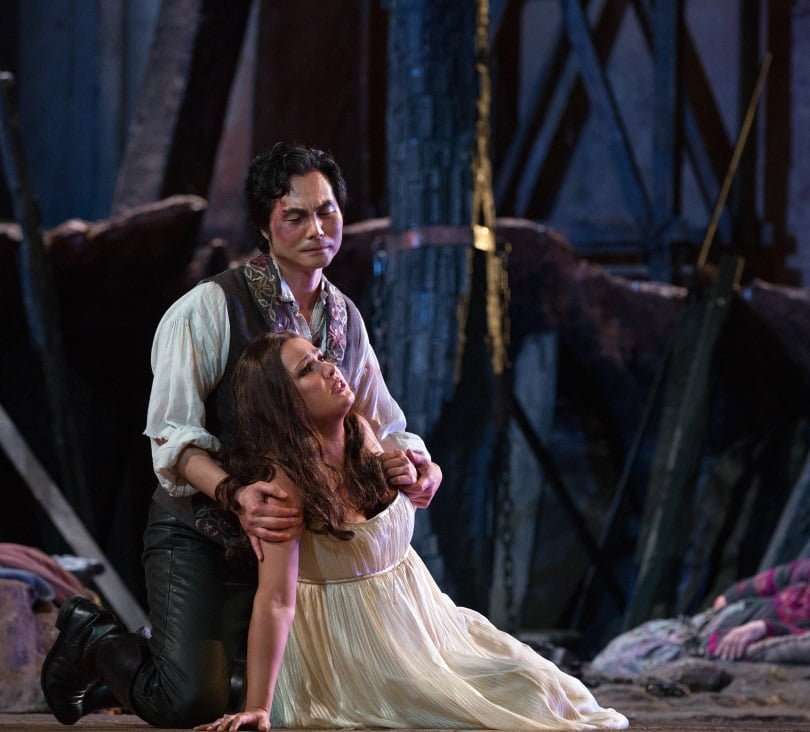 Look out for…
Il trovatore is full of vocal highlights. Each of the five principal singers has moments in the spotlight and a chance to demonstrate their technical prowess and vocal beauty in both lyrical and dramatic music. The chorus also has a pivotal role playing soldiers, gypsies (including the famous ‘Anvil Chorus’) and nuns. Verdi’s music has a thrusting and energetic quality that sweeps the spectator along and there are great duets and trios.
The role of Leonora requires a creamy lyric-dramatic soprano with the ability to sing some tricky and florid music. Manrico is a heroic tenor role, whose most famous utterance is the rabble-rousing ‘Di quella pira’ with its interpolated, but nowadays obligatory, high Cs! Count Luna requires a suave and virile baritone. The most extraordinary role is that of Azucena which makes huge demands on the contralto who takes it on – she must have power at both ends of the extreme range of the part, and be able to dominate the stage vocally and theatrically.

Who’s in it?
The production being transmitted is directed by Sir David McVicar. It is sometimes said that Il trovatore requires the four best singers in the world; the Met seems to have secured as fine a line-up as one could hope for. Anna Netrebko tackles the role of Leonora, a part for which her glamour and her rich, agile voice would seem ideally suited. Manrico is sung by up-and-coming heroic tenor Yonghoon Lee, whilst veteran Verdi baritone Dmitri Hvorostovsky plays the Count – in his repertoire for many years. Bass Štefan Kocán sings the small but critical role of Ferrando. The world’s reigning Azucena, Dolora Zajick, reprises her famous portrayal of the gypsy – expect fire!
The Metropolitan Opera Orchestra is conducted by Marco Armiliato, a specialist in Italian opera.

When’s it on?
If you are in New York City then the matinee is live at the Met itself. Otherwise it is broadcast live to cinemas on Saturday October 3.