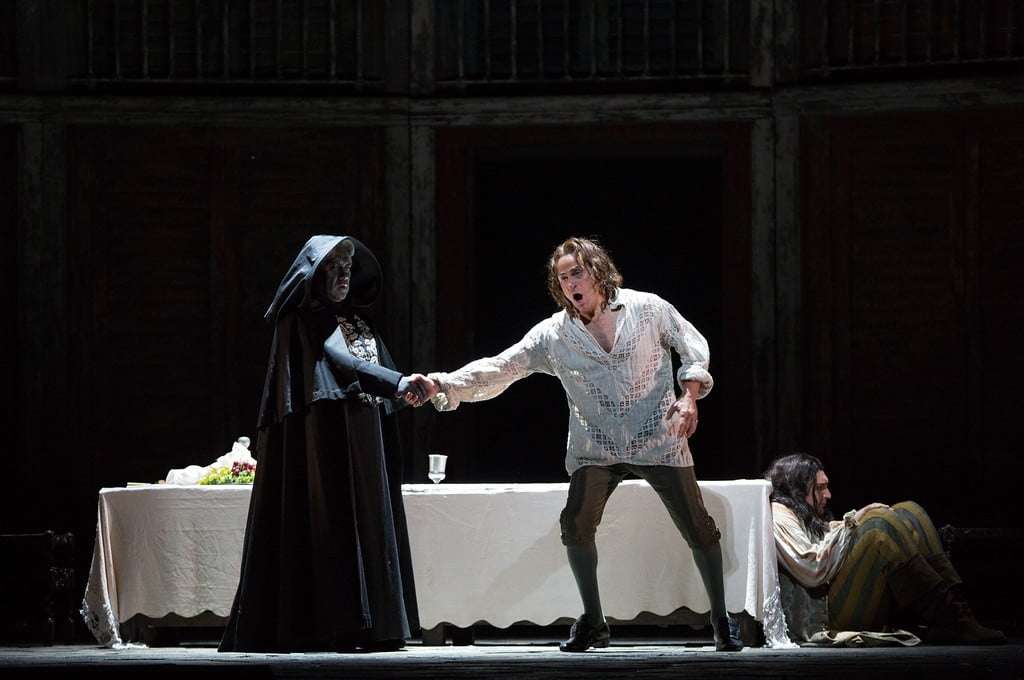 Who wrote it?
Don Giovanni is one of the best-loved operas by Mozart and one of three with librettos by Lorenzo Da Ponte (the others being Cosi fan tutte and Le nozze di Figaro). It was premiered in Prague in 1787, and there was a revision of the work for Vienna in 1788. It was promoted at the time as a dramma giocoso – in addition to the serious aspects there are intentional moments of comedy (even if modern-day directors frequently decide otherwise!). The opera shows Mozart at his boldest, and the principal roles have proved attractive to singers down the ages for the vocal and dramatic opportunities.

What’s it all about?
Da Ponte’s masterful libretto draws on the legendary figure of Don Juan. Don Giovanni is a nobleman who, as we learn from his much put-upon servant and sidekick Leporello, has crossed the world seducing women and leaving a trail of devastation. His past is soon to catch up with him!
As the curtain rises Leporello is keeping watch outside the house of a wealthy man, the Commendatore. Inside Don G is seducing his daughter Donna Anna – but she is putting up much resistance. As she flees her father confronts the disguised seducer, only to meet death at his hands. Returning with her fiancé Don Ottavio, Donna Anna finds the body. Having escaped Don G is relating the tale to Leporello when he senses another noble woman to woo. She is Donna Elvira, a former conquest, who has been pursuing him. With the aid of Leporello Don G gives her the slip, and then encounters a group of country folk on their way to a wedding.
The bride, Zerlina, is charmed that a nobleman has offered his congratulations, much to the chagrin of her betrothed, Masetto, who recognises Don Giovanni as a threat. Don G attempts to seduce Zerlina, but Donna Elvira arrives and prevents any further interaction. As he and Donna argue, Donna Anna and Don Ottavio arrive dressed in mourning. Condolences are offered, but something about Don G prompts Donna Anna to recognise her former assailant, and she reveals this – awkwardly – to Don Ottavio; the two plot to unmask him, with the aid of Donna Elvira. 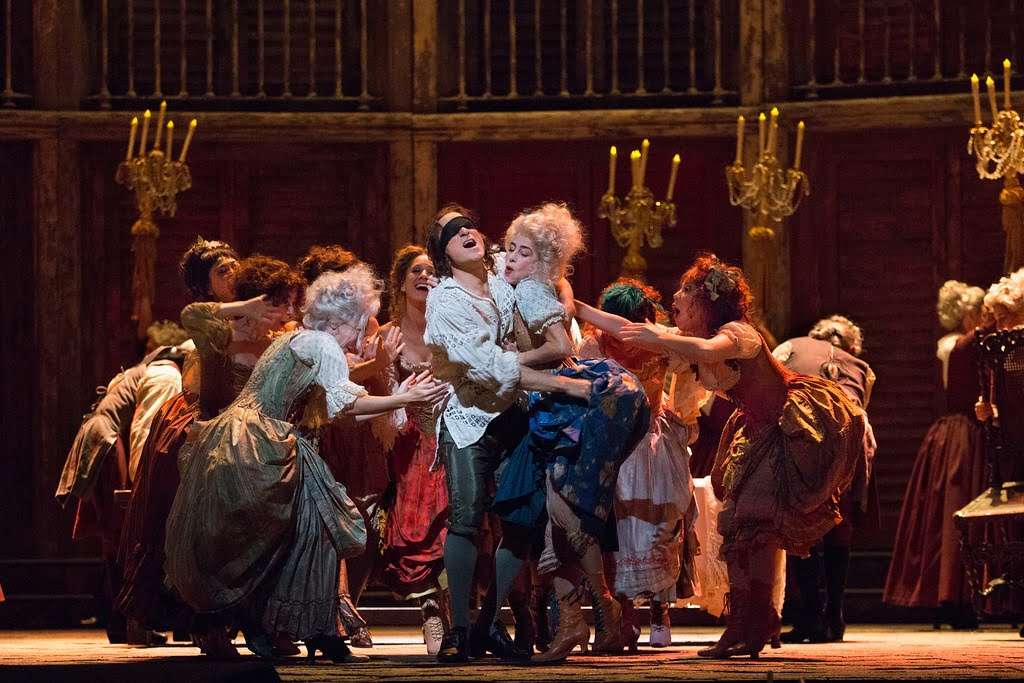 Don Giovanni hosts a party at his mansion to which all are invited and at which he plans to abduct Zerlina. Three masked revellers (we know who they are) appear and intervene at the critical moment – the Don and Leporello evade capture.
The second Act sees various strands of action. Don G is now after Donna Elvira’s maid, but this requires Leporello to distract the mistress by wooing her in the darkness whilst dressed as his master. He is captured. Masetto leads a band of friends to attack Giovanni, but ends up as the victim of his quarry. Zerlina nurses him to health. Donna Anna and Don Ottavio’s relationship is under strain and they try to patch things up, though she insists on a delay of marriage until she has fully mourned her father.
At night in a cemetery Giovanni and Leporello meet up. They notice the new statue of the Commendatore. Jokingly, Don Giovanni forces the terrified Leporello to invite the statue to dinner. It accepts! As Leporello prepares the feast he is teased by Don G. Donna Elvira arrives and tries to persuade Giovanni to change his lifestyle but is brushed aside. Then a knock is heard and the statue arrives… 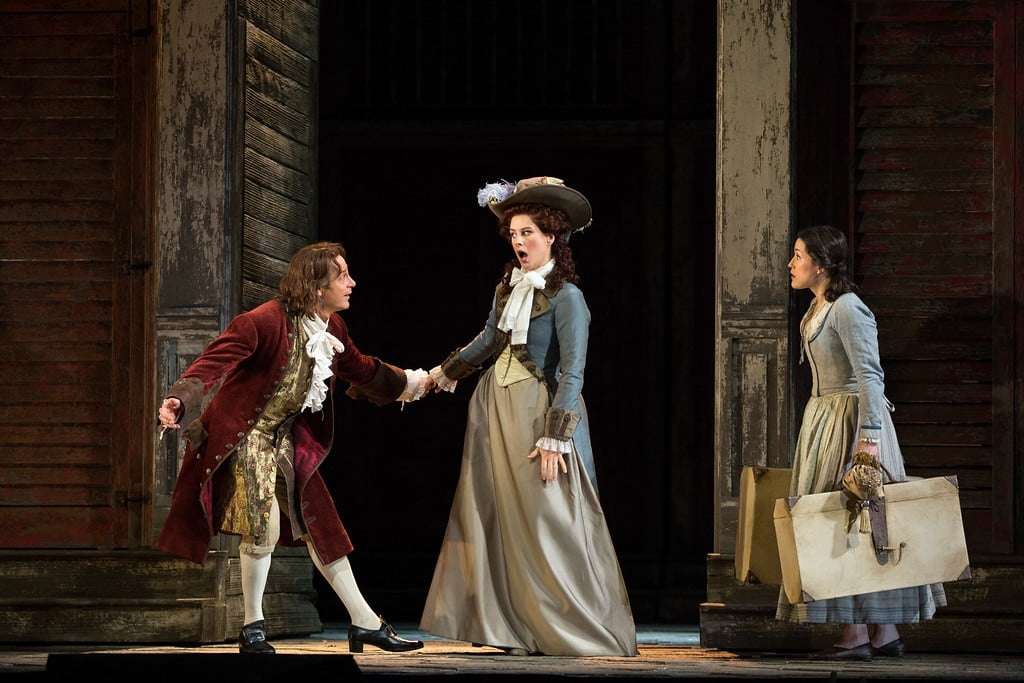 Mozart’s glorious score abounds in famous arias, duets and ensembles, with each of the principals getting their moments in the spotlight. Amongst these is Leporello’s ‘Catalogue’ aria in which he shocks Donna Elvira with the details of his master’s amorous conquests. There is also Giovanni’s sparkling ‘Champagne’ celebration, Donna Anna’s treacherously difficult ‘Non mi dir’, Don Ottavio’s two arias (one for Prague, one for Vienna, but now both usually performed), Zerlina’s ‘Batti, batti o bel Masetto’ and ‘Vedrai, carino’, the latter with its undulating cello accompaniment, and Donna Elvira’s ‘Mi tradi’.
The Finale of Act One is extraordinarily complex with two groups of musicians as well as the orchestra in the pit playing different dances in different time-signatures simultaneously. Mozart has fun in the dinner scene before the arrival of the Commendatore’s statue by quoting tunes from other operas familiar at the time. The forces of Hell are unleashed shortly thereafter!

Who’s in it?
The title role is sung by Simon Keenlyside, a part he is celebrated for. Leporello is Czech baritone Adam Plachetka. The three ladies are sung by Hibla Gerzmava (Donna Anna), Malin Byström (Donna Elvira) and Serena Malfi (Zerlina). Gerzmava’s dark voice should be ideal for her role whilst Byström’s lighter yet still dramatic voice should provide great contrast for the erratic Elvira!
Matthew Rose is luxury casting for Masetto, and Paul Appleby sings Don Ottavio. Add Kwangchul Youn’s sonorous Wagnerian bass as the Commendatore and the omens are good! Fabio Luisi conducts the Metropolitan Opera Orchestra in Michael Grandage’s staging.

When’s it on?
If you are in New York City then the matinee is live at the Met itself. Otherwise it is broadcast to cinemas on Saturday October 22.