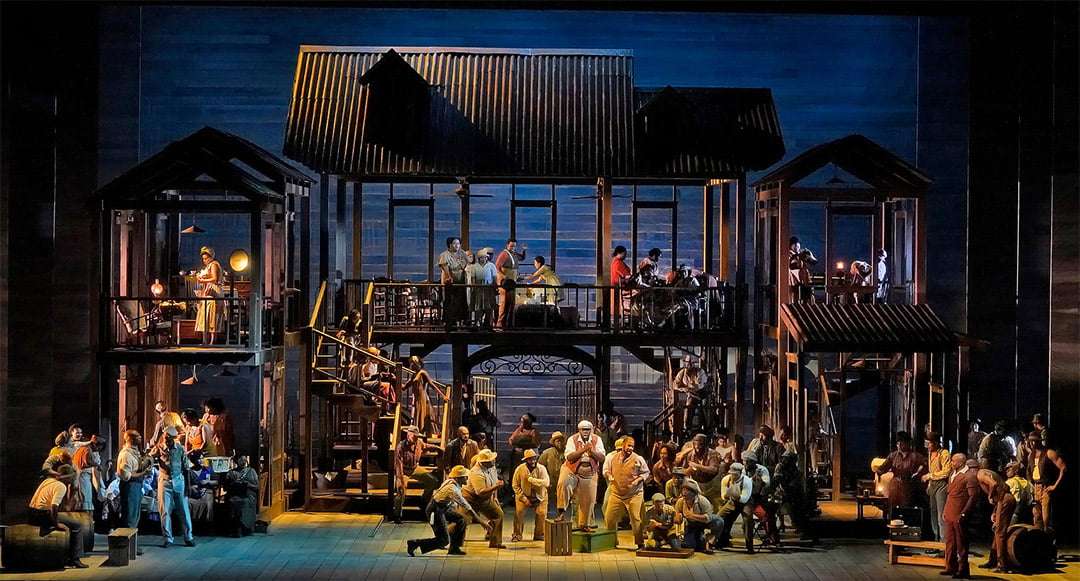 Who wrote it?
George Gershwin composed Porgy and Bess, premiered in 1935, specifically for operatic treatment, although it has been frequently staged by smaller theatres and music-theatre companies more as a ‘classic’ musical type of presentation throughout its history. That said, it easily stands in the listings of some of the most original and stageworthy 20th-century operas, one almost without precedent in that it requires a cast largely comprised of black singers (Scott Joplin’s Treemonisha is another such example that had its original staging in 1915). Given that the first black singer to appear at The Met (the old house), the contralto Marian Anderson, only did so in January 1955, the work has seen relatively few stagings by the company; the first was in 1985. The libretto, written by Edwin DuBose Heyward and the composer’s brother Ira Gershwin, was based on Heyward’s 1925 novel ‘Porgy’ and his own subsequent theatrical version of it.
George Gershwin first encountered the novel shortly after it was published and approached Heyward about rights shortly afterwards – but they only started collaboration on the work in the 18 months before the premiere. Porgy and Bess has not been without controversy with some early commentators and artists, expressing opinions that the impoverished African-American slum community depicted, with its heady mix of religion, violence, drug-dealing, and disabled characters was negatively stereotypical, not least as it was composed by a white American composer who did not incorporate original folk music material but developed his own jazz-influenced folk-music inspired style for the work. During the Civil Rights and Black Power movements from the 1950-1970s it fared particularly badly owing to this. Recently, there has been a trend to return the work to its creators’ original ‘Grand Opera’ concept, finding it new admirers and devotees. The ear-catching score contains many ‘numbers’ that have a semi- independent life of their own. 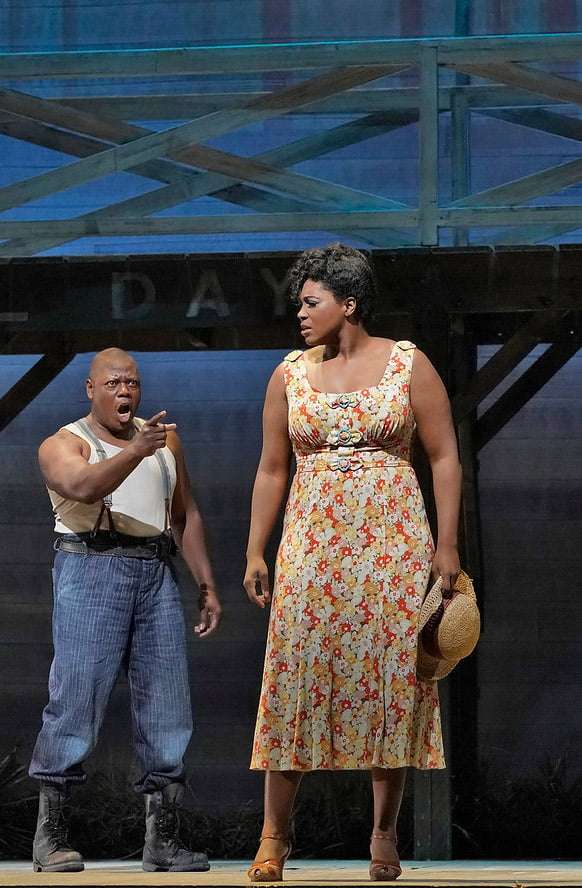 The action centres around Catfish Row, a poor tenement community set near the waterfront of Charleston, South Carolina in the early 20th century. As the curtain rises it is early Saturday evening, and Clara is singing a lullaby ‘ Summertime’ to her baby. Slowly, men return from work and prepare to spend the evening playing dice. Serena tries to prevent her husband, Robbins, from participating. Others gradually join the game, including Clara’s husband Jake, and the disabled beggar man Porgy. The hulky Crown and his girlfriend Bess arrive; they are both largely shunned though they are sold some drugs ‘Happy Dust’ by Sporting-life – a local dealer. The men play and drink until only Robbins and Crown are left in the game. When Robbins wins, Crown’s anger flares, and they start to fight. In the brawl Crown kills Robbins with a cotton hook and flees, telling Bess he will return for her. She rejects advances from Sporting Life and as the police arrive is taken in by Porgy.
The community gather to mourn Robbins and to donate money to Serena for his burial. Bess tries to contribute, and is refused until Porgy announces they are now together. The police arrive and arrest Peter who stated he witnessed Crown murdering Robbins. In the Act Two, several weeks later, Porgy sings of his new-found happiness whilst the community gather to go on a church-organised picnic to Kittiwah island. Maria catches Sporting Life dealing drugs and threatens him with a knife. A pseudo lawyer tricks Porgy into buying a divorce for Bess from Crown. News of Peter’s imminent release is heard, but then a black buzzard flies over – a bad omen. Sporting Life again tries to sell his wares to Bess, but, Porgy intervenes, and the couple declare their growing love. Bess leaves for the picnic, watched by Porgy who remains behind.
On Kittiwah Island the picnic revels are ending. On her way back to the boat Bess encounters Crown, who has been hiding on the island. He reacts angrily when Bess tells him of her new partnership, physically prevents her from leaving, and drags her into the jungle. A few weeks later she has escaped and is back at Catfish Row in Porgy’s hut but suffering from a severe fever. The community, which has finally accepted her, is praying for her. Porgy reassures her that, although he knows she had seen Crown, he will protect her. The hurricane warning bell tolls – some of the men are still out on the water. As the residents pray for salvation from the storm Crown suddenly enters and taunts them. Jake’s upturned boat is seen through the window. Clara rushes out into the storm and Bess asks that a man go and help her. Ridiculing Porgy’s inability to help, Crown does so.
In the final Act, prayers and further burials are taking place, including that of Jake. As night falls Crown slips in to try and abduct Bess, but Porgy is waiting for him and dispatches him. The community deny knowledge of Crown’s killer when the police appear. The detective needs a witness who can identify the body, and drags Porgy away for that purpose. Bess is helpless, takes some ‘happy dust’, and leaves for New York with the opportunistic Sporting Life. A week later Porgy returns following release. He has won money from his fellow prisoners. He learns of Bess’s departure, and determines to follow and find her. He hitches himself to his goat-cart and starts his journey. 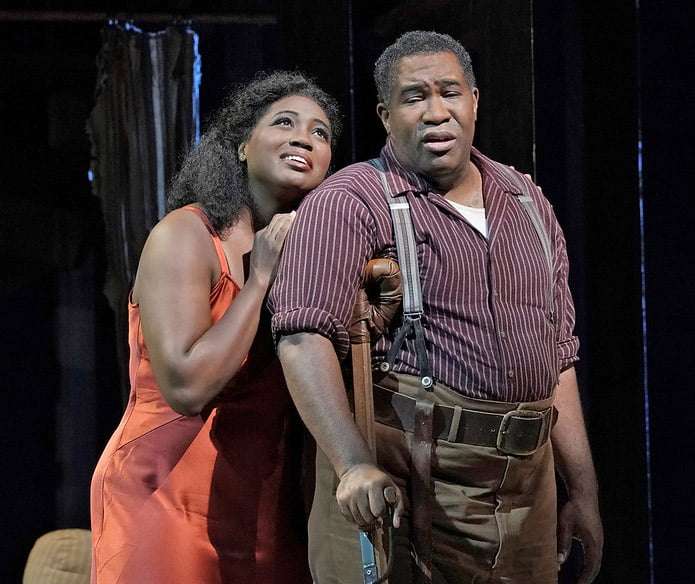 Listen out for…
Known for his great songs and his New-York jazz-inspired orchestral music (Rhapsody in Blue etc), this is another Gershwin score brimming with vitality, with original-and-catchy tunes allied to some great word-setting. There are elements of spirituals, street, and work songs that are interspersed with more conventional operatic fare, but with an underlying cohesive quality. Gershwin also uses motifs to musically identify some of the protagonists, places and even ‘happy dust’. Songs like ‘Summertime’ (heard sung by both Clara and Bess) and ‘I got plenty o’ nuttin’’ have become justly famous, as has the great Porgy and Bess duet in the Act Two: ‘Bess, you is my woman now’. Some of the spirituals, such as ‘Gone, gone, gone’, have a raw power, and some of the scenes, particularly the later Crown-and-Bess encounter, have full operatic force.

Who is in it?
The Met has assembled a great cast for the relay performance, with soprano Angel Blue singing the role of Bess, and baritone Eric Owens singing Porgy. Both have beautiful powerful voices, and dramatic capability to bring these roles to vivid life. Crown is sung by Alfred Walker, and there’s a fine ensemble of ladies including Golda Schultz as Clara, Latonia Moore as Serena, and the ever-characterful Denyce Graves as Maria. Frederick Ballentine plays the disreputable Sporting Life. Conducting the performance is David Robertson, and the staging is by James Robinson in the beautiful sets designed by Michael Yeargan.

When’s it on?
If you are in New York City then the matinee is live at The Met itself. Otherwise it is broadcast to cinemas on February 1st.