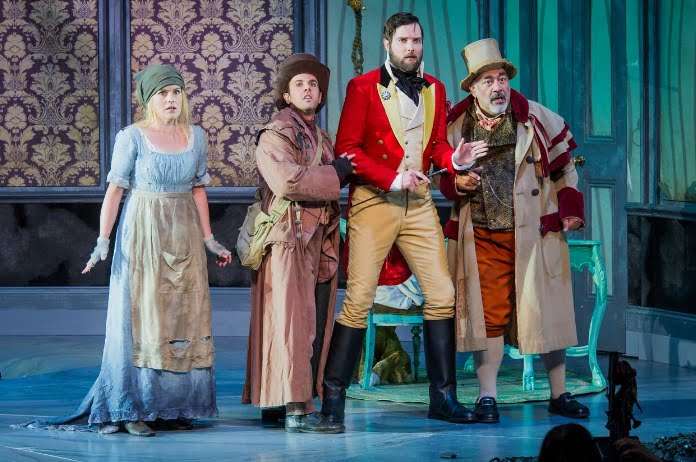 With its wide fixed stage and limited capability for technical trickery Opera Holland Park seems an unlikely venue for an essentially intimate opera that in today’s productions is usually reliant on a bit of theatrical wizardry. Yet by means of a cleverly lit, permanent yet adaptable set – that is able to quickly accommodate the settings of Don Magnifico’s crumbling mansion and the opulence of the prince’s palace coupled with some inventive choreography – OHP has, in Oliver Platt’s likeable staging, quelled any doubts about a potential mismatch.

If confining Angelina to one far side of the stage occasionally produced some odd disjoints in ensemble early on, these were soon overcome. Dane Lam led the City of London Sinfonia in a lively account of the score, eschewing an over-romantic rendition in favour of a leaner, commendably precise reading. The contribution of the continuo player Stuart Wild deserves mention; here, presumably for reasons of audibility, an (electric?) piano was used to good effect. Additionally the input from percussion was nicely dry, and there were super woodwind solos.

OHP has fielded a balanced cast. In the title role Victoria Simmonds exhibits considerable vocal dexterity in an appealing and almost unassuming way. From a dramatic perspective she is sympathetic without overdoing the pathos. Her final scene cast just the right notes dramatically – and there are a lot of them musically! The two squabbling sisters are sung by Fleur de Bray and Heather Lowe, the latter in particular making a strong impression with her warm yet penetrating mezzo. Nicholas Lester’s Dandini is another finely judged portrayal. His height allows him to dominate the stage easily, as this character should, and he made direct contact with the audience. His ‘asides’ were delivered with point and his singing as rounded as his coloratura was impressive. 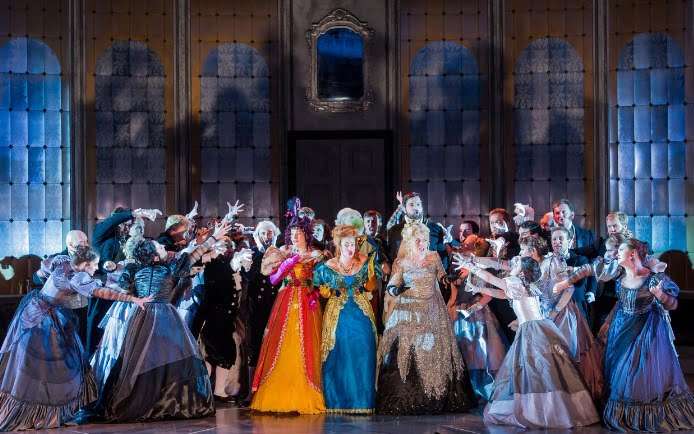 Nico Darmanin impressed more as Prince Ramiro than he did as Count Almaviva in the recent Welsh National Opera Barber of Seville. Here his facility to alternate between Ramiro’s amorous sensitivity, his metallic and fiery outbursts and the earnest and showy moments were impressive; we have another Rossini high-tenor of great ability. Barnaby Rea showed a voice of huge potential as Alidoro. In the buffo bass role, always important in a Rossini comedy, was Jonathan Veira’s strong Don Magnifico. He has great stage presence, knows how to play-off his colleagues, and was excellent in the patter-song moments.

The OHP Chorus was also in fine fettle, and also required to undertake some complex choreography – not least in the ballroom scene at the close of the first Act where there is much stylised dancing – and also crucial to scene-changes and especially to the coach accident in the storm of Act Two, which is deftly handled.

There are other nice directorial touches and visual gags – I particularly liked the comedic value realised in Angelina’s tightening of her sisters’ corsets and bodices. This is a Cinderella well worth catching.