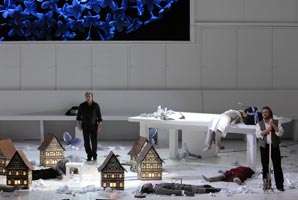 This was the second performance of a new production of Wagner’s sunniest work staged at the Semperoper in Dresden. The premiere had evidently been beset by a cast change during the performance. On paper the cast looked to be a strong one and expectations were therefore quite high, so it is sad to report that they were disappointed.It was not so much the fault of the performers, but rather of the stage environment and a production full of inanities. It is hard to recall an occasion when a cast has arrived for the final curtain call of a long evening looking quite so glum and dejected, nor an occasion when Wagner’s most accessible and pacy score felt quite so long. Again, this was not the fault of the conductor Fabio Luisi, the Semperoper’s current Music Director, but that of the staging, which seemed deliberately to militate against what was emerging from the pit. So, before attending to musical matters it might be better to dispense with the production.

The setting was one of those big white box sets, which was dominated by some oversized furniture – in particular a large white chair and large white table. For the initial scene, which takes place inside the Katharinenkirche, there was a stained glass window to one side, but the chorus was revealed standing in a sunken area so that only the upper halves of their bodies were visible from the Stalls level. Eva was in their midst, perched on the big white chair. It soon became clear that much of the singing was to hail from this sunken area, which must have made vocal projection difficult while obscuring the singers from the sight of much of the audience. When the Mastersingers appeared they ended up confined to the margins of the stage, seated around the huge white tables, again meaning that unless one was seated in the middle part of the auditorium one could not see a third of them. There were some model mediaeval houses dotted around the place, sometimes on shelves on the back wall, and in later acts these were strewn around the stage.

For the street scene in Act Two the setting for the previous act was essentially turned 180 degrees, so the lights were on the floor. I could not see if the stained glass window had turned or not. The furniture had not turned, and the large table now supported a larger scale model of a house (Pogner’s), through which the protagonists emerged occasionally or poked their heads trough the small windows.

Act Three brought us back to the church scene orientation again. An abstract presentation would be fine, but the direction seldom illuminated the plot, and one wondered whether a newcomer to the opera would have made much of it. The director had ostensibly decided to focus his production on the theme of order versus chaos, unarguably one of the facets of the work. The implication appeared to be that the Burgers of Nuremberg had ordered their society to a set of very strict rules, encompassing the composing of songs, to the extent that there was little freedom of any kind.

Enter Walther von Stolzing from in front of the curtain towards the end of the ‘Prelude’ to disrupt this order (contrary to what the text says, as Pogner indicates in his words that Stolzing has been in town for a brief while at least before the start of the opera). What follows is essentially an attempt by the forces of order, the Mastersingers and a programmed society (the chorus), to re-establish a structure. Thus the opera becomes less a genial comedy of a world-wise older man helping young lovers to make their lives together in opposition to his rather more conservative contemporaries, but more a conflict were in the end there are victims. At the end of this staging the liberal Eva and Walther are cast out in front of the curtain, Hans Sachs’s final peroration becomes a widely projected call to conform, and Beckmesser, who has failed to uphold the order, dies a suicide. 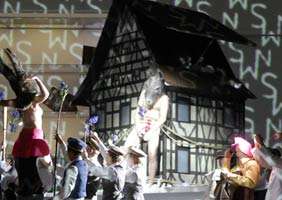 Add to this some fairly trite directorial tics and heavy overemphasis of ideas – examples being to have Sachs and Beckmesser don voice-muffling headmasks of a bull and a donkey as in “A Midsummer Night’s Dream” during their interplay in Act Two, the nightmarish riot of the end of that act, the endless video projections showing mathematical realisations of a song’s structure – and one soon realized that much of the charm and atmosphere of the work was fatally lacking. If you decided to stay the course you knew you were in for the long haul. Many did not.

From the singers there was much to enjoy, even if one doubted any of them could be delivering of their absolute best under the circumstances. Alan Titus’s Sachs was rather a puzzle. He has the vocal heft for the part, a nice sense of line, good diction, and the stamina to last the course. But this Sachs was lacking in geniality, theatrical spontaneity and certainly for the first two acts he seriously lacked any presence. This left a big hole in the structure of the drama. Although Titus has never been the most demonstrative of actors, one had expected more.

Bo Skovhus as Beckmesser was an instance where a little less would have meant so much more. That he sang the part well and with a Lieder singer’s care for words almost goes without saying. Alas, his characterization was over-fussy, pernickety and ultimately tiresomely obvious. 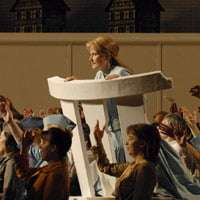 One of the most enjoyable performances of the evening was Hans-Peter König’s Pogner. Here is a wonderful rounded and resonant bass voice in its prime and with a big natural stage personality to match. Alone of the principals König managed to establish a depth of character, charm and to override the staging. Also excellent vocally was the Walther von Stolzing of Raymond Very. The original singer announced for the role was Endrik Wottrich, who had then been replaced before the premiere by Robert Dean Smith. Very was due to take over the part later in the run. However, Smith had run into vocal difficulties during the premiere and Very had taken over mid-performance, and was now standing in for his ill colleague. He sang lyrically throughout, and, despite the fact that every time his character sang the director provided distracting video projections to undermine him, he held his ground. The staging did not give him much else to do other than mope around in a coat looking a bit glum, but he did maintain interest (and sympathy).

Eva was the Finnish soprano Camilla Nylund. She has a pleasant voice, although perhaps one that is a little too light and slightly brittle to really deliver the big moments of the role. The start of the quintet was well controlled but the end a little strenuous, and her ‘O Sachs, mein Freund’ slightly lacking in variation. However, she managed to make more of the asides in Act Two than many interpreters of the part.

The rich-voiced Christa Mayer managed to make something of Magdalene and emerged as another personality like Hans-Peter König. David, beset by an unfortunate costume and an appearance that made him look like Harry Potter come to Nuremberg, was decently sung by Oliver Ringelhahn. The director had given his character rather more focus than many of the rest of the cast and he certainly delivered the goods, even if his David was rather unsmiling. Of the smaller parts, Matthias Henneberg’s pompous Kothner deserves a mention. The chorus was on fine form.

Probably the reason for staying the course was to hear Staatskapelle Dresden, the resident orchestra of the Semperoper. Even if Luisi’s reading was sometimes lacking in dramatic sweep and consistency of tempo one could only marvel at the clarity of the orchestral sound and detail. Time and again one noticed aspects of the orchestration and particularly of counterpoint that had not registered before. The off-stage brass effects were well handled, and the delectable woodwind sound was a pleasure to hear. The strings sounded rich but clean.

The building has a famously generous acoustic and this was evident here – perhaps the best moment of all was the sustained Prelude to Act Three. Without any visual distractions one could enjoy the lush playing of the brass in their chorale passages and the complex interplay of the other sections.

So not all was lost, but sadly Guth’s production would be a severe deterrent to my seeing this work in Dresden again. After the hostile critical reaction to Katarina Wagner’s Bayreuth production this summer and now to Guth’s Dresden staging it seems that Germany may not be the best place for Wagnerians to see “Die Meistersinger” for a while.