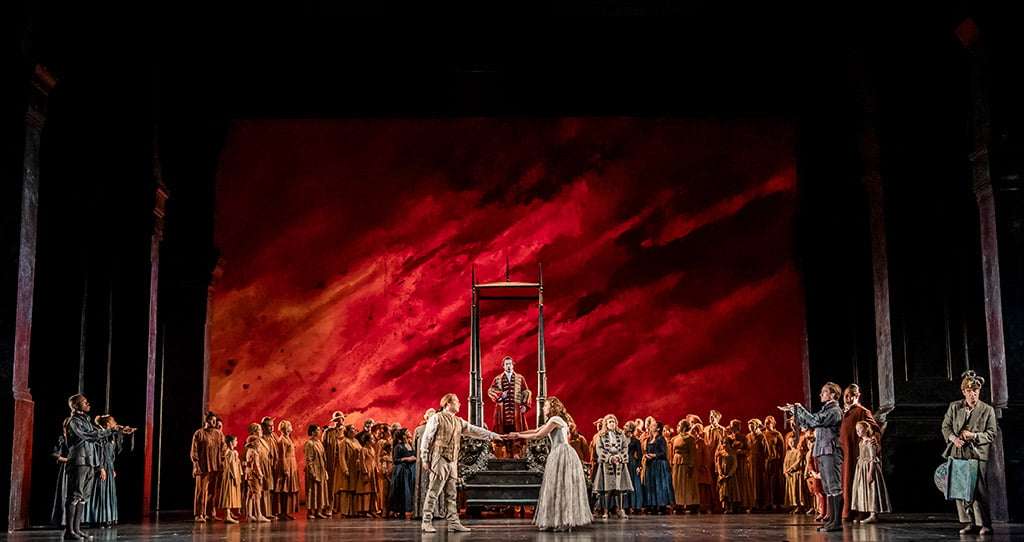 Shakespeare knew a thing or two about constructing a successful piece of theatrical entertainment. From the groundlings who were served up thigh-slapping comic relief to the aesthetes who craved intellectual stimulation, there was something for everybody. Even if he never managed to please all of the people all of the time. In The Magic Flute Mozart attempts to do much the same, the music underpinning and complementing what is frankly a hotchpot of incongruous ideas and improbabilities, held together by creaky dialogue. It would be a minor miracle if modern directors made perfect sense of it all.

In this revival of the original David McVicar production under the direction of Bárbara Lluch, there is always a feeling of too many question marks left hanging in the air. In an opera in which light (and behind it stands the idea of Enlightenment) ultimately overcomes darkness (everything that is ranged against Reason), lighting is ultimately key. All very well to have a group of maidens carrying hand-sized orbs of light into the auditorium shortly after the overture got underway, but there were too few of them and they failed to stay the course. An absence of light and preponderance of gloom, accentuated by the charcoal-grey sets, could just as easily have prepared the ground for a Gothic horror story. Even in Act Two, a couple of burning torches and a single candlestick suggested something medieval. There are no references to the Sevenfold Circle of the Sun, to which the Queen of the Night ultimately relinquishes her power and which Sarastro inhabits as his spiritual domain. And where are his seals of state, the insignias of his legitimacy? At the very end, when Tamino has come through all the tests of his inner resolve, I would have expected the stage to be flooded in light. A yellow globe simulating sunrise and cascades of glitter from on high are a poor substitute for a properly ecstatic release. 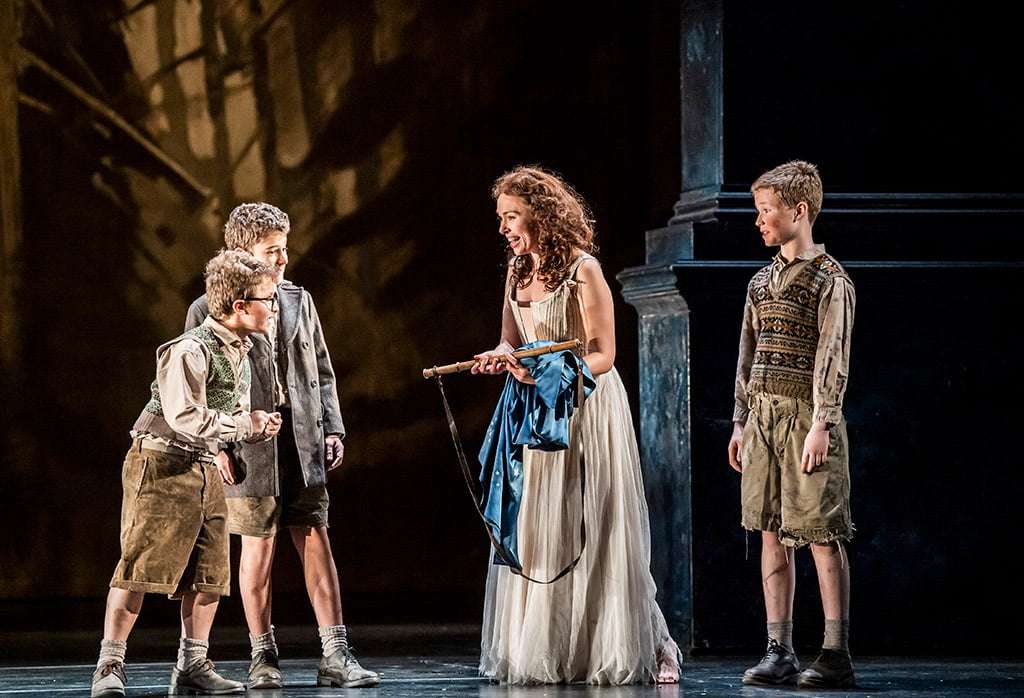 Mozart specifies that the action takes place in Ancient Egypt. Apart from a video projection of the Rosetta Stone towards the end, nothing remotely Levantine or African is on display, and even Monostatos is deprived of his ethnicity. Instead, we have attempts at recreating a late eighteenth-century Viennese setting with a small army of bewigged flunkeys (simultaneously masquerading as Monostatos’s slaves), a chaise-longue which provides the sleeping Pamina with her means of repose and which also accommodates the nonuplet Papagenos and Papagenas at the close, and a Louis Quatorze chair for the Queen of the Night. Marble columns at either side and huge grey walls (with a huge mullioned window for the boys to peer into) together with a blood-red backdrop on the first appearance of Sarastro are all stark rather than imaginative.

Humour is kept in check, though given the austerity of much of the stage-picture this was arguably appropriate. I missed a sense of wonderment – it’s not only the flute that is magic – not least in the garden scene where the animals (quite incongruously in zoological terms, chimpanzees cavorted with wild boar and stags) needed more inspired direction. And how to react to the gangster moll Papagena, by her own admission “eighteen years and two minutes old”, who tottered on in a mini-skirt and stilettos, her eyes further shielded in the gloom by sunglasses? Mozart depicted her before her miraculous transformation as a crone rather than a refugee from Soho. Something cheap and nasty – actually, a wooden contraption of sorts – trundles across the sky carrying the three boys. 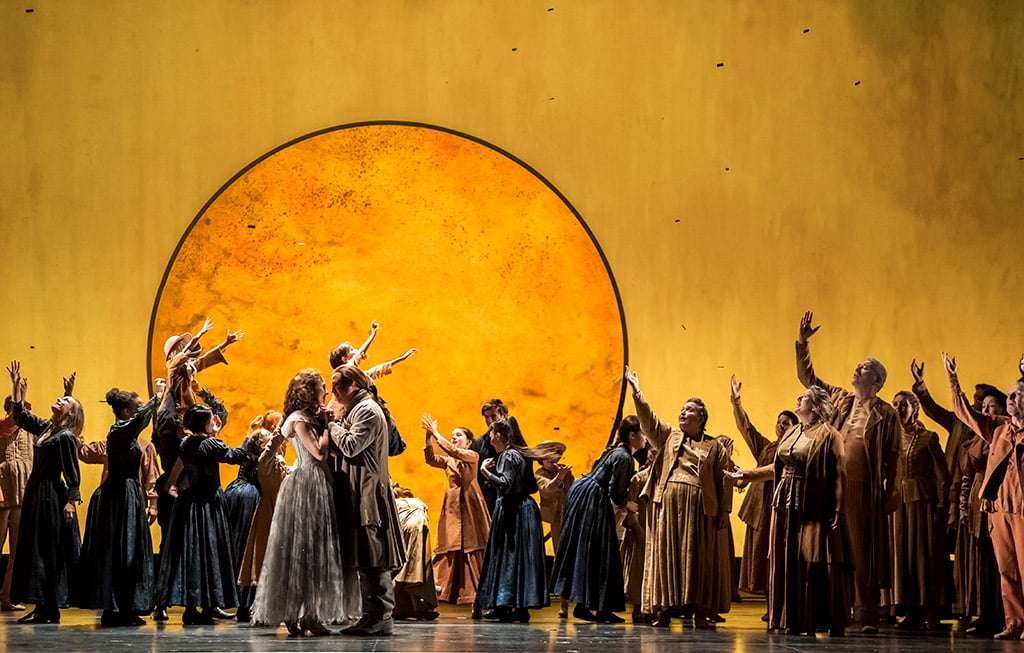 Even when visual representations lead to mental tut-tutting, there is always the musical side that can offer compensation. Thankfully, in this performance there was a great deal to savour. Leo Hussain had the full measure of the score, highlighting its dark solemnity in the Overture and elsewhere too, giving warm support in Sarastro’s ario “O Isis und Osiris”, adopting unforced tempos when Papageno accompanies his glockenspiel, yet driving along the concluding ensembles in both Acts with buoyant rhythms and finely-etched detail. Of the minor roles, I was much taken by the Three Ladies, both visually and vocally. Kitted out in glittering, identical black costumes and headgear, their trio appearances were choreographed to emphasise both unity of purpose as well as their own individual characters.

And what of the principals? Elsa Dreisig as Pamina delivered all that was expected of her and more, the creaminess of her voice with its honeyed upper tones providing many a moment of exquisite sensuality. The intelligent use of her vocal instrument was there to behold in the playfulness of her early exchanges with Papageno, sang with an earthy vibrancy by Vito Priante, but equally in the wonderful evenness of tone and seamless transition through the registers which she revealed in her great G minor lament in the second Act.

Benjamin Hulett was a fresh-voiced Tamino whose only failing was a tendency to strain for effect, especially above the stave. As if to underline the ambiguity of much of this work and the production itself, he never quite found a happy medium between the princely qualities the role requires and the occasional Jack-the-lad capers. 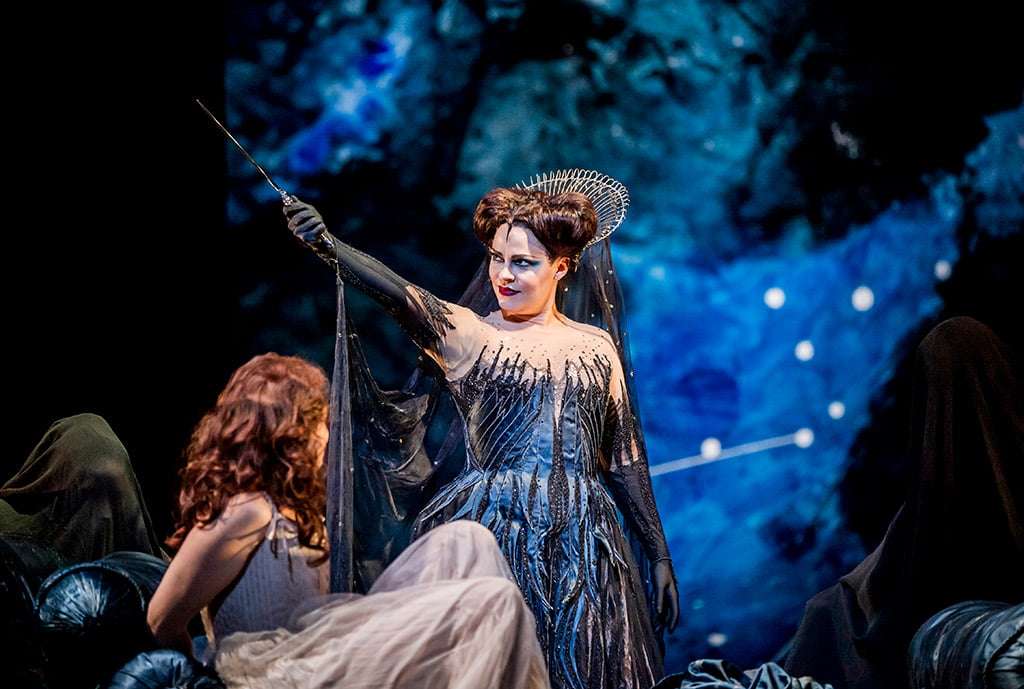 The Queen of the Night has two major arias, one in each Act. Tuuli Takala, making her house debut, was just a little squally and imprecise in diction when she bemoaned the evil man who had stolen her daughter from her. However, by the time she turned her wrath on her own child for refusing to carry out her instructions to murder Sarastro, the voice had assumed a chilling pin-point accuracy, delivered with absolute control and yet each note barbed with venom.

What are we to make of Sarastro himself? The kind of man who employs the lecherous Monostatos and enslaves a young woman but whose ability to forgive his enemies and express a deeper sense of humanity ultimately shines through. I can pay Andreas Bauer Kanabas no higher compliment than to state that he reminded me of his great compatriot Kurt Moll. Rock-steady and with a blue-black inky voice, he had commanding presence throughout.

For all its apparent contradictions, The Magic Flute encompasses Mozart’s supreme genius. Best summed up in Noel Petty’s ditty:

Some say that it’s all hieroglyphic,
And the symbols Freemason-specific.
Since I’m not of that sect,
They may be correct,
But it’s fun. And the music’s terrific.