Donizetti
L’elisir d’amore – melodramma giocoso in two Acts to a libretto by Felice Romani [sung in Italian, with English surtitles] 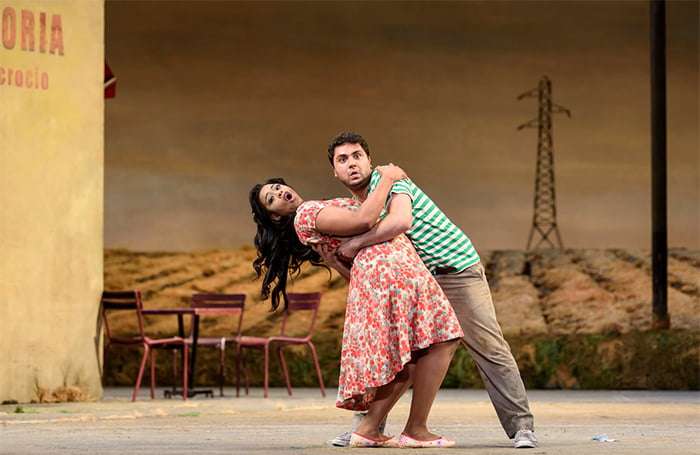 One of the reasons why L’elisir d’amore survives in the operatic repertoire, other than its fabulous tunes and opportunities for showy vocalism, is that at the close of both Acts Donizetti raises the comedy above that of the superficial and shows that the characters are flesh-and-blood beings – with hearts, souls, jealousies and anxieties. Such moments are deftly handled in Laurent Pelly’s busy ten-year-old staging, and register as something almost shockingly intrusive to the otherwise rather complacent and formulaic comedic routines. That they do so lends substance to what would otherwise become an overload of frothiness.

On this occasion the first of these instances, the moment where Nemorino suddenly realises he could lose his sweetheart to his rival, was superbly intense with Liparit Avetisyan using both subtle vocal colouring and sympathetic acting to make ‘Adina, credimi’ show-stopping. The ensemble then builds as Adina reveals her sympathy for the young man, whilst the bravado mask of Belcore slips when he shows a rather unpleasantly aggressive facet to his ostensibly genial nature as he threatens and insults Nemorino. The youthfulness of the current cast for this revival has brought these aspects into stronger relief than on its previous three runs. Likewise the reconciliation of Adina and Nemorino has all the necessary charm and romantic pathos. 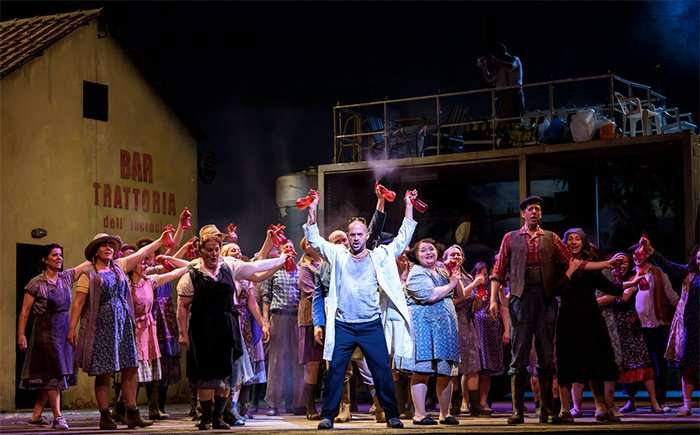 Pelly’s production wears its years well, and Daniel Dooner keeps the show taut and focussed. The transposition of the action to a 1950s’ rural Italy works well, and the designs are eye-catching – although the extended pause between the opening scenes of the first Act, facilitating removal of a mountain of hay-bales, interrupts proceedings for too long. The choreography is strong and sustains the action, although the gyrations required of the principals do begin to wear thin; that said, Avetisyan and also Paolo Bordogna managed to make them in-character.

For an opera in which young love is the focus this cast has youthfulness in abundance. At the centre is Avetisyan’s touching Nemorino – full of endearing gaucheness and naivety, and managing the transition from being tipsy to suddenly sober and desperate with dramatic aplomb. His lovely honeyed tone was heard to especial advantage in ‘Una furtiva lagrima’ – one could have heard a pin drop! Pretty Yende is a delightful Adina, her amorous vacillations nicely handled from an acting perspective and she displayed fine vocal technique and some dazzling embellishments. It’s an attractive voice and she’s a natural – maintaining sympathy for this capricious character.

Bordogna’s Belcore has vocal suavity and just the right level of strut; the latent dark side to the Officer’s nature was always hinted at. Alex Esposito brings an incisive dark-toned quality to Dulcamara, relishing the patter and the opportunities for play with consonants. His is a slightly disturbing interpretation of this classic buffo role – a hint of nastiness in his confidence-trickster activity was evident. There is comedy too, his facial expression as it appeared his ‘elixir of love’ does work a fleet masterpiece of timing. Vlada Borovko’s Giannetta is somewhat lightweight, but she made her mark in the scene with the ladies in the second Act.

Bertrand de Billy elicits great playing throughout, such as the delicate flutes, the marches with real swagger and the bassoon and harp interplay during ‘lagrima’ was enchanting. The Chorus was on fine form – demonstrating collective ability to control dynamics and relishing their dance routines. All very engaging: you don’t need a swig of Dulcamara’s universal cure-all potion to love it!